Well, not much of a work day, but I got my milestone done anyways.  We ran down to the coast with the dogs in the morning, and while we were down there, my allergies starting getting bad, to the point that when we got home around midafternoon, I immediately drugged myself and took a nap. I woke up feeling a bit better, so I headed out to squeeze some rear spar rivets.

Not really much interesting happened with this, though I had a couple of ribs whose flanges wanted to pop away from the spar web when I squeezed the rivets. I ended up drilling out a few rivets and working up a system with a wood block and a clamp to hold the flanges flush while staying out of the way of the squeezer. Once I got that technique down, I had pieces sitting nice and flush. I also inexplicably found a couple of empty rivet holes between the rear spar web and the reinforcement fork, which I riveted together over a year ago. I guess I somehow thought those were holes I needed to leave open for some reason. Who knows…I just squeezed the rivets in there and moved on.

There were a couple spots on the rear spar where the primer had gotten messed up, so I decided to shoot some touch-up primer. While I was at it, I took care of another task that I should have done a long time ago. The main spar is gold anodized, but the spots where it’s countersunk for the tank attach screws are supposed to be spot primed. Since I was priming anyway – the main consequence being that I turned the A/C off and opened the door (in the process realizing that Houston in August is still stupid hot even at 10 PM) – I decided to mask the left skeleton and shoot primer there too.

Lots of masking tape and newspaper: 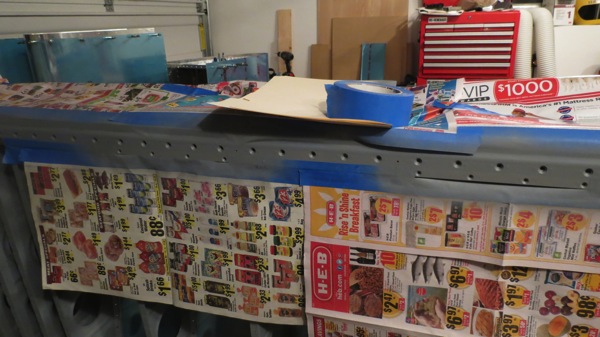 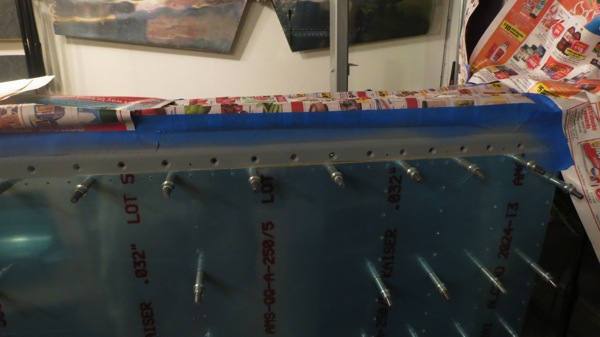 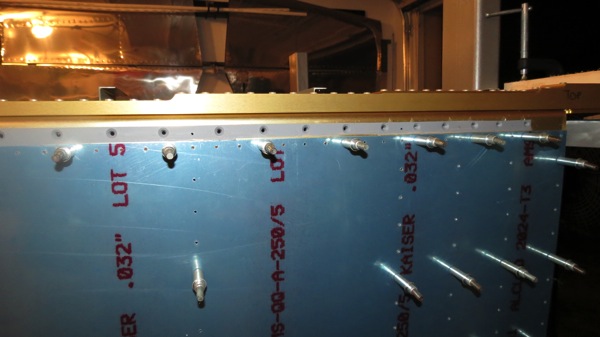 Looks a little bit ghetto, but I’m not really bothered. This area is going to be covered anyway.

After letting the primer fumes die down for a bit, I recruited Josie to help me move the right skeleton onto its stand. Now I have *two* wing skeletons! 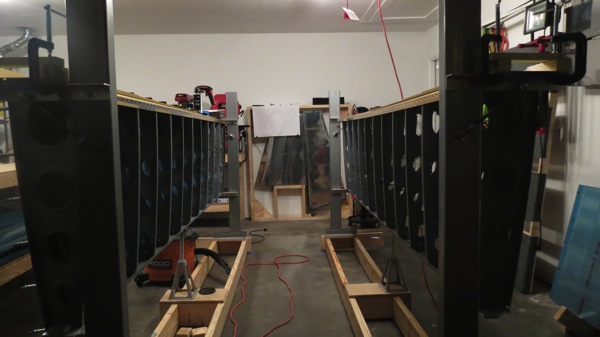 The sag in the right wing (right side of the photo) is pretty noticeable. All I did was bolt/clamp the main spar to the stands tonight; I still need to go through the whole ritual of removing the sag, checking for twist, and finally clamping the rear spar to the stands as well. I’ll do that tomorrow night and maybe go ahead and mask the right spar and prime those countersink holes too. Might as well go ahead and get them done now.

It shouldn’t take me too long to get the right wing to the same point of assembly as the left one – I think the main tasks are going to be match-drilling the skins and fitting the leading edge and tank. Or to put it another way, I don’t think I’m going to be able to put off sealing the tanks for much longer…