This post sort of covers two days. I did get out in the garage last night, but only for about an hour. All I did was prep the replacement rib I got in from Van’s; reamed the spar attach holes to #30, cleaned up the edges, checked the flanges for squareness, fluted the thing, and undertook my favorite task of removing burr in the tight spots with needle files. I also drilled the holes in the lightening hole for the wing conduit, and finished off the night by getting Josie to help me move the right spar back to the workbench.

Saturday, the first order of business was to get that rib primed. After it was done and drying, I recruited Josie to come out and help me shoot rivets in the main spar. She also had a good (but late) idea; she asked why some of the ribs were already riveted, and I explained that with the flanges facing one way, I could easily access both sides and shoot the rivets solo, but when the flanges faced the other way, it was too awkward. She gave me a funny look and asked why I didn’t just turn the spar over.

It’s amazing the things that you never think of until someone else points them out. *sigh*

Anyway, we got all those rivets shot, and then I moved on to the two remaining inboard ribs. Before riveting those, I made use of what I’d learned about the tank attach nutplates. On the left spar, I riveted those before riveting the wing walk ribs, since I’d have a lot more room. Then I learned that I needed the nutplates out of the way so I could drill the inboard tank attach angle. Well, in this case, it occurred to me that there was no reason I couldn’t go ahead and drill that attach angle, so I did just that.

Then I set about riveting those nutplates. I didn’t have much problem on the left spar with these, but here I did much worse. I had ridiculous trouble keeping the flush set in place, and messed up two rivets. And since I was using NAS rivets here, I didn’t think I could safely drill the heads off, so instead I ground off the shop heads with a Dremel, which also messed up the nutplates.

I then took a different approach to these things. I recruited Josie once again, this time to help me back rivet those nutplates. Obviously the back rivet plate won’t work here, but really all you need is a good flat object to hold on the manufactured head side. So I just gave Josie the tungsten bucking bar, and we shot all four rivets in about five minutes, and they were beautiful.

That just left the two inboard ribs to rivet, which I easily did solo, and then it was time to bring out the rear spar and cleco it in place. I briefly considered squeezing a few rivets back there, but it was after 11 and I figured I’d quit for the night. So instead I cleaned up a bit, and of course took the requisite photo of the skeleton: 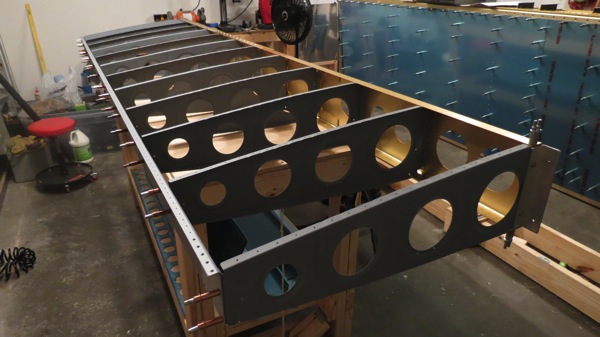 But it turned out I wasn’t done. I was about to head inside, feeling quite good about myself, when I looked at the inboard-most rib. Turns out I drilled the holes for the wing conduit mount on the top of the lightening hole instead of the bottom: 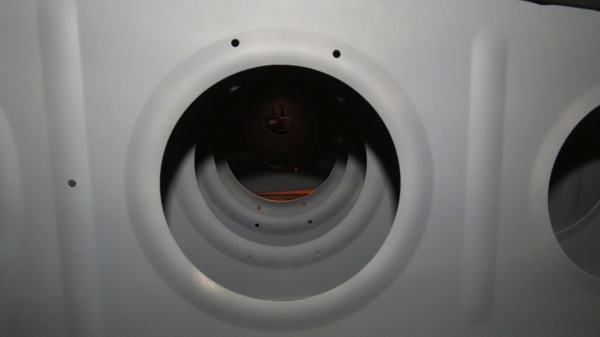 At least I still had my drilling jig around, so it was a simple matter of clecoing it in place and zapping the two holes.

I also took an inventory of my K1000-3 nutplates, which are the ones used for the tank-spar attach angles. When I grabbed the three to rivet to the spar, it didn’t seem like there were many in the bag. I wasn’t sure how many extra were in the kit, but I’d ruined two tonight in addition to the three I removed from the left spar, so there was a good chance I might be short. And I was right – I only have thirteen left, but I need eighteen for the remaining attach angles. We’ll, it’s been a while since I sent Aircraft Spruce some money.

Since I was already ordering from them, I also ordered some MSP-42 and -44 blind rivets. I’m going to use these to rivet the leading edge assemblies to the main spars instead of solid rivets; things are really tight up there, and Van’s has approved the use of LP4 blind rivets here. I’m going a step further by using the stronger Cherry rivets, partially because I already have a big bag of MSP-43s. I also ordered a tube of fuel lube, which I’ll eventually need for some tank fittings and so forth.

Tomorrow I should be able to get the rear spar riveted, and then this skeleton can go live on the stand for good!