So when we left off yesterday, I’d victoriously dropped the fuel tank onto the spar, only to find that the joint plate was too wide. As such, the first order of business today was to fix that. First off, I measured the gap with the tank slid as far outboard as possible; this way I could tell what the minimum amount of material to remove would be. Turned out to be a hair over 1/8”. After removing the tank and measuring the exposed joint plate, it turned out that I needed to remove enough material to leave 11/16” of an inch showing. Which is – surprise! – exactly what the instructions said in the first place. Though, in my defense, the wording was something like “there should be 11/16” instead of “make sure there is exactly 11/6”.

Whatever. So I went ahead and marked a cut line all the way around the plate:

I’d spent a bit of time mulling over the best way to make this cut, and I eventually settled on just using the snips. The downside of the snips is that they leave a rough surface that needs a fair amount of cleanup, but about the only other method I could think of was to use a Dremel cutoff wheel, which is just annoying and imprecise. So I pulled the plate off and went to town with the snips.

it was a long and tedious process; the plate, after all, is something like four feet long, and with it being curved, that just adds to the fun. By the time I finished the cut, my hand felt on the verge of cramping. Now I had a nasty rough edge, so I broke out the vixen file and went to work. This, too, proved to be difficult, as there wasn’t much of a good way to clamp the curved plate, so I ended up just holding it in one had while I filed. If this sounds iffy, good call. In the course of the filing, I learned that a vixen file will remove skin just as effectively as it will remove aluminum.

Finally, I had the thing cleaned up, and I finished it off in the bench grinder for a nice edge. All told the cutting, filing, and general cleanup took me almost an hour.

So I put the plate back in place, put the tank back on, and all was well. Now the tank sits nice and tight against the leading edge: 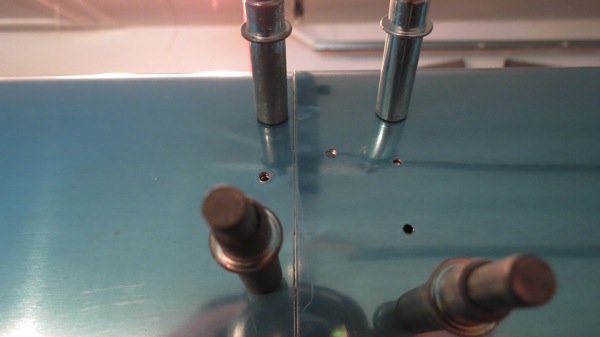 With that done, it was time to drill the tank attach brackets. With the tank slid over in place, I put a couple of ratchet straps around the wing to hold the tank nice and snug: 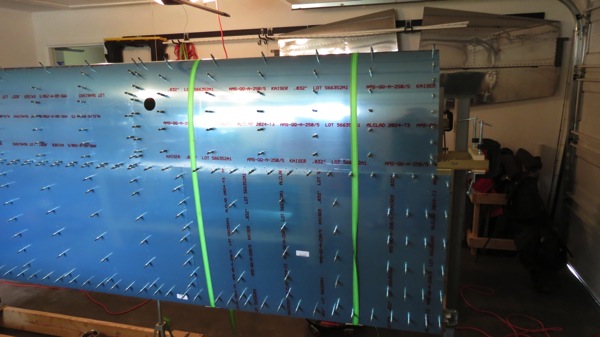 The inboard bracket is drilled first, because, well, it’s the only one visible. These holes are kind of nerve-racking to drill, what with the spar right under them. I used a drill stop for all these holes, and I checked the thing about every five holes to make sure it wasn’t coming loose. Soon, the inboard bracket was drilled: 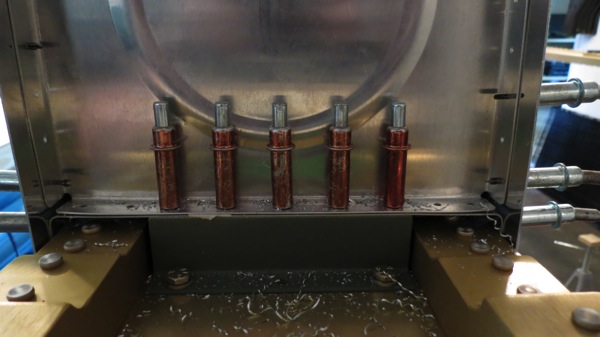 Next, the leading edge assembly comes off to reveal the outboard bracket, which can then be drilled: 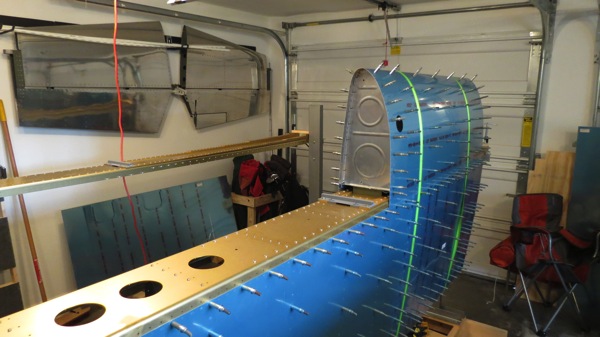 And finally, the clecos between the tank skin and the baffle and outboard ribs are removed, allowing the interior brackets to be drilled in place: 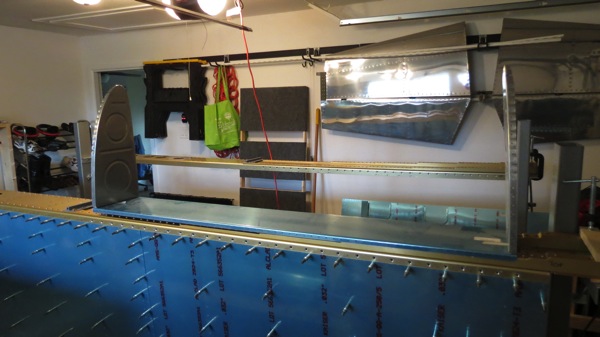 Since I don’t really have anywhere to store the leading edge and tank assemblies, I just put them back on the spar for now. Then, I decided it was high time I got to working on the right wing, so I clecoed the right skeleton together and got it all match drilled. About this time, dinner showed up, so I decided to call it a night.

I’ll be out of town next weekend, so I guess the next opportunity to get the right ribs primed will be two weeks away. I suppose I’ll get them deburred this week so they’ll be ready to go when I get some good priming weather. In the meantime, I can work on some of the common tank pieces – there are a number of things to fab up, like stiffeners, mount plates, fuel lines, level sensors…yeah, no shortage of things to do.