Technically, I did a little work last night, but not enough to merit writing an entry. All I did was go out and finish stapling the carpet onto my C-frame table thingy, which took maybe half an hour. I also placed a nice-size order with Van’s on Friday: replacements for my damaged skins, replacement tank brackets (plus a few extra for good measure), tank sealant, and a few other sundries.

Today, I set out to redeem my bracket mangling from out last outing. First up was to drill the inboard bracket (for the third time). This time I got the center hole where it was supposed to be, squared the bracket to the spar, and drilled the other two holes. Nothing to it when you actually use a good sharp drill bit: 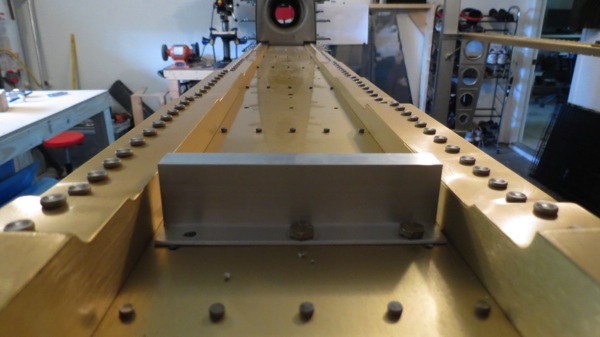 Next up I drilled the center bolt hole in the other six brackets for this wing. To help to this in a consistent fashion, I only measured the first bracket before drilling, and then I set up a little arrangement on the drill press table so I could quickly drill the other five brackets: 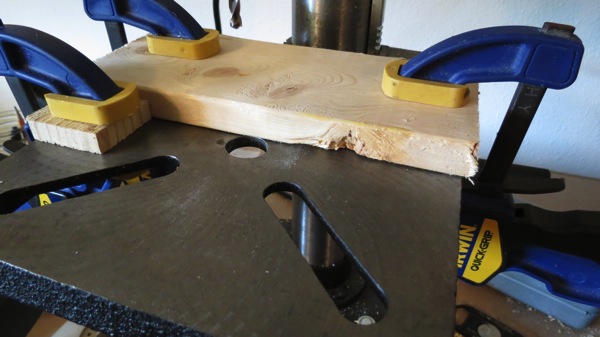 I’m leaving this in place for when I get the replacement brackets next week; at that time, I’ll go ahead and drill the six outboard brackets for the right wing as well. Might as well go ahead and get them done, even if that skeleton isn’t together yet.

From there, I went down the spar, bolting each bracket in place and drilling it using the spar holes as a guide. The work went fairly quickly, although it left a large amount of metal shavings in my previously spotless wings: 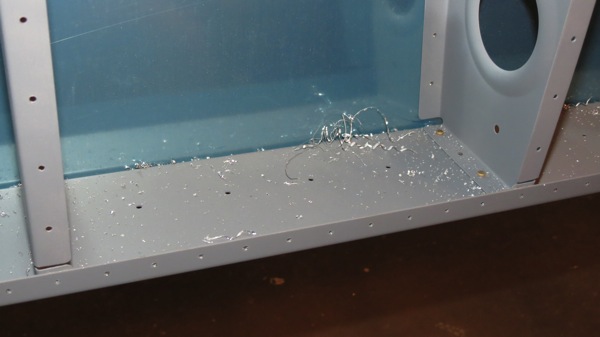 Oh well, that’s what the shop vac is for. Next, the outboard brackets get drilled for nutplates. There are nice little jigs out there for drilling nutplate mounting holes, and I hear they’re nice, but honestly, I didn’t find it to be too tedious at all to just use the nutplates as my patterns. I picked out three nutplates to be sacrificial, since I’d be bolting/unbolting them many times. This let me set up each bracket and drill all its holes in quick succession: 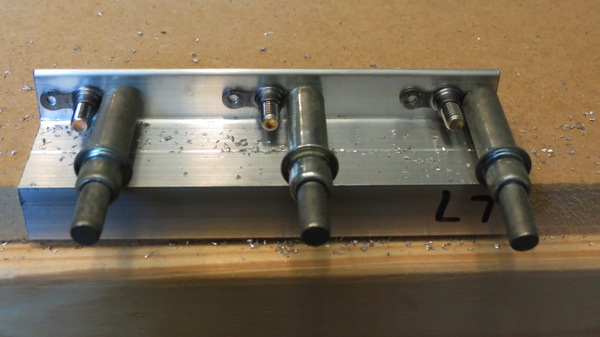 Next I gave all the brackets a good deburring, both the holes and edges (the edges were pretty rough). Then I countersunk the opposite face for the flush rivets, since this side will sit against the spar. Finally, it was out to the back yard for a good cleaning and priming. I masked off the bracket face that will attach to the tank baffle; this will get a coat of sealant, so the primer would be counterproductive to getting a good seal there.

Here are all the primed brackets in place, ready to be bolted on for tank fitting: 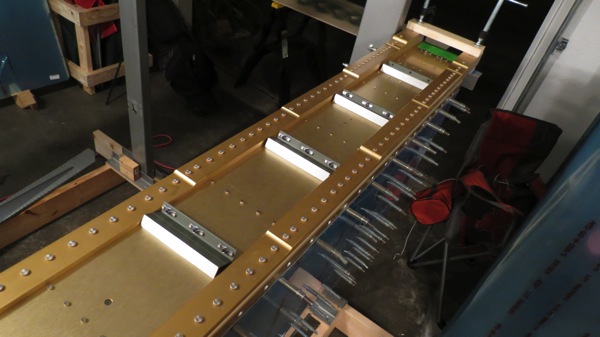 Now it was time to cleco the tank assembly together. This was a real chore; the leading edge is tough to get together, but the tank skin and ribs are made of thicker material, and it takes a fair amount of force to get some of this stuff into alignment. Oh, and I ran out of silver clecos while doing this, and had to kind of ration the things to get everything together. Guess it’s time to order some more.

But finally, it was all together and it was time to set it on the spar and see how everything fit. And it’s hard not to cackle when you see this sitting in your garage: 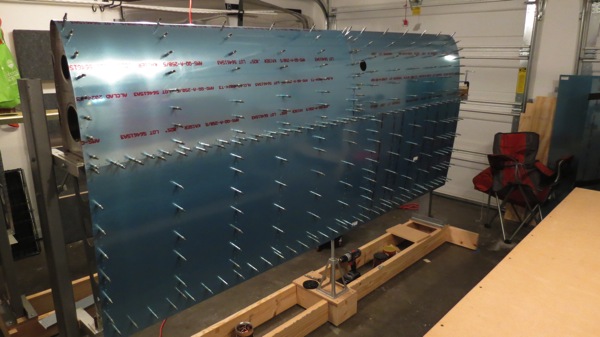 Except there was one problem. Back when I was doing the leading edge joint plate, I found that I had more plate sticking out than expected, and I was worried about it interfering with the tank rib, so I moved it outboard a bit before drilling. The good news is that my concerns were well-founded. The bad news is that I still have an interference problem. This is as far outboard as the tank will go before the rib makes contact with the joint plate: 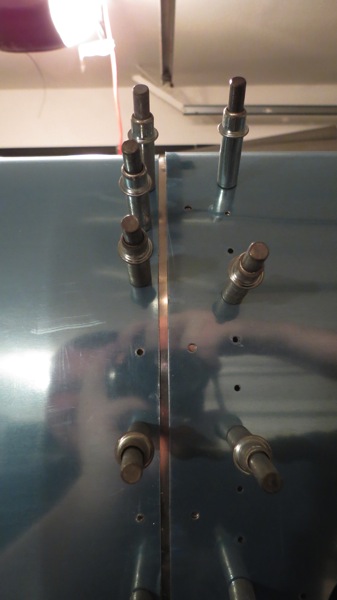 So I’m going to have to trim that joint plate now, which will be a bit of a pain. Since the plate is bent, I can’t just run it through the band saw. I guess I’ll probably have to remove it, draw a guide line, and trim the thing with my snips.

I’m kind of glad I’ve held off on the right wing skeleton. On the one hand, if I was doing these tasks on both wings simultaneously, I could probably go a little faster by combining tasks. But on the other hand, I’d be making mistakes like this twice. Now, when I do the right wing joint plate, I’ll know better than to fudge the specs.