First order of business today was simple: drilling the skin hole for the tiedown attach to full size. I actually skipped a step a while back that’s relevant here; the plans tell you to draw a couple of lines on the bottom skin that intersect at the center of the tiedown attach bracket. Then, when you set the leading edge in place, you’re supposed to use those lines to determine if the prepunched hole in the leading edge is located correctly. Well, I forgot about those lines until I’d already pulled the bottom skins off. Whoops.
But it’s actually pretty easy to check the location of that hoe otherwise. First off, there’s a gap between the skin and the attach, so you can see in there a bit; it appeared that things were aligned OK. To double-check this even more, I found an Allen wrench that fit in the skin hole, inserted it, and angled it until it hit the edge if the hole in the attach bracket. In this way, I could look at the angle and pretty effectively determine if things were OK, and they were. Si I busted out the Unibit and drilled the hole up to 3/8”. I don’t have the tiedown eyes, but I screwed in a carriage bolt to check the fit, and it looks great: 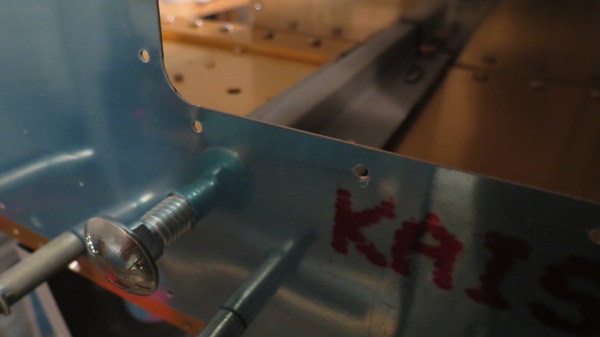 Then it was on to the tanks. Now, somehow I got the idea in my mind that tonight I’d be setting the temporarily assembled tank on the spar and looking at a whole wing-shaped object. That was…a bit optimistic. There’s a good bit of work that has to be done on the tank attach angles first. I dove in headfirst with the inboard angle. This one is different from all the others in that the bolts go in from the forward side and screw into nutplates riveted to the spar, wheres the other angles have nutplates riveted to them, and the bolts go in from the back side. I started with the inboard one because this is where I riveted those nutplates ahead of schedule, and I wanted to go ahead and find out if that was a mistake.
First, I laid out the spot for the center bolt (of three) and drilled it to full size on the drill press. Then I bolted the angle in place and squared it against the spar bars. Since I’d be using the nutplates as a guide, I’d have to drill the other two holes undersize at first and then enlarge them in the drill press. The first problem was picking the right bit. #30 was kind of small, and didn’t fit the nutplate very well; not good for precision. #19 was too big. So I busted out my cheap drill bit set (MISTAKE) and went with a 5/32” bit. I wrapped it in a layer of blue tape to hopefully avoid messing up the nutplate with the bit.
Somehow it never occurred to me that I’d be drilling these holes from between the wing walk ribs, a rather narrow space. I had to hold the drill really awkwardly, but I got it in place and drilled the first hole. Then I removed the angle from the spar, drilled that hole to full size, and bolted the angle back on with those two holes. Repeat for hole #3, and…immediately I could see that the holes weren’t straight. The angle had apparently moved while I was drilling hole #2, probably because that crappy drill bit was taking forever and I put some extra pressure on it.
Drilling through the nutplates wasn’t the direct cause of this, but it was clear to me that my from-the-hip solution wasn’t helping matters any, so I went ahead and drilled out all three nutplates. I grabbed a fresh attach angle, intending to try the inboard one again, but this time I misdrilled the first hole, such that I couldn’t even get a socket on the bolt to put it in place. ARGH
I was pretty disgusted with myself, so I abandoned the tank stuff for the evening and decided to work on something else: building a table for the C-frame. I got away without this while doing the tail, but it was kind of a pain. I feel this will be a necessity for dimpling the big wing skins. I picked up and cut the lumber over the weekend, and it’s just been sitting around waiting to be assembled.
Here’s the assembled frame. I built it such that the C-frame can be placed in any one of three spots, for extra flexibility: 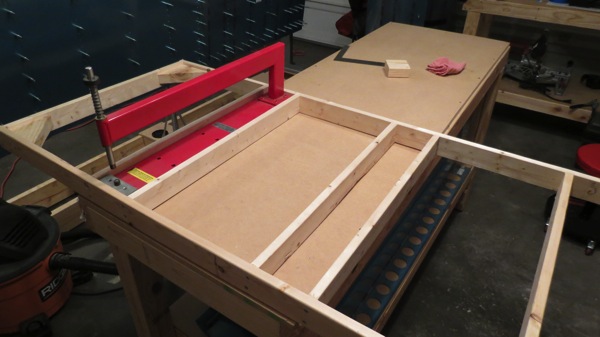 I started adding the carpet on top, but it was getting late and I was getting tired, so I quit after just putting one of the three panels on: 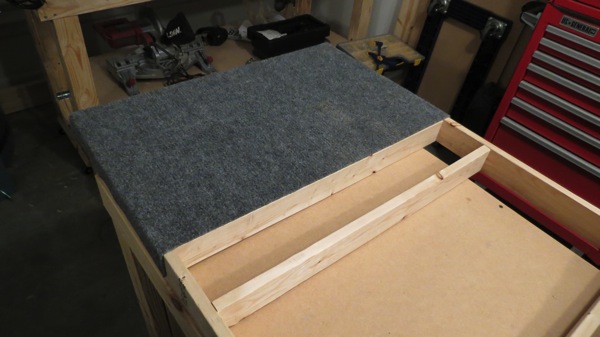 I guess tomorrow I’ll try the tank attach angles again, or I might just take the evening off and try to think through this problem a little better. I’ve got to place an order with Van’s soon anyway; I think I’ll just go ahead and order a bunch of extra attach angles. I doubt they’re expensive at all.