Very productive day today. I picked up where I left off last night with the wing walk doubler. The basic procedure here is to lay the doubler in place under the skin, and then use the skin as a drill guide to drill all the holes to the ribs. I put a piece of my scrap MDF on the bench top to drill into, and used a drill stop to ensure I didn’t drill right through that MDF. The nice thing about clecos is that you can merrily cleco aluminum into the wood underneath it. In this case, I lined up the doubler and initially clamped it in place with cleco clamps. Then I drilled a couple of initial holes and used those to cleco the whole works to the MDF. That gave me alignment so I could remove the clamps and finish drilling the rest of the holes.

I totally meant to get a picture of the finished doubler, but I forgot and all I have is this photo of the skin clecoed down over the doubler: 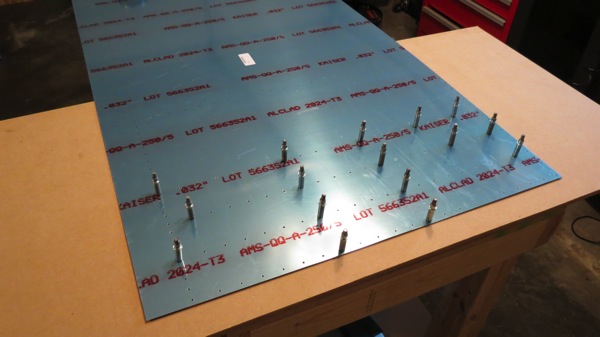 From here, it was time to cleco all the top and bottom skins in place and match drill them. But first I wanted to see if I could rearrange the camp holding the inboard main spar to the wing stand. I did some tinkering around here, but never did come up with a good idea. I tried just clamping one side of the spar, but that kind of torqued the whole assembly and in general wasn’t going to be conducive to building a straight wing. I was getting a bit frustrated, just about resigned to having a clamp in the way for the foreseeable future, when suddenly an absurdly simple solution came to me. You see, the bolts that hold the horizontal pieces to the stands go all the way through the upright. All I had to do was switch the horizontals to the outboard side of the upright.

All that worrying and frustration, and I ended up solving it just by undoing and replacing four bolts. *sigh* Now I had plenty of room on the inboard end: 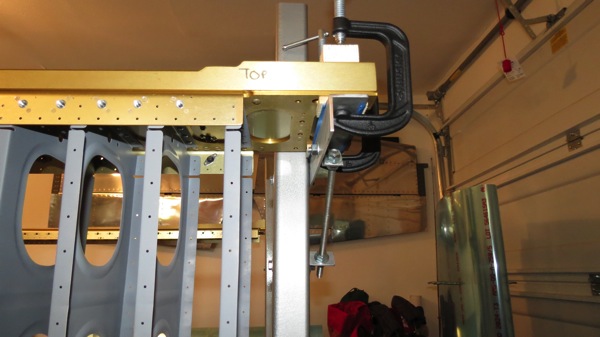 Better yet, this made it far easier to get the wing set up securely. Ever since I found out I made the bases too short, I’d always been looking at the stands with an attitude of “well, I can work around this.” That is, I knew it wasn’t right but I figured I could make do. Now, however, the setup is really and truly right. I can clamp the inboard end down securely, and instead of tweaking things manually to remove twist, I can use the adjustable horizontals and make a truly repeatable setup. Basically, this made me very happy, even if it did mean having to go through the whole routine of leveling the setup, checking for twist, taking the sag out of the spar, etc.

Finally, time to start clecoing the skins on. This isn’t an especially complex procedure – there are four skins, two top and two bottom, plus the wing walk doubler. The main deal is there are a lot – and I’ll repeat, a lot of holes. Even clecoing only every fourth hole or so, I used about 75% of my silver clecos, three coffee cans worth. (I think the coffee can is the official unit of measurement for clecos. You can count them, but that’s way too much work.)

I asked Josie to come out and grab some photos of me actually working on the wing, which is what you get to see now. 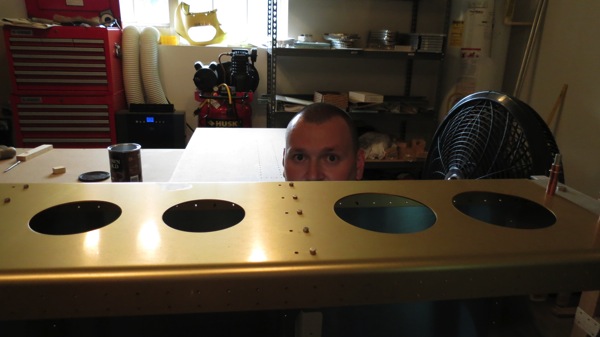 I had a helper come out for a bit too. Astute observers will note that I’m scratching his nose with one hand to distract him so I can place the cleco with the other: 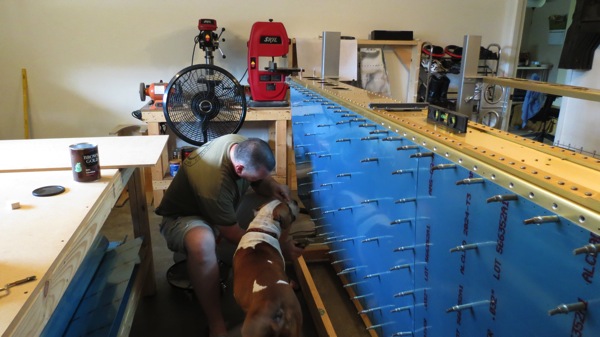 And then I was done with the top skin, and there were two dogs, and there had to be a photo op: 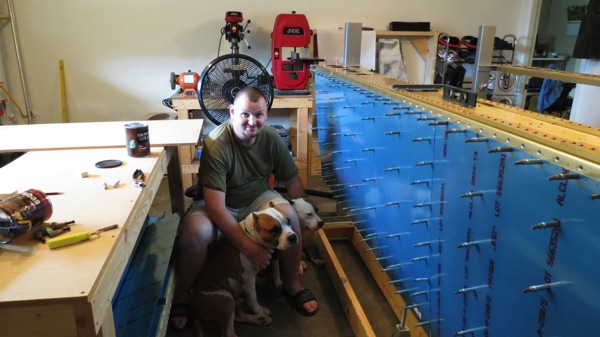 OK, on to the bottom skin. But first, here’s a photo from the bottom. The shiny stuff on the left is the wing walk doubler. See, I told you I made it! 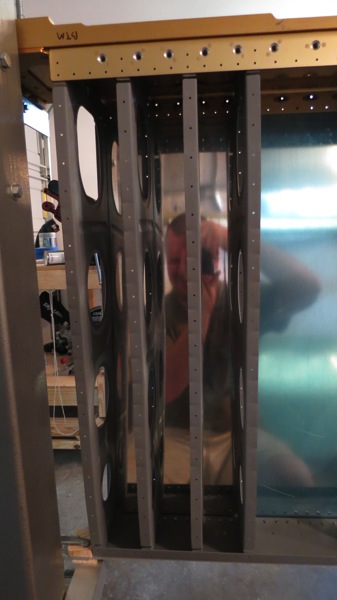 OK, now to really put on the bottom skins. Let’s start with the inboard one. Oh wait, something’s wrong here. Argh, the bottom inboard horizontal arm interferes with the skin! And here I thought I was done modifying these stands… (The skin is supposed to align with the rib visible to the left.) 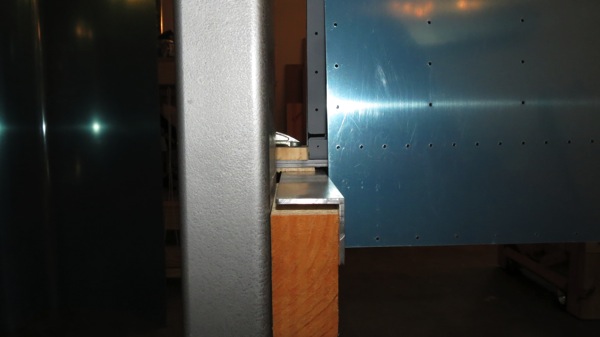 After mulling over this for a bit, I decided to just replace that big piece of angle with a smaller piece from some scrap I had lying around. These pieces are just held in with self-tapping bolts, and they don’t go all the way through the upright. Oh, and they’re long enough to account for those 2×4 blocks. Rather than go run to Home Depot for shorter bolts, I made a little wooden spacer so I could reuse the bolt I had. Excuse me? Ghetto? The term is “redneck engineering,” thank you very much. 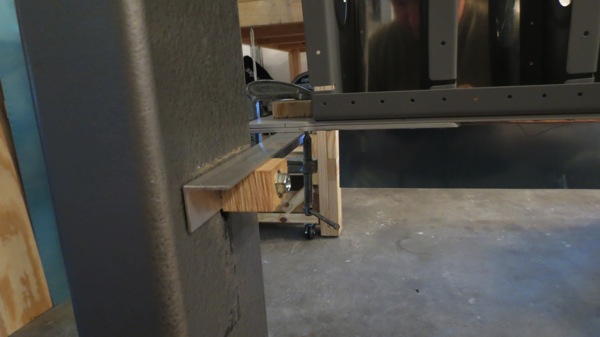 Anyway, where was I? Oh yes, clecoing skins. Back to that. Another half-hour or so, and the bottom skins were in place: 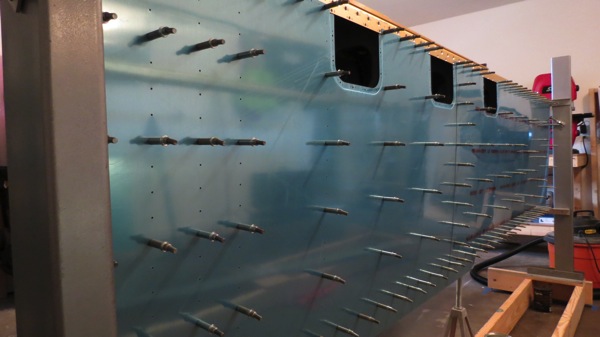 OK, time to bust out the drill and reamer and get to match drilling. I started with the top skins. The fun thing here is just how much things scale up from the tail kit. After feeling in danger of a hand cramp from the cleco pliers, I moved on to my right index finger getting tired from squeezing the drill trigger over and over and over and over again. And my arms were tired from holding the thing up. I can’t imagine trying to do this with, say, a heavy cordless drill (though the air hose presented annoyances of its own).

Eventually, the top was done, and it was getting on to about time for dinner. At first I was going to break for food and then match drill the bottom skins, but we decided to watch a movie instead, so that was the end of airplane work for Saturday. Tomorrow I can finish the match drilling, then move on to the leading edge and tank stuff. But at some point I should get to match drilling the right wing; that way I can take advantage of the next good weather weekend and get that thing primed and then riveted together.