Short day in the garage today. I had originally planned to go fly a bit today to stay current, but I fell victim to the notorious fuel-injected Lycoming hot start affliction. I couldn’t get the Arrow started to save my life, and after about five tries, it didn’t even want to turn over. I took mercy on the starter and gave up at that point. I then learned that they’ve been having hard start issues with the plane anyway, and it was going to get new mags installed that very afternoon. So I gave them an extra couple hours to work on that and saved myself a couple hundred bucks. On the way home, I stopped at Home Depot and bought some C-clamps and plumb bobs so I could finalize the left wing on its stand.

Back at home, after goofing off for a bit, I got to work. The first order of business was to finalize the clamping arrangement for the inboard main spar. I had just put some of my quick clamps on for a temporary fix, but now the C-clamps I bought would do the job. But first I needed something to pad between the clamps and the spar reinforcement bars; I don’t want to mar up those beautiful pieces of work. Some scrap wood from the H-stab moving fixture worked great, but only after I drilled some shallow holes to fit over the big shop heads on the spar.

Once I got to clamping, though, I realized things were going to be tight. The bases I made for the wing stands are barely long enough to fit the wings, a problem that annoys me greatly. You see, when I first sketched out those bases, I figured that the lengthwise pieces should be 120” long. This was especially convenient, since I could just buy 10’ 2x6s and not have to cut them. But then I reviewed my plans before I got to building, and somehow I convinced myself that 120” might be too long for the spars, and so I cut each piece down a couple inches. So basically, I second-guessed myself for no good reason and actually created more work out of it. *sigh*

Anyway, thanks to that little bit of stupidity, things are pretty tight on the inboard stand. The clamp kind of has to sit in this position, which is going to put it in the way when I’m skinning and so forth: 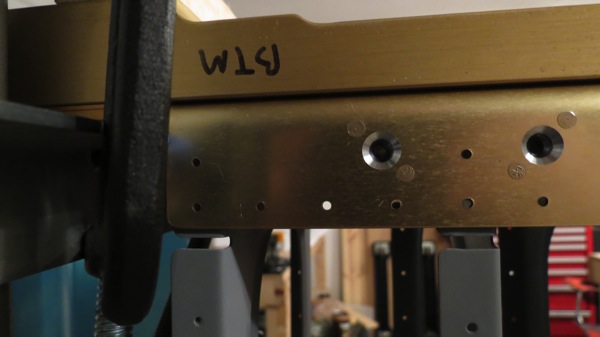 However, after reviewing the plans, I see that the fuel tanks sit a bit further outboard than the skins, so I think I may be able to flip this clamp and get some better working room. But I discovered that towards the end of the night, so I’ll wait until tomorrow to test that theory.

Next task was to put the plumb bobs on strings and hang one from the main spar on each end of the wing. Then I could measure the distance from the string to the rear spar and ensure that I had the same measurement at both ends, and in turn ensure I wouldn’t build any twist into the wing. I was actually a bit surprised by this, as I found about a 3/16” difference with the skeleton hanging naturally. So I did some adjustment of things before clamping the skeleton down fully, and now it’s nice and square. 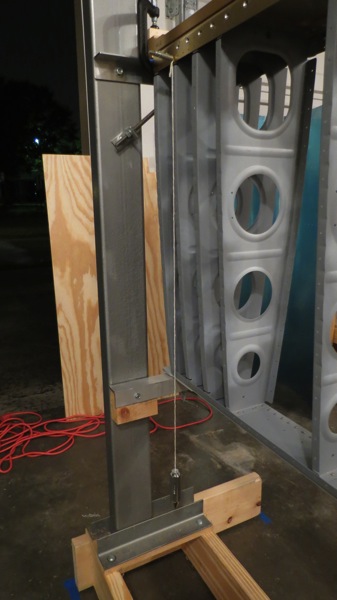 Now, what to do from here? My original plan was to start working on the right wing skeleton; I could go ahead and cleco/match-drill the ribs, then deburr and try and get everything primed this weekend. But the weather has been spotty lately, with frequent afternoon storms and showers, and since I prime outside, that’s a bit of a problem. I decided instead to move forward with the left wing. The general path from here on out is to fit and match-drill the wing skins, fit the leading edges, and then move on to the joyous world of fuel tanks and Proseal.

First though, a wing walk doubler must be made. This goes under the main wing skin on the inboard part of the wing; this is where people will walk while getting in and out of the aircraft, so some extra structural strength is needed here. This is also one of those parts of the project where Van’s does not give you a nice prefab, prepunched piece; you get to cut these to size out of a larger sheet. And since the finished product is relatively large (9 3/8” x 26”), it’s too big for me to cut stuff on the bandsaw. Time to break out the snips

This led to an amusing farce during which I was looking at my three pairs of snips, trying to remember/figure out which was which: straight? left? right? ARGH. Well, straight was easy to figure out, and I’m making a straight cut, so I’ll just use those. It wasn’t so bad once I just got to work. After rough cutting with the snips, I attacked the edges with the vixen file to smooth them and shape to the final size, and then all the edges got cleaned up on the scotch brite wheel. The next step is to clamp this in place on the inboard wing skin and use the skin as a drill guide, but it was getting late by this point , so I knocked off for the night. As such, all I have right now is a rectangular piece of sheet. Holes will be forthcoming: 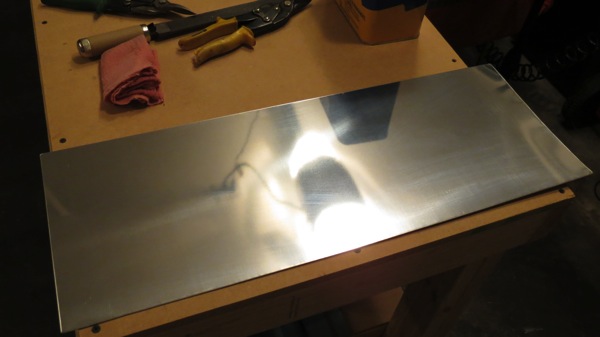 Side note: the little strip of aluminum I cut off with the snips curled up into an amusingly consistent spiral. It actually looks kind of cool. I should save these and sell them as modern art sculptures or something. 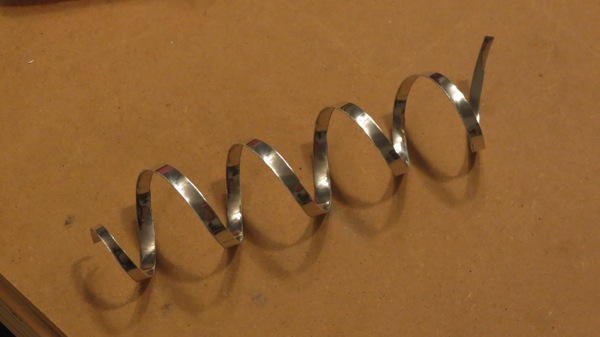