Not much to report today. I recruited Josie to come out and help me rivet the ribs that I couldn’t do on my own. It was a bit odd at first (I may have some mild control-freak tendencies), but pretty soon we got into a good rhythm and before long everything was knocked out.

The dogs came out to hang with us as well; I figured it wouldn’t take much riveting to change their minds, but I was only half right. After about the second rivet, Mae retreated back into the kitchen, but Dood (yes, that’s his name) just kept lying on the floor without an apparent care in the world. So we decided to have mercy on his ears and put the Mutt Muffs we got for Mae on him. 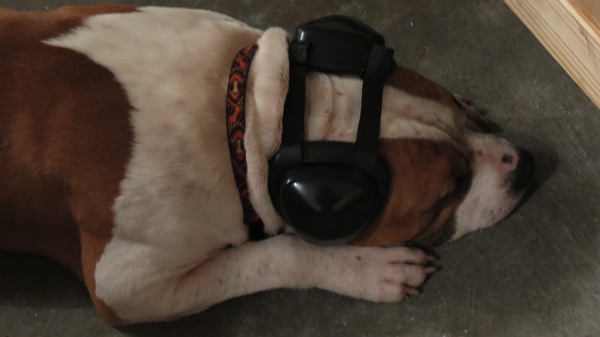 I had originally planned to finish out the night by at least starting to squeeze the rear spar rivets, but after clecoing the spar in place, I discovered that I can’t squeeze them with the setup I have now. I have a long flush set for the squeezer that would allow me to get around the spar channel, but it’s too long to get it on the squeezer with the other set. I could shoot these as well, but access would be tougher than the main spar, and it’s a lot easier to get consistent results squeezing. So I’m going to order a longer on yoke this week and hold off on the rear spar rivets.

I figure tomorrow I’ll put the left wing on the stand and start match-drilling and generally prepping the right wing ribs. I might even be able to get all the way through cleaning and priming them tomorrow if I can actually get my butt in the garage early in the day. I need to get on building the other wing stand too…