Yes, that’s really all I did today. My work ethic hasn’t been so great, and a lot of the problem is me being a little insomniac. I stay up too late, then I’m tired the next day, I try to resist the afternoon nap urge, but inevitably I give in, and then at bedtime I’m not sleepy, and the cycle continues. We did get up at a decent hour today so we could take the dogs to the Houston Arboretum for a little walk through the woods. We wanted to go early in the morning before it got too hot, but seeing how this is Houston, it was still pretty hot for a 3/4 mile walk even at 10 AM. When we got home I was tired and sweaty, and then I realized that I needed to run to the grocery store. Long story short, I got that done along with some food prep and finally got out in the garage around 2.

Instead of jumping into riveting ribs today, I took a detour from the instructions. I’ve been reading over Jamie Painter’s build log from time to time, trying to get insight into upcoming tasks, and I ran across something useful while reading about building the tanks. It seems there are three nut plates on the inboard end of the spar, part of the tank attach system. This area of the spar is also where the wing walk will be; that is, the reinforced part of the wing that passengers will be stepping on. As such, the ribs are spaced much closer together. That means that if I wait until later to do these nutplates, I’ll have to work in a fairly confined space.

Here’s where the nutplates will live; each of those sets of one large and two small holes is a nutplate location. 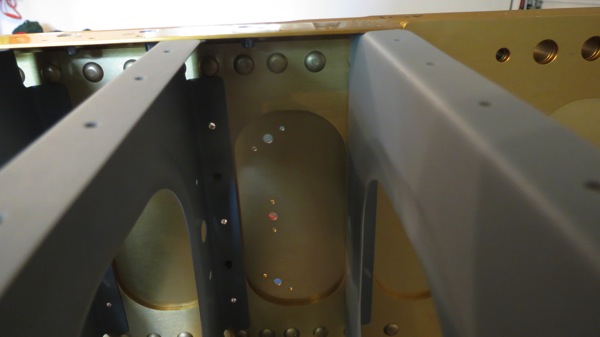 There seems to be no reason why I can’t go ahead and install these nutplates now, while I can get the ribs out of the way and have good access back there. So I did it.

Actually, even with the ribs out of the way, it’s an interesting spot. The spar reinforcement plate doesn’t leave a lot of room to get a bucking bar in there. Squeezing is out of the question; the nutplates are too far away from an edge and the spar flange and forward reinforcement bars are too wide too. I ended up using my tungsten bucking bar here. Most everything went well, but on one rivet I let the bucking bar slip off, and the shop head ended up with a nice little step on it.

I considered leaving it in at first. Generally, a shop head like this is unacceptable, but for a nut plate, the rivet isn’t really taking any load; all it has to do is keep the nut plate from spinning. Once the bolt is installed, that will be the main load path. Still, I was bothered by the bad rivet, so I decided to drill it out. I got the head off OK, but realized I needed a second set of hands to back the nutplate while I punched out the rivet, lest I ruin the nutplate and then have to drill out the other rivet as well. And here Josie had just run out for a few errands. So I went back inside to take a break…which of course turned into the nap I’d sworn I wouldn’t take today.

Finally, I got back out later and had Josie help me punch out the rivet. It turned out it was a useless wait anyway; the nutplate was still bent and I still had to drill out the other rivet and replace it. Then it was back inside to call and talk to my parents before it got too late over in the Eastern time zone.

This is the nutplate I replaced. I still put an ugly shop head on the lower left rivet, smeared it a bit, but drilling it out will probably cause more damage than good, and as I mentioned before, it’s not as critical here to have perfect rivets. You can also get a better idea of how the spar reinforcement (the outer raised area) gets in the way. 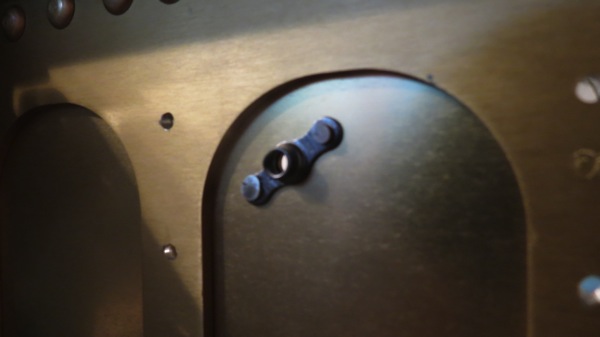 And things are just as fun on the forward side. Notice the spar reinforcement bar below these rivets, covered in blue tape to prevent marring. I could barely get the rivet gun with the flush set into the outermost rivets. 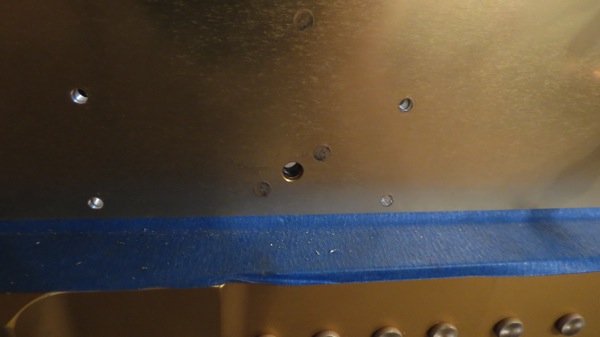 While I’m still annoyed by these short weekend work days, it’s still better than not working at all, I suppose…