Finally, a weekend workday worthy of the name. Yesterday I had the idea of focusing today on right wing prep, maybe to the point of even getting the ribs primed. However, after thinking about that some more and getting some input from Josie (who is right way too often for her own good), I decided a better course of action would be to start working on the second wing stand and then kind of go from there.

We took the dogs for a walk at the arboretum in the morning, grabbed lunch on the way home, and then I headed out in the garage. I figured that assembling the stand would be pretty straightforward, especially since I had all the lumber already precut and ready to go. And it did start out that way, but before long, I ran into an issue. I’d put one end piece on the two lengthwise planks and was about to attach the other end piece, but something wasn’t right; it seemed to not want to line up right. I busted out my handy tape measure and discovered that somehow, I’d cut one of the long pieces 1/4” shorter than the other one. I couldn’t afford to shorten the other piece to match, so instead I cut a 1/4” section of 2×6 and stuffed that little shim on the end of the short piece. No problem, just looks a little ghetto.

After getting everything together, including the feet but not the platforms, I had another problem. I took pains to get the straightest 2x6s I could find for these stands, but I still had some serious twist. I don’t know if the lumber warped while sitting in the garage or what, but the end result was that with one end flat on the floor, the other end piece had one end almost a full inch off the ground: (don’t mind the “top” marking, that’s from that plank’s former life as part of my moving fixture for the h-stab) 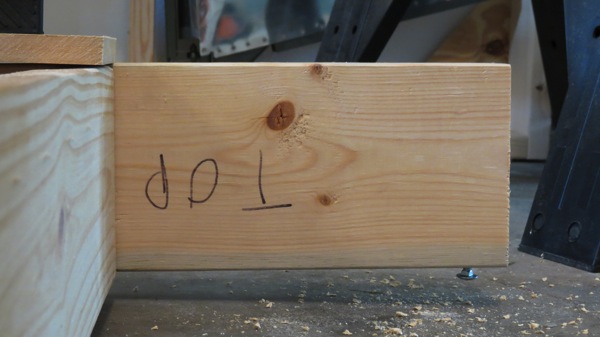 So this was an interesting problem. I’m using adjustable feet to allow for leveling the stand bases, so I could make this sit on the floor in a stable position, but then I’d have one of the wing uprights angled in a very nasty way. So I ended up putting a shim under the platform that the upright actually bolts to. When I was designing these bases, I almost skipped the MDF platforms because they seemed kind of like overkill, but now I think it was a good decision. Without the platform, I would have had to shim the upright itself, maybe with a bunch of washers or something, and I think it would have been a real pain. Anyway, here’s the shimmed platform. I’m using the level to get the shim thickness right; my procedure was to level the good end of the base, then set the feet on the twisted end, and finally tinker with shims until the platform was reasonably level. It doesn’t have to be 100% perfect, as the arms on the stands are adjustable to get perfect level up there: 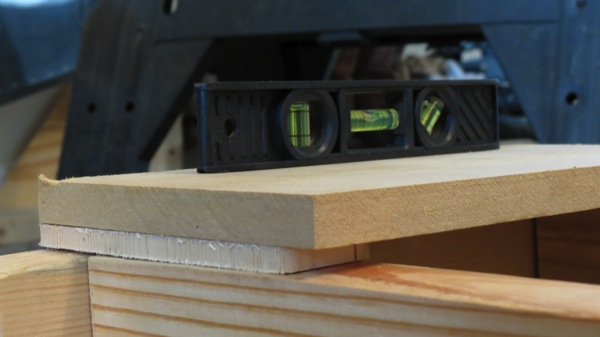 So after a bunch more drilling and screwing and so forth, the second stand was complete. Now the fun part was figuring out where I was going to put these. I wanted to give them more-or-less permanent homes; I’m not convinced this garage floor is perfectly straight, so I figured that the stands would need to be readjusted if they ever moved. Picking “official” spots for them means I can level the stands there, move them out of the way if needed, and then put them back and be reasonably sure that they’re straight again. I’m not anticipating actually moving these things, but I figure I might as well be prepared for that anyway.

This ended up turning into a minor garage reorg; among other issues, I’d accidentally blocked the attic door previously, so I wanted to clear up that area anyway. With some experimentation, I ended up with the wing stands basically taking up most of one half of the garage, with the other half roomy enough to have my work bench out and accessible from both sides, and the second work bench in reserve against the garage door. I made sure I could work comfortably in between the stands, got them nice and straight, and used blue painter’s tape to mark their corners on the floor: 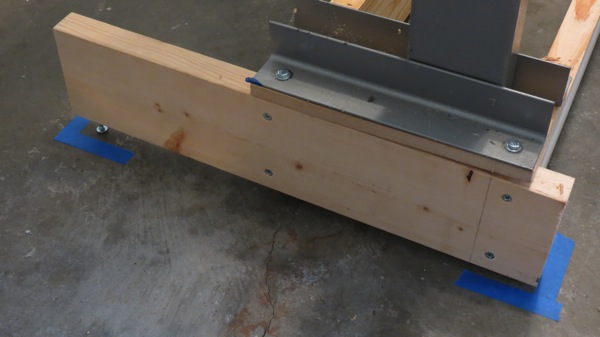 I went ahead and put the entire left wing skeleton on its stand, and the right main spar on the other stand, and began the tedious task of getting the stands straight and level. I’m possibly being overcautious here, but better safe than sorry. With the older non-prepunched kits, getting a straight wing jig was absolutely vital to avoid building a wing with some twist in it, but the newer prepunched kits are pretty difficult to mess up. But that’s no reason to be careless. I’ll probably be double-checking all this stuff once I put the fully riveted skeletons on the stands for good, but at that point it should just require fine-tuning at best.

Here’s an exciting picture of a level sitting across the inboard end of a spar: 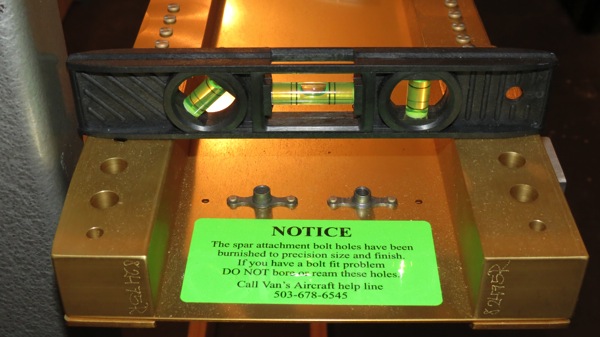 And there we have it, a garage set up for some serious wing construction: 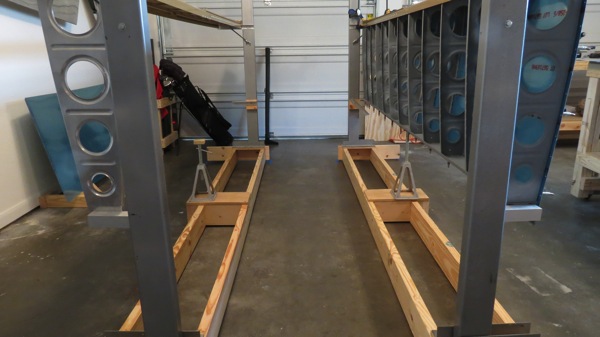 This week I’ll focus on getting the right wing ribs and such ready to be cleaned and primed this weekend. Since I have a three-day weekend, I should have some extra time to be productive. I figure I should be able to get my longeron yoke in this week so I can finish riveting the left wing skeleton and be ready for the right one.