I started out my day by heading up to Weiser Air Park for the monthly lunch the local RV builders do. I hadn’t been to one in a few months due to other commitments, so it was nice to go hang out, talk about building, and most importantly drool other everyone else’s airplanes. One the guys who flew in today was in this sweet-looking RV-8. My practical side is a little unsure about painting an airplane in anything vaguely low-visibility, but I have to admit that this is a cool paint job.

After watching everyone depart – a process that culminated with a low high-speed pass from an RV-10 driver – I headed home, feeling motivated to get to work. That got a little sidetracked when I decided to lie down for a few minutes, whereupon staying up late Friday night caught up with me.

Finally, rejuvenated, I went out to the garage. Mindful of how long it’d been since I shot rivets, I did some practice runs with a few scrap pieces before going to work on the spar itself. I was still kind of nervous for the first few rivets, but before long I was getting into a good groove. And that, of course, is when things got interesting. I was on the inboard end of the wing, where the spar reinforcement bars make the top and bottom rivets slightly more difficult to see the shop head side. I had shot four of the five rivets on this rib just fine, and the last one was the topmost. I inserted the rivet, got the gun and bucking bar in place, squeezed the trigger for a bit, then bent down to check my progress.

I was shocked to see a tiny shop head. Wait, did I not get the rivet in all the way? I checked the other side – nope, the manufactured head is flush against the rib flange. What happened? 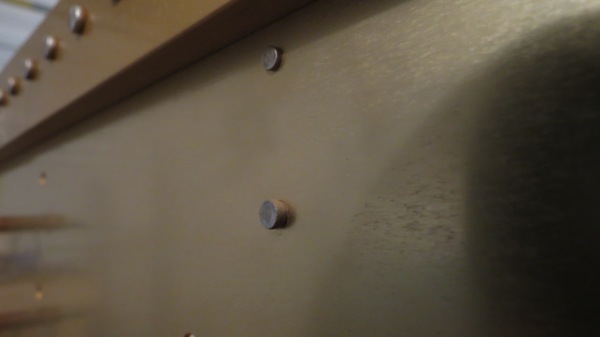 I was confused by this for longer than I’d like to admit, until the obvious occurred to me – somehow a shorter rivet must have gotten mixed in with the ones I was using. If I’d been in any other hole, I would have seen this before shooting, but it just so happened to be the hole where my vision was obstructed.

Well, time to get drilling. This turned out to be a pain; I got the manufactured head popped off pretty easily, and started trying to punch the rest of the rivet out, but that thing was in the hole quite securely. My level of violence wight he hammer continued to rise before I realized that this was exactly the mindset that caused things to get damaged. It was getting on towards dinner time anyway, so I left things alone, fired up the grill, and cooked off some brats. We ended up watching a movie with dinner, after which I went out and, with my mind calmed down some, got the rivet punched out (though not after drilling all the way through it and using pliers to help encourage it). The hole seemed good but maybe slightly oversized; not enough to need to drill out to the next larger size, but enough that I was worried about the shop head clinching (this tends to happen when there’s extra play in the hole).

Fortunately, there’s a well-known solution to this. I’d never tried it, but you can take a rivet squeezer and give the rivet a tiny bit of squeeze, just enough to swell the shaft and snug things up. It worked like a charm; I shot the rivet and then called it a night.

Tomorrow will be more fun. All the ribs I did today had their flanges facing left, which made it easy for me to shoot and buck. Some of the ribs, though, face the other direction. The only way I’d be able to shoot and buck those would be to switch hands and shoot left-handed. I’m not too confident with that ability, so I’ll probably get Josie tome come out and help.