Lesson of the day: it takes a lot longer to do, well, everything with the wings. There are more of everything and each piece is bigger…

First, I’ll rewind a bit. Saturday wasn’t entirely unproductive, but mostly so. We had some errands to run in the morning, and when we got home I felt bad enough that I went and laid in bed for several hours. My back has been bothering me off and on for a week or so, and it got pretty bad yesterday (this has been a sporadic occurrence ever since I messed it up slinging boxes for UPS when I was 18).

By the time I felt ok to get up and walk around some more, it had gotten late, which did have the positive effect of the temperature dropping. I decided that my goal for the night would be to cut the new pieces of wood I needed to extend the jack platforms on the wing stands. I had enough 2×6 left over that I ended up cutting four sections, which I’ll sandwich together and attach to the long support to give me an extra 3” of jack pad length. I also cut some of my leftover 3/4” MDF scraps into the new platforms. I did not, however, actually assemble anything.

Today’s goal was to get the wing ribs primed. I slept in again and got to work just before noon. The first order of business was to make a hole deburring pass on each rib. This included the holes I’d match-drilled to the spars previously, as well as the tooling holes in the rib face. I’d left those alone previously because I thought I’d be running conduit through them. Once that was done, I scraped the part ID sticker off each rib, then took them outside for a good cleaning. This was where I got to really enjoy the Texas heat for the first time. It probably took over an hour to scrub down all the ribs.

Prior to the cleaning, I’d set up a piece of rope across the backyard to hang the ribs from. I then found it necessary to anchor the bottoms of the ribs as well so they wouldn’t swing in the wind too much. Some small-gauge wire I had lying around worked well for this. Here are all the ribs hung up and ready to be sprayed: 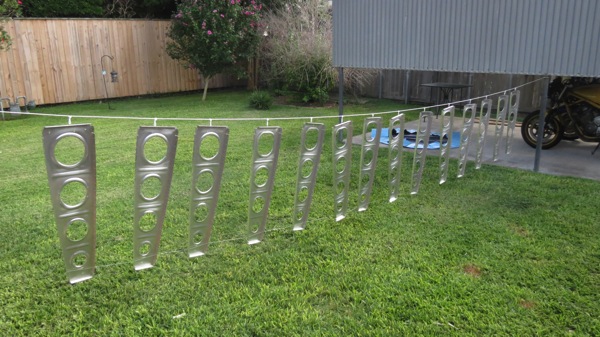 Next I got a less in the scaling up that happens when moving to the wings from the empennage. I had two full cans of NAPA 7220 on hand, which I figured would be enough. WRONG. There were still some bare spots when I emptied the second can. Fortunately I still had some SEM leftover, so I used that to finish the job. Both primers are gray, but the SEM is slightly lighter, so my ribs have a sort of amusing mottled look to them.

Here are the finished ribs: 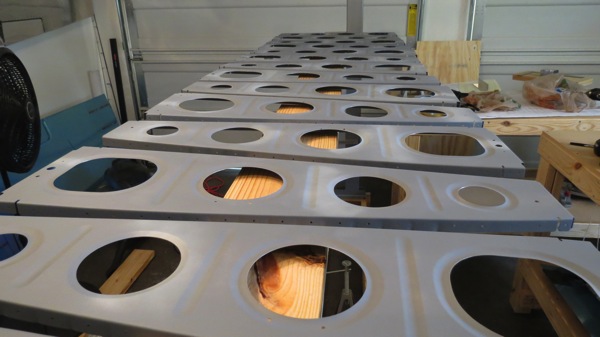 Tomorrow I’ll probably go ahead and fix the jack pad on the assembled wing stand, cleco the left skeleton together, and hang it on the stands for the time being. I probably won’t be able to get to riveting tomorrow. I had originally planned to assemble the other wing stand first, but now I’m thinking I’ll wait until I need it. That means I need to clean up a bunch of stuff I left lying around in anticipation of assembling that thing…so much stuff that I don’t even have workbench space available, which I’ll need to rivet the skeleton.