Finally, a good productive day. Haven’t had one of these in some time. I started the day off with a trip to Home Depot to pick up my conduit materials. I was sort of hoping for some Class 200 PVC, but I ended up with PEX instead. The Class 200 PVC is very thin-wall, generally used for vertical runs from water heater pressure relief valves. It’s only used vertically since the walls are so thin, and it can’t support much weight. But that also makes it far lighter than normal Schedule 40 PVC, and it would be perfectly suitable for my conduit run. Unfortunately, Home Depot didn’t have any other than some short prefab lengths in the water heater section. I need a 10’ run, and I don’t much feel like going to the trouble of buying several short pieces and joining them together. So I went with 3/4” PEX instead. They even had nice 10’ precut sections, exactly what I need. I also picked up some hangers, which I’ll use to secure the PEX to the ribs with pull rivets.

Back at home, I wanted to do a rough run of the PEX through the assembled skeleton I had just to double-check everything. I even went so far as to mock up both the aileron pushrods with the rod ends and put them in place, so I could see what everything would look like. Here you can see the bellcrank assembly, the small pushrod that runs from the bellcrank to the aileron, and the long pushrod that runs from the bellcrank to the control stick. Below the short pushrod is the PEX pipe, sitting in one of the hangers and temporarily clamped in place. 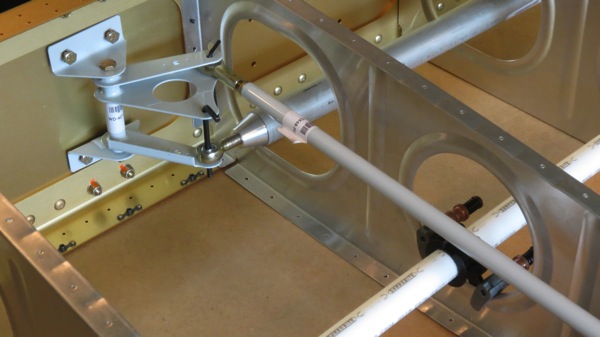 A closer detail of where the PEX and the pushrod cross paths. There’s a couple inches clearance in here, and the worst case I can envision if the PEX were to come loose of the hangers would be for it to rub against the pushrod. I can’t see any way it could cause a control blockage issue. 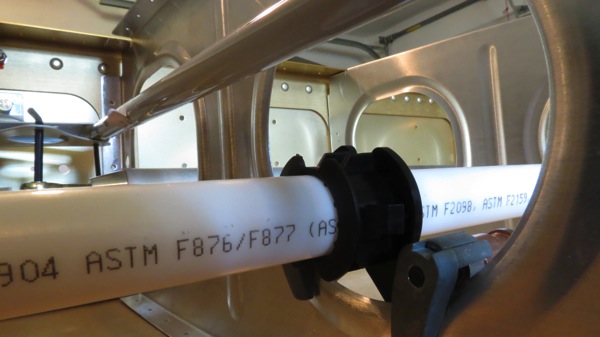 On another note related to plumbing, I’ve decided to stick with just this one conduit run. The consensus I’m getting from reading VAF experiences is that I shouldn’t have any issue running coax for the NAV antenna in with everything else. The main source of interference people seem to report is from HID landing lights, and I suspect that by the time I finish this, LEDs will have dropped in price enough that they’ll be the best choice.

Now that I’d satisfied myself with the plumbing, I decided that since I already had the whole skeleton clecoed together on the bench, I might as well go ahead and match-drill the spars to the ribs. I made a somewhat unpleasant discovery in the midst of this though – it seems that the garage outlet circuit isn’t up to powering both the compressor and air conditioner. Which is kind of odd – I’d thought this might be an issue before, so I made a point one night of running both at the same time, and I had no issues. No such luck today though…I’d gotten through a few holes when the compressor kicked on briefly, followed by darkness and a deep silence caused by my music stopping as well. Well, time to go reset the breaker. Fortunately, the garage seems to maintain temperature fairly well for short periods while the A/C is off. I guess I’ll just have to be sure I turn it off before I do a bunch of drilling.

With the ribs match-drilled, I now need to keep track of each rib’s position on the spar. Most likely I could switch them around with no issues, but it’s good practice to be sure. On the tail, I used a simple system of punch marks for this, but here I have far more ribs (14 per side to be precise). I went full nerd on this topic and devised a binary marking system. Doing it this way means that each rib only needs four punch marks; I just number them from inboard to outboard. Hopefully these marks don’t disappear under the primer… 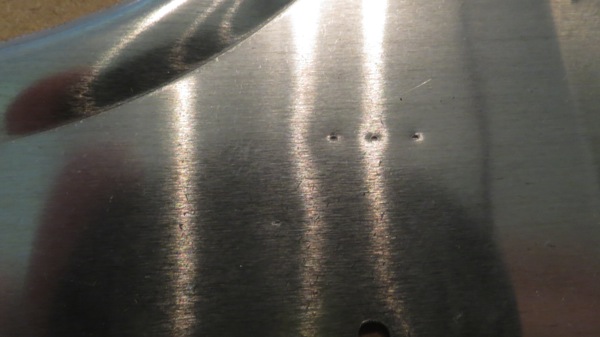 Finally, after taking a break inside for some dinner, I set about finishing the evening by doing my last row of tank attach countersinks. Not really difficult work, though I was cognizant of how long it had been since I did this last. I got back in the groove pretty quickly, but still, I’m way more confident doing stuff like this when I’m in practice. I’d better keep up the work! 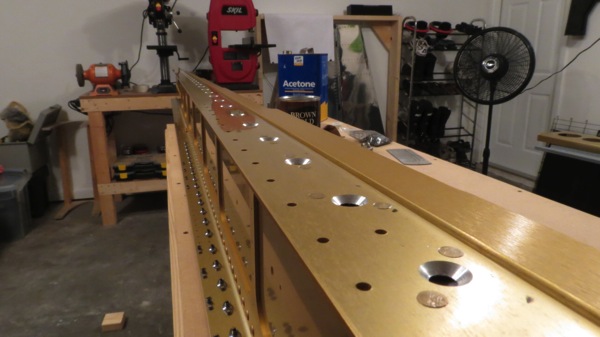 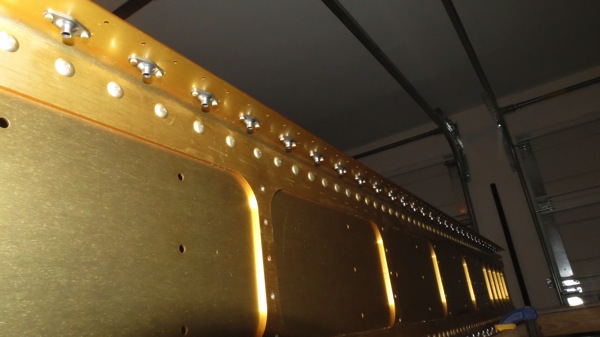 Tomorrow I think I’ll make another Home Depot run for some 1/4” plywood. I want to make templates so I can drill the rivet holes for the conduit hangers. I also need to get another pack of five hangers; I forgot to count the ribs before I went this morning, so I guesses at the number of ribs and came out a little low. If I can get those holes drilled, I can make a final debarring pass on the ribs and start thinking about priming them and riveting the skeletons together! Which also means I need to start thinking about building my wing stands…