Not really so much of a work day today, more research and head-scratching. I spent some time searching around for how other builders had done their wing plumbing, then went out to the garage to try and visualize things a little better. The big concern here is the control system for the ailerons; obviously I can’t have the plumbing interfere with flight controls.

The “standard” Van’s instruction calls for running black ribbed conduit for the electrical stuff, and using grommets through existing tooling holes for the pitot lines. However, this setup has some downsides in my opinion.

Considering all these things, I was leaning towards skipping the conduit and instead running something like 3/4” PVC or PEX through the existing lightening holes. Several builders have done this, and it seems simpler than drilling holes to run conduit through. But this also puts the conduit further into the wing interior, which goes back to the “don’t interfere with flight controls” issue.

To give myself peace of mind, I decided to mock up the aileron control system in the left wing. I already had the main spar sitting on the bench with the ribs clecoed on, so I got out the rear spar and clecoed that in place as well. Next, I loosely put the aileron bell crank in place. This piece converts the side-to-side movement of the main aileron pushrod (which attaches to the control stick in the cockpit) to forward-backward movement of the smaller pushrod that directly actuates the aileron. The smaller pushrod was my main concern, so after putting the bell crank in place, I laid the rod in place using the bell crank and the rear spar passthrough holes as references.

This confirmed what I pretty much knew anyway: The small pushrod sits towards the top of the wing, and leaves plenty of room to run 3/4” tubing through the second lightening hole at its lowest point. I’ll probably go ahead and get the tubing I’m going to use tomorrow or this weekend just to make really really really sure it’s OK. 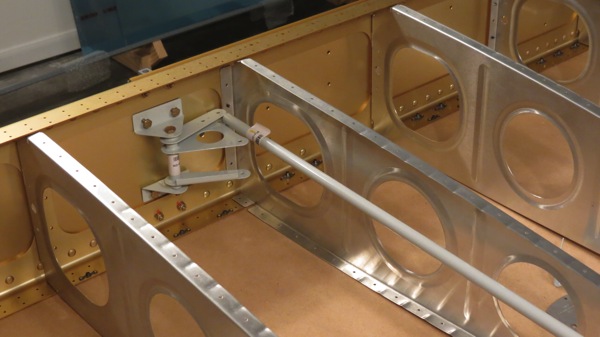 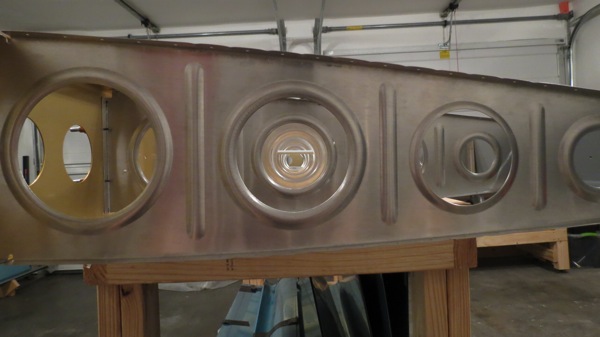 The only thing I haven’t really accounted for is possibly wanting a second, isolated wiring run. I’m debating whether I’ll want to put in a wingtip VOR antenna at all. I intend to have this plane be IFR certified, and while it doesn’t seem that a VOR antenna is required, it might be prudent to have one as a backup to GPS. That, in turn, raises the question of possible noise from the electrical wiring. I’ll need to keep researching to determine if this will be a problem. For the time being, though, I think the single conduit run will probably be just fine for everything.