Well, not so much of a highly productive day today. I gave in to the urge to sleep in and had some other things to do around the house. But I still found time to get all those holes drilled for the conduit mounts.

The first order of business was to create some kind of template so I could locate the mount holes consistently. The main concern I had here was figuring out a way to reliably locate the template relative to the lightening hole. After some thinking, I decided that the hole itself was the best reference. The circumference of the hole has a slight channel pressed into it, presumably for greater rigidity. I decided to make my template a two-part affair; first there would be a piece of 1/4” ply cut to butt up against the edge of the channel, and on top of that would be a piece of 1×4 I had lying around, which would have the actual holes drilled in it.

The first step was to trace the edge of the channel relative to the rib flange. Yes, that’s a piece of a McDonald’s bag. Go ahead, judge me. 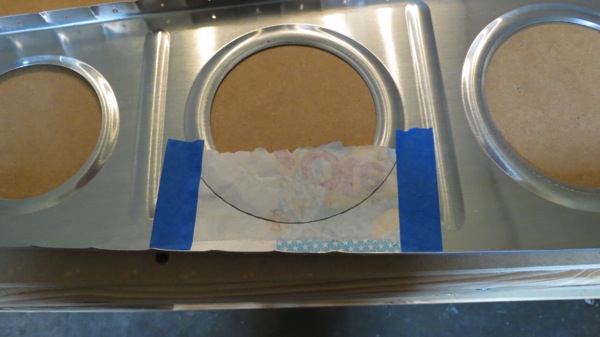 Next I cut the paper in that line and transferred the shape into a piece of ply: 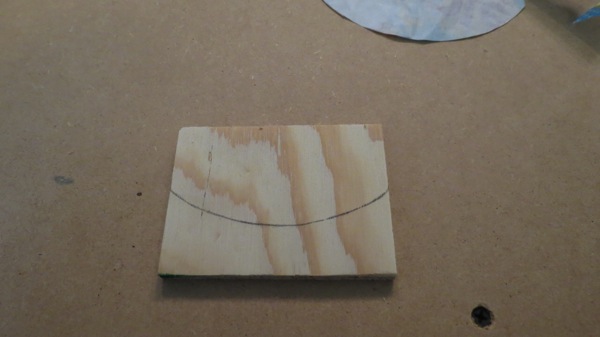 Then I cut the curve on the ply in the bandsaw, ensured everything lined up, and glued the ply piece onto the piece of 1×4. I didn’t get any pictures of this.

At this point, I had some dead time while I waited for the wood glue to set, so I decided to review all the instructions for the wing kit. I was particularly interested in seeing when the wing skins would get match drilled and the ribs dimpled. With the empennage, everything pretty much went together at once, so by the time I got around to priming a rib, it was already fully match drilled and dimpled. Not so with the wings; the skeleton goes together and then the skins are match drilled with the skeletons hanging in the stands. Ergo I’mm be match drilling and dimpling ribs that are already primed. Not that this is a problem really; I even did some tests with dimpling primed pieces a while back and the rattle can primer held up just fine.

Mostly, though, I just wanted to kind of get the big picture in my mind. It looks like once the skeletons get hung, the skins are match drilled, and then work shifts to the leading edge section and the tanks. I’m sure the tanks will be quite a bit of work. Only after those go on for good is it time to rivet some wing skins. then it’s time for the ailerons and flaps!

Anyway, fast-forward a couple hours (and maybe a nap…), and the template was dry. I used one of the hangers to locate and drill the two holes: 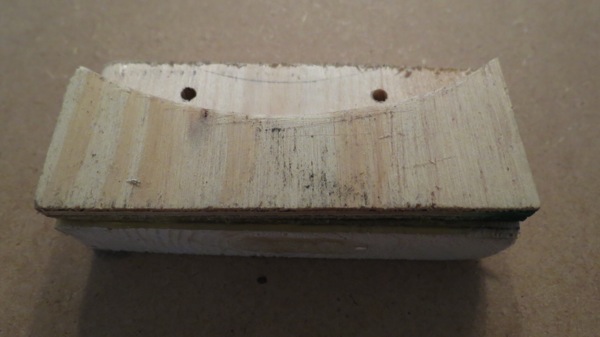 I ended making a few modifications after this; the 1/4” ply is actually a good bit thicker than the lightening hole channel, and I wanted the top part of the block to fit better. So I shaved off some of the ply in the bandsaw and then went to town with the bench grinder. I struggled a bit trying to figure out a way to hold the template in place while I drilled the holes, and then a solution became obvious: the template sat against the rib flange, which had holes for the wing skin. All I had to do was locate it properly, clamp it in place, and drill 3/32” holes through the flange, and then I could just cleco the template in place for drilling. Very nice. 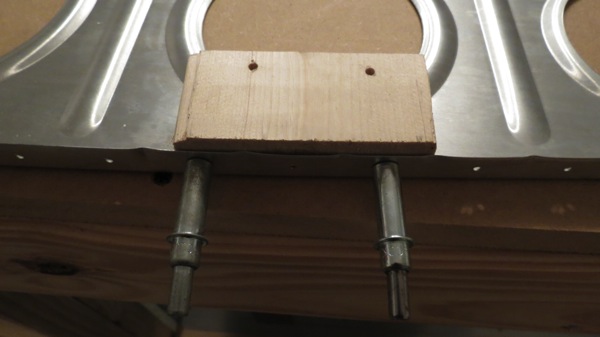 After checking everything about 20 times, I finally took a deep breath and made some holes. It worked out quite nicely: 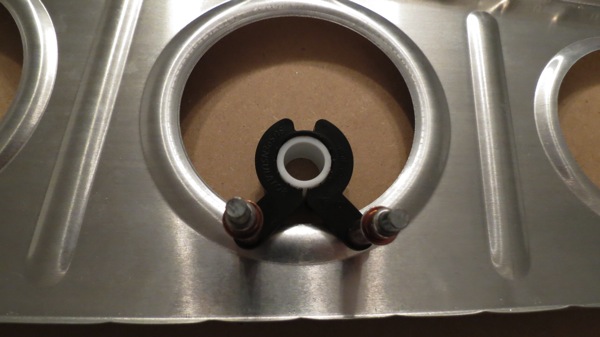 I think I’ll probably get some washers to put between the pull rivets and the hanger itself, since it’s somewhat soft plastic. Can’t hurt to distribute the clamping force of the rivets a bit.

After this, I repeated this procedure 27 more times. Which was actually four more than I needed; at the inboard end of the wing, there are four ribs spaced closely together to support the wing walk, where people will be stepping as they get in and out of the plane. There’s no need to put a hanger on each one of these, so I was going to skip the two “inner” wing walk ribs, but I kind of got on a roll with the drilling and drilled all of the ribs.

Anyway, that’s it for today. Next steps will be to do a final deburring of the left wing ribs, then prep and prime them. I’m going to wait on the right wing ribs until I have the left ribs primed and at least clecoed back to the skeleton. The reason for this is that while I like my binary marking system, it has no provision for denoting left/right wing ribs. So I figure I’ll just keep the batches separate for now.

Thing is, cleaning and priming all these ribs is going to be an all-weekend project for sure. I’ll probably just wait until next Saturday to do that. This week after work, I can finch the deburring, but that’ll be trivial. Maybe I’ll work ahead a bit and see about building the aileron pushrods or the bellcrank assemblies or something like that. I feel like I’m getting some momentum going here, so I want to keep rolling on something and not get in the habit of not working on things.