I’m going to start with some real honesty: I’m not at all pleased with how I’m doing on this project, specifically my productivity. (or lack thereof) Sure, I did get back out in the garage to work on some ribs a few weeks ago, but then the next weekend I was out of town. But hey, then it was Labor Day! A three-day weekend, surely I can get some stuff done now! Yeah, didn’t happen. I did go out to the garage that weekend with every intention of doing some spar countersinking, anything. But when I went out there, I was confronted with a huge mess. (of my own making, I should point out) I’d been working on another project out there, and when I was done, I just left all the tools out. The workbench was covered with tools, scrap material, and junk in general. Suddenly the prospect of having to clean all that up before I could even start being productive was just overwhelming.

One of the things I did think about while I was sitting out in the garage being completely unproductive was that I really needed a place to hang my plans. I’m kind of ashamed to say it, but throughout the entire empennage and the wings so far, my methodology for reading plan when needed was to do seriously ghetto stuff like drape them over a nearby motorcycle or a sawhorse. Yeah, it worked, but didn’t really lend itself to efficiency. Plus, I had to move the plans if I wanted to ride the motorcycle. Basically the plans were just clutter to be moved around when I wasn’t actually looking at them. So I did spend some time thinking about what to do about this issue, but I never did arrive at a good conclusion, and finally I threw in the towel and didn’t go out in the garage the rest of the weekend. *sigh*

However, I kept thinking about dealing with the plans over the next few days. This was at least a small improvement; something project-related was sitting in my thoughts persistently. Eventually I settled on constructing a sort of vertical frame from which I could hang plans I was working with and also store plans that weren’t really in use. As a plus, I’d add casters so I could roll the plans up close to wherever I was working.

To that end, I stopped at Lowe’s on the way home for some supplies. Most notably, I picked up a miter saw, partially because I was going to need to make some precise 45° cuts for braces, and partially because I didn’t want to deal with the circular saw again. Besides, nothing inspires a dude to go work in the garage more than a shiny new tool. Once I got home and changed, I went right to work and by about 10:30, I had my nice new rolling plans stand. Not only is it going to be useful in general, but I feel like I’ve accomplished something for a change. It’s not direct work on the plane, but it’s improving the workspace and hopefully helping me to become better organized.

Anyway, here are some photos of the stand coming together. First, 2x4s cut for the main structural parts: 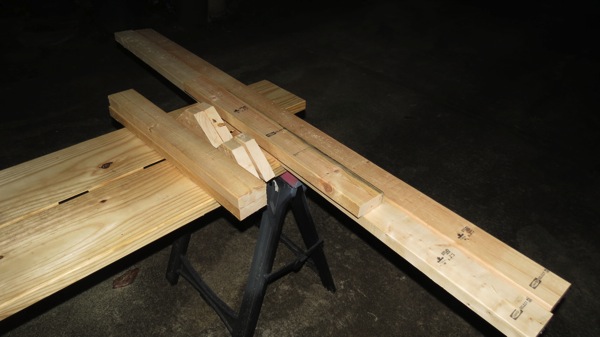 Assembling one of the two uprights, with corner brace in place: (in retrospect, plywood gussets would have been a lot easier to do here) 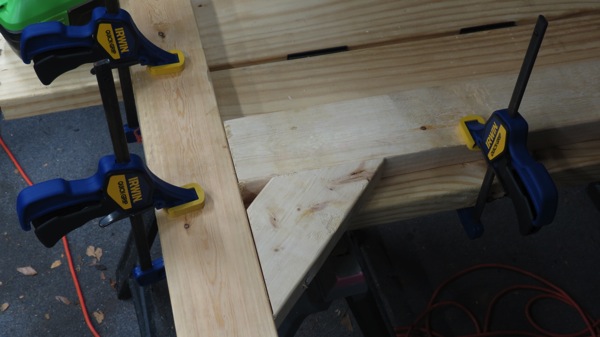 The main frame together. Just need to add the small horizontal pieces from which the plans will hang: 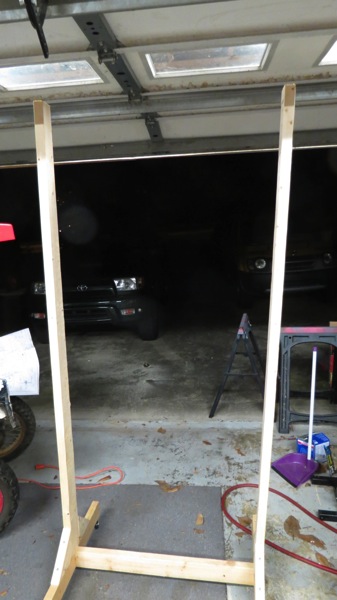 Horizontals pieces in place. I finished things off with some eye hooks, from which I can hang binder clips that hold plan sheets in place: 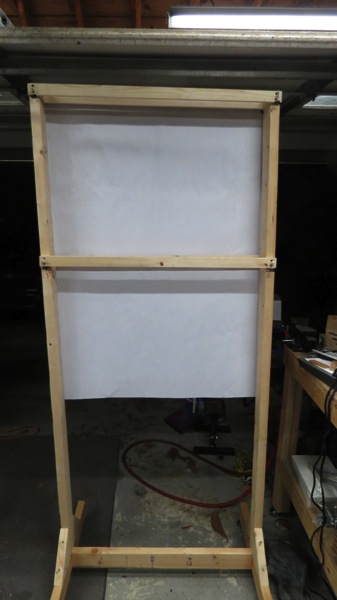 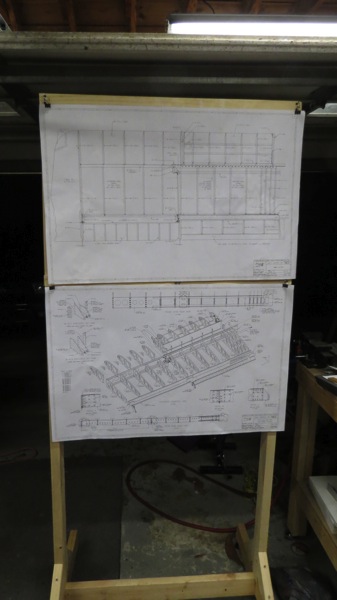 With this setup, I can have four plan sheets viewable at any time. (two on each side) I didn’t get photos of this, but I also added two more horizontal pieces down low, over which I can drape plans that aren’t in active use. (for example, the empennage plans) The only downside is that this thing is really tall. I did that on purpose – I’m a tall guy and that lets me take advantage of vertical space like this – but the thing only fits under the open garage door by about two inches! I suppose if it gets to be a pain, I can always shorten it. We shall see.