The project is still alive

Wow, it’s really been two months since I did any appreciable work on the RV.  It started with some craziness at work…we had a big pressing project, which worked out to some long hours and a fair amount of stress.  But even that really calmed down for the most part about a month ago, but I think I was still having some residual stress issues.  I tried to go out in the garage and deburr some of the right tank ribs one Saturday, but it just seemed like horrific drudgery that I didn’t want to have anything to do with, so it didn’t take me long to find an excuse to go back inside.

I guess you could say that I was really in need of a vacation.  Luckily, there’s Oshkosh!  This was the second year for Josie and I; we drove up last year, and I pretty quickly concluded that the next trip should be flown instead, so that’s what we did.  We rented my favorite Archer from Skybound Aviation and headed up for a full eight or so days camping up in the North 40.  I think it was just what I needed; I came back with a clearer head and a much better attitude towards life in general.

So anyway, today I went out in the garage and went to work on those tank ribs again.  This time, there was none of that feeling of drudgery.  Well, it’s still tedious work, but I didn’t have the same feeling of complete detachment the whole time.  Today, I got all those right tank ribs deburred…that completes all the right wing ribs. (now I just get to repeat this exercise again…)

After that, I did one of what I’m going to start calling Sanity Assemblies.  These are temporary assemblies of parts that serve no purpose other than to let me look at and touch something that looks like a real airplane part.  For today, I used the leading edge cradle that Daniel Schoning gave to me and clecoed the right tank together. 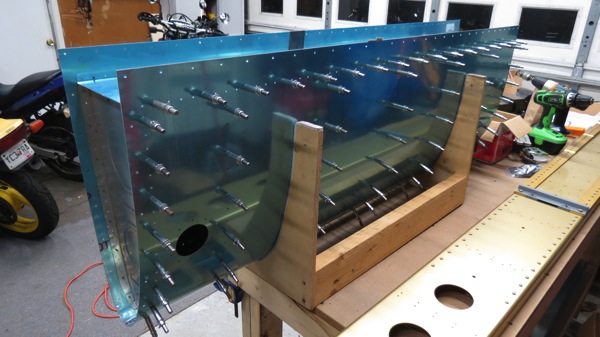 That’s all for today.  I still need to countersink the second main spar and get those countersunk holes primed…maybe that can happen next weekend.  Plus there’s the left wing ribs to deburr as well…