Finally, a good productive weekend day in the garage.  Things started out kind of rocky…when I started working on that first tank rib, I found myself right back in I-really-don’t-want-to-do-this-tedious-work land.  But eventually I just put my head down and kept at it, and before long I was rolling through ribs at a pretty good clip.  It seems there’s a pretty strong mental thing going on here.  It kind of reminds me of when I actually used to run.  The first five minutes or so, all I could think about was how much I didn’t like running, how I wanted to stop, blah blah blah.  In those five minutes, decided to stop was an easy decision to make. (fortunately, on a lot of those runs there was an, um, very encouraging Marine Gunnery Sergeant on my tail)  But once I got past that point, it was pretty easy going.  I got past the discomfort and just cruised.

Anyway, I guess the ribs are kind of like that.  I just have to plow through the initial unpleasantness, and once that’s done it’s almost a cakewalk.

All told, I got through the tank ribs for both the right and left wings today.  That just leaves me with the left wing leading edge and main ribs.  I expect to get those knocked out tomorrow.  Josie also came out and worked on deburring the ribs I already straightened.  I hit all the easy rib edges a while back with the bench grinder and die grinder, but there are still lots of nooks and crannied on these things that need attention.  This is more tedious stuff, but Josie says she actually finds the deburring to be kind of relaxing.  I’m more than willing to let her take care of that stuff.

My minor reward for being productive today was clecoing the right tank ribs to the tank baffle, giving a little preview of what the inner tank structure will look like. 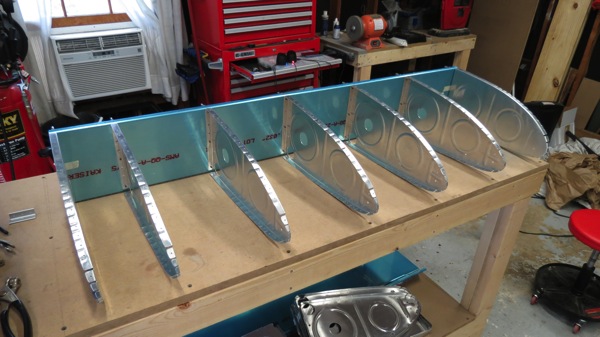