Luckily, I should only have to make up one more title like that.  I got through all the left leading edge ribs and four of the main ribs tonight.  That just leaves ten main ribs to straighten, and the mains actually go pretty quickly as compared to the leading edge/tank ribs.  It was a little brisk out on the garage, so I worked inside at the coffee table with Shawshank Redemption playing in the background.  I even recruited Josie to snap one of those “prove you really did build this thing” photos. 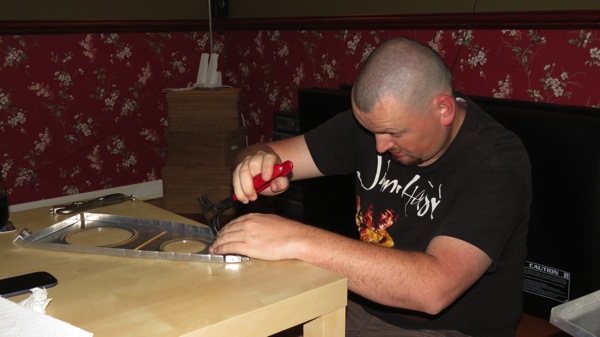 That’s it for the work summary, though I feel compelled to share a brief humorous tale regarding making assumptions.  I’m pretty sure I’ve mentioned here a few times the backordered parts from my wing kit, in particular the large number of tank attach nutplates, which represent a significant amount of work to be done on the main spars.  When I called Van’s back in April to check on my backordered parts, the impression I got was that they had my missing tank ribs and the nutplates for the stall warning kit, but not the tank attach nutplates; they went ahead and shipped what they had.

When that box arrived, I found the two tank ribs and a paper bundle.  I admired the ribs, and just stuck the bundle on a workbench somewhere.  Since I’m not planning on even using the stall warning kit (I want a real AoA system instead), I didn’t even give that bundle the time of day.  Since that time, I’ve lamented on several cccasions how I wished I could be taking care of those tank attach nutplates, blah blah blah…

Well, today I got a package from Van’s.  Finally, my prodigal nutplates!  I opened the package and found…ten nutplates.  I was expecting the 210 tank attach nutplates. I was quite confused.  A look at the inventory sheet revealed that these were, in fact, the stall warning nutplates.  Wait, then what’s in that bundle that’s been collecting dust for four weeks?

You probably guessed it.  It contained those 210 tank attach nutplates.  The stupid things have been gathering dust in the garage while I complained about not having them yet.