Had a nice turnaround from my last evening in the garage.  Maybe I was just in a more productive state of mind or something.  Maybe it had something to do with hanging out with the Falcon RV Squadron guys over the weekend, which afforded me the opportunity to try out the front seat of an RV-8…which in turn afforded me the opportunity to look out over the nose and imagine nothing but clear blue sky out there.

Anyway, I digress.  Last time I did on tank rib and three main wing ribs in about an hour and a half.  This time I finished the rest of the right wing ribs – eleven in all – in less time.  I celebrated this milestone by performing another one of those completely-unnecessary-yet-totally-giggle-inducing temporary assemblies.  I got out the appropriate inboard skins and clecoed together the inboard wing section. (minus the spars, of course) 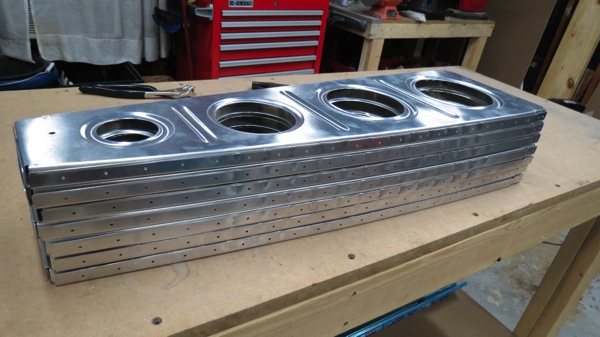 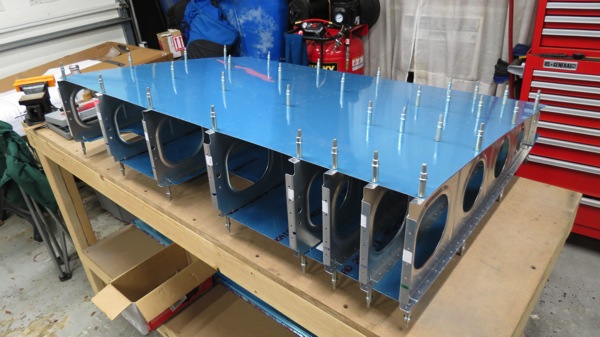 In addition to my motivational problems last time out, I think that there’s some technique making a difference here.  Fluting has an effect on the squareness of the rib flanges and vice-versa.  It seems that fluting tends to make the flanges bend outward a bit, which then has to be corrected, which in turn undoes a bit of the fluting, and so forth and so on.  I think previously I was maybe fluting too much, which caused the flanges to need extra tweaking, which caused the flutes to need tweaking…this time, I tried to start off fluting less than I thought I needed and creeping up on a good level of straightness, and I found that the flanges seemed to need less work to straighten up.

(or maybe I’m less of a perfectionist this time out, I dunno)