I’m coming down to the end of useful work on the tail.  With the completion of riveting the left elevator on Sunday, the next big task is to roll the leading edge of both elevators.  Since the left one was already down on the table (as opposed to the right one, which is hanging from the rafters), it was a logical candidate to get the rolling treatment first.

I’ve done this task before, on the rudder, so I wasn’t really expecting a lot of drama.  A lot of people stress over the leading edge roll, but I don’t recall the rudder being a huge problem, and my blog entry seems to confirm that.  I did actually have some issues tonight though.  I had a lot of trouble getting things rolled properly at the tip end; it seemed like I really needed a smaller-diameter pipe to get a tight enough bend there.  I ended up getting things as tight as I could manage with the pipe, and then doing a large amount of “massaging” by hand.  This “massaging,” for the record, is an operation fraught with peril.  Trying to bend the skins by hand introduces a lot of inconsistencies in the bend, and then it takes a lot more massaging to undo the problems caused by the previous bouts of massaging.

Here I am doing some “massaging”: 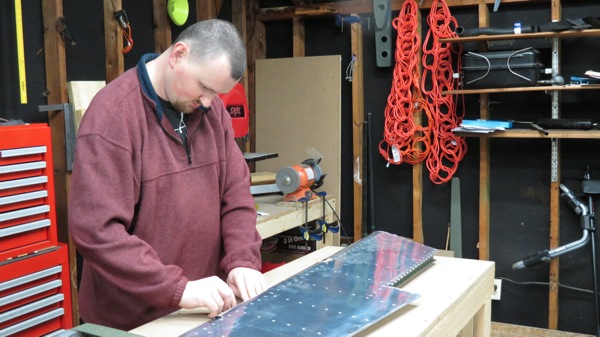 The section between the two rod end cutouts was, by far, the most problematic.  I must have clecoed and unclecoed that assembly six or seven times before I was satisfied enough to rivet the thing.  It’s still not perfect, and the skin bulges up a touch between the rivets, but not enough to be a problem.  Luckily, this seam will be completely hidden from view once the plane is together, so it’s not really  big cosmetic concern. 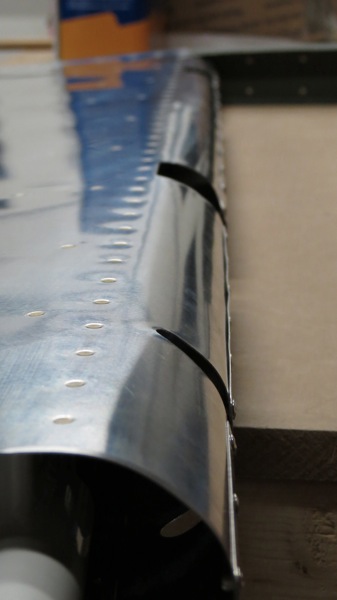 I had kind of hoped I might get both leading edges rolled tonight, but all that trial-and-error work ate the night up fast.  That’s OK, I’ve got plenty of time this weekend; once I get the other leading edge rolled, I can hang the elevators on the h-stab, get everything aligned properly, and drill the control horns for the center pivot mount.  I’m also considering some different storage ideas for the completed empennage; I’d have to take the elevators back off to hang it overhead again, which seems like a waste of work.  Who knows…there might end up being some new and interesting decorations in the house soon.