Whew.  This post actually covers work done on two days.  I got quite a bit done Sunday, but wasn’t able to get anything written up that night.  I managed to get a little time in this evening as well, and get the elevators hung. (Well, mostly.  Still have to do the center bearing.)

Sunday started off with rolling the leading edge of the right elevator.  Mindful of the problems I’d had with the left one, I picked up a smaller diameter section of pipe to use for doing the (smaller) outboard part of the roll.  I used nothing but a 3/4″ pipe on the rudder, but I found it impossible to get the elevator skins bent sufficiently with it, hence the large amount of massaging involved.  This time, I used the new 1/2″ pipe to roll the outboard two sections, and it came out far, far better.  Actually, I rolled the furthest outboard section a little too much, and had to pull it back out a bit to get everything lined up.  In the end, it all worked out, and without so much of the trial-and-error I had to do with the left elevator.

The next thing to do was to start working on getting the elevators hung, but first I needed a couple of tools.  First was an improvised rod-end bearing tool made using PVC pipe sections.  This makes it easy to install the rod ends that the elevators hinge on without marring them.  Second was a set of temporary pins to use when hanging the elevators.  These hinge pins eventually go together with bolts and nuts, but getting those in is a pain – the temporary pins are much easier to use until everything is finalized. 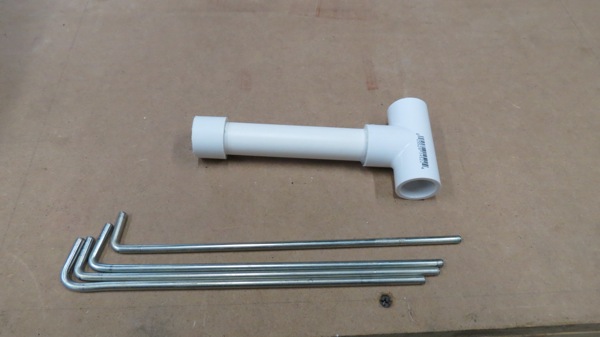 With those done, I got up on the ladder and pulled down the H-stab, which had been hanging in the rafters since…looks like August. (Really? Six months?!?! Wow.) With it on the bench, I was all set to hang an elevator!  Or so I thought…first thing I noticed was that my nifty hinge pins didn’t even fit in the holes!  I’d turned the tips of them down enough that they’d go into a rod-end, but not the hinges…but seeing as how the hinge brackets are powdercoated, it’s not surprising the holes are undersize.  Turns out the bolts that will eventually hold things together wouldn’t fit either.  So I got out the drill and reamed them out to the proper size such that the bolts would fit securely.  Still, my pins wouldn’t fit, so I ended up having to redo them to get the tips small enough to slide in easily.

Josie got a photo of me test-fitting a pin after turning the tip down for about the third time: 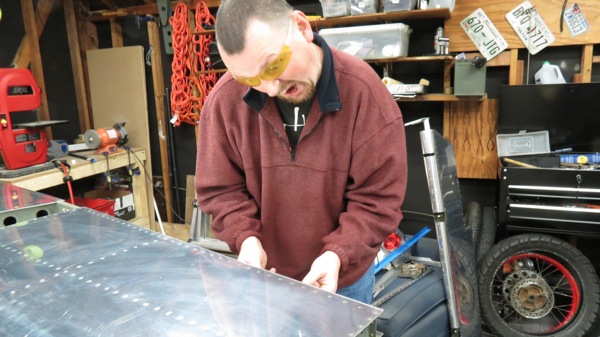 Finally, they fit!  And soon enough, I had the left elevator sitting in place, held by those lovely homemade pins.  Thing was, it couldn’t move…I neglected to get a picture of this, but the H-stab skins actually overlapped the elevator counterweight skins by a bit; these would need to be trimmed eventually.  The next step, according to the instructions, is to drill the hole in the control horn to match the center bearing.  But here I had a dilemma…the elevator is supposed to be clamped in place in trail before drilling this.  The overlapping H-stab skins do a good job of this, and I’d seen folks on VAF recommend letting them hold the elevators in place for the control horn drilling operation.

I, however, have an issue with this approach.  Until those H-stab skins are trimmed, you have no way of moving the elevators and ensuring that they have the correct amount of travel and don’t bind or rub or anything.  I wasn’t comfortable just hoping that they’d be OK…so even though it sort of meant more work, I trimmed the H-stab skins first.  To do this, I marked a point where the counterweight skin ended.  Then, after removing the elevator, I figured out the proper place to drill a #12 hole where the corner of the trim needed to be.  Corners like this need to be radiused, so drilling a hole to start with is a good way to take care of that problem.  Then I used a cutoff wheel in the Dremel to make the rough cuts, cleaned the cuts up with a cutting bit in the Dremel, followed with a file to smooth everything out, and finally deburred all the edges.  I was a little nervous about cutting the skin, but everything went great. 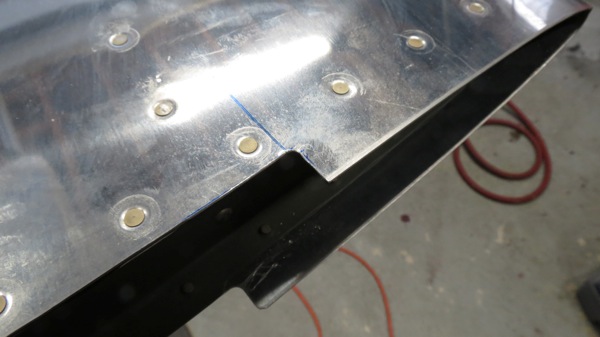 Of course, I had to repeat that task on the top of that end of the stab. (It’s upside-down in the photo, so the first trim I did was on the bottom)  Then I had to hang ghe right elevator, mark that skin, and trim those two corners as well.

The bottom of the H-stab spar also needs to be trimmed to allow clearance for the elevator control horns.  I marked the edges of the horns while each elevator was mounted, and after finishing the skin trims, this was the next task.  Cutting this made me very nervous.  There is a very serious-sounding warning about not taking any material off the spar reinforcement bars.  Oh, and the center bearing brackets are in there as well.  So there’s plenty of stuff available to foul up if something goes wrong.

I used the same basic technique as with the skin trims: drill #12 holes for the corner radii, then use the Dremel to make the initial cuts and clean them up.  I decided to be pretty conservative about the spar flange trim, to make absolutely sure I didn’t hit the reinforcement with the drill bit.  Then I was very careful with the cutoff wheel, especially while I was working near the bearing bracket.  I still managed to take a bit of powdercoat off the brackets though…must have just barely rubbed them.  There doesn’t seem to be any actual metal removed, so I’ll just need to touch these areas up with a bit of primer. 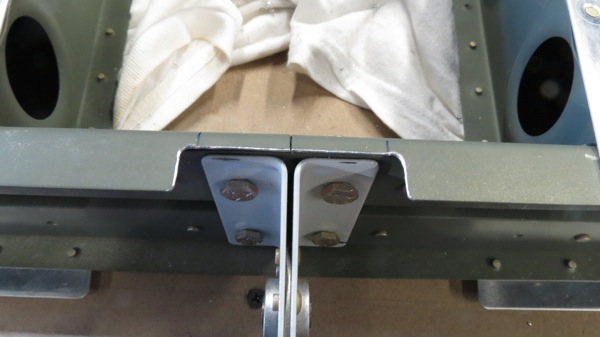 Whew!  Now I could hang each elevator and check it for proper travel.  Lefty got first dibs here, and I was pleased that it exceeded the specs with no problem.  I was ready to drill the control horn for the center bearing!  But wait…I put the drill bushing and bit in place, and it was obvious something was wrong.  If I’d drilled the way things were, the hole would be so far back on the horn that it would actually interfere with the tube portion by the time I had it the full size of 1/4″.  I was quite puzzled, especially since I’d triple-checked that the rod ends were set to spec.

After going in for some research, I went back out to look at how the counterweight skins lined up with the ends of the stab.  Presto!  They weren’t parallel.  Seems the root end of the elevator needed to come back a bit to get them aligned.  This would also move the horn aft and hopefully take care of the problem with the center bearing hole.  I dredged up some high-school trig skills and worked out how much I needed to move the rod end to get things lined up.  I was hoping to avoid doing a bunch of trial-and-error for the alignment…and it worked!  First try repositioning the rod end, I hung the elevator again and the alignment was perfect.  Score!

Of course, this meant that I needed to check the elevator travel again.  I didn’t expect my adjustments to cause any problems here, but I wanted to make absolutely sure.  That turned out OK, so I inserted the drill bushing and the bit and now the hole location looked great, so I drilled the pilot hole. (My drill bushing fits a #21 bit; this pilot hole is later enlarged to the final size of 1/4″)  I repeated this whole process on the right elevator; it also needed a bit of adjustment on the rod ends for alignment, and then I got that pilot hole drilled as well.  Finally, with both elevators off, I drilled the control horn holes to 1/4″.

There were a couple of housekeeping tasks to take care of next – torquing the lock nuts for the rod ends, adding torque seal to those as well as the bolts holding the elevator center bearing.  Finally, it was time to hang the elevators for real.  Let’s just say that installing those bolts and nuts is no fun at all.  There’s very limited access to the rod ends, and there may have been a few naughty words thrown about as I repeatedly dropped washers and nuts while trying to get everything started.  Then there was a lot of tedious wrenching – you can only turn the wrench about 1/12th of a turn at a time, so it takes a bit of work to get everything tightened down, but eventually got them done.

All that’s left is to get the center bearing done.  The instruction say to use stacked washers here,which looks like a pain to get right.  Getting the thickness of these spacers right is essential to having good elevator movement with no binding.  One of the well-known DARs on VAF recommends fabricating your own spacers here instead of stacking washers, and I think that’s what I’m going to do.  I picked up some spacers to cut down a few days ago, but had decided the washers would be better until I saw how tight it was between the horns and the bearing.  Better to maneuver one spacer in there than a series of washers.

That will be a task for another night though.  Maybe tomorrow night, we’ll see…I’m feeling on a roll right now and I really want the satisfaction of having all the hinge points torqued down so I can see if my elevators swing freely.  I’ve seen where some guys have spent a lot of time on these, so I predict a strong sense of satisfaction if I get it right off the bat.