It finally happened: I had to borrow a tool.  Last time out, I found that I was going to nee a longeron yoke to get the lower trim tab spar rivets squeezed.  I went ahead and ordered one last Sunday night, but I unwisely decided to go with an unfamiliar supplier, because they were a good bit cheaper than my usual destinations. (Avery and Cleaveland)  Well, that turned out to be an unwise decision…when I’d gotten no ship notification or anything after a few days, I called the place and found that the yoke was on backorder…until APRIL.  So I cancelled that order, and learned my lesson about not going with trusted suppliers.

Unfortunately, that left me unable to work on the tab for yet another weekend…until my good friend, flight instructor, and RV-7A builder Scott Will offered to loan me his longeron yoke.  Didn’t have to ask me twice.

Josie and I had a brunch thing today, and then I found myself attacked by a very persistent nap urge afterwards, so I didn’t get out in the garage until late afternoon.  While we were out, we stopped by Harbor Freight; I wanted to get some storage bins for rivets, because I’m not really liking the little drawer unit I’m using now.  While I was there, I also picked up some little tackle-box-type bins, which I intended to use to arrange my drill bit drawer in the tool chest.  That drawer was in horrible need of attention; I’d just sort of tossed everything vaguely drill-related in there since I got the chest, and the disorder was annoying even me. (and I’m one of those cluttered-desk-is-a-sign-of-genuis types) 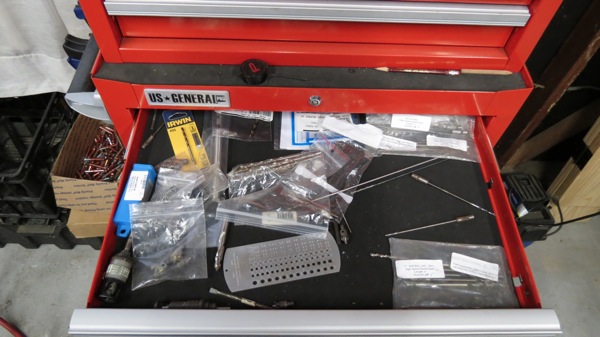 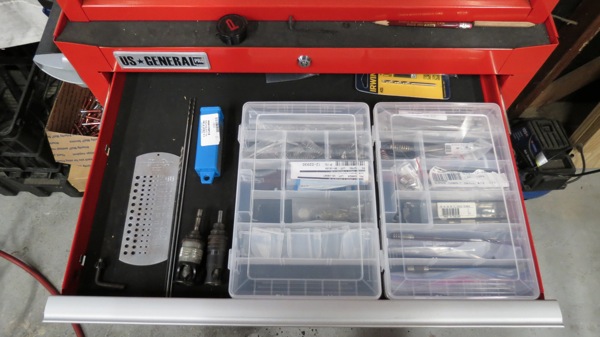 I decided not to move my rivets and such to the new bins, since I’ll very shortly be getting a large quantity of hardware, which might affect how I want to organize it.  So I moved on to the trim tab.  As expected, the longeron yoke was perfect for the lower spar web.  The only real difficulty was figuring out how to clamp the tab down and keep the skin spread so I could get in there with the squeezer.  Once I figured that out, though, things went quickly.  I also found a good use for a little inspection mirror I had lying around…can’t really see those rivets on the bottom otherwise, much less take photos of them: 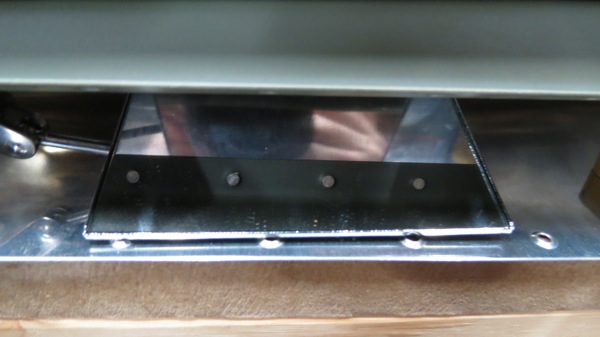 Next up, the other half of the hinge has to be drilled to the elevator.  So the trim tab has to be aligned properly with the hinge in place, then the elevator half gets drilled.  I used a piece of angle aluminum I picked up at Home Depot to serve as a nice straightedge along the trailing edge of the elevator and trim tab. (I was having so much fun I forgot to take a picture of this setup)  Then I had a bit of a problem…with the trim tab in place, it’s only possible to clamp the hinge half to the elevator on one end.  I didn’t want to mark the hinge half, pull everything apart, and then drill, because I could see that ending up with the tab being aligned badly.  So I decided to do the drilling with the tab still in place.  I clamped the hinge half at the accessible root end, then went down the line, drilling a hole, then clecoing that hole before moving along.  In this way I got the trailing edge alignment to look very nice.  Finally, I drilled the holes to hold the bent ears on the root end together. 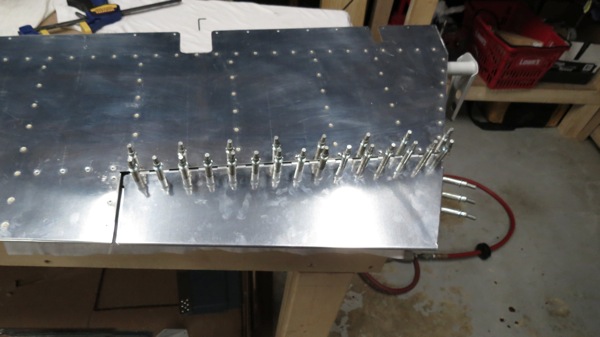 FInally, it was time to start riveting.  But there’s a bit of a gotcha in the instructions here: They have you carefully align the trim tab and the elevator with everything clecoed in place, then the very next step is to set the rivets in the top web of the trim tab spar.  Problem is, the holed in the tab ends take countersunk blind rivets…so those holes need to be dimpled.  Good luck figuring out a way to do that after you’ve riveted the spar!  So I removed the clecos in the top web, dimpled the blind rivet holes, and then once again temporarily mounted the trim tab to the elevator.  Once I’d gotten the twist right, I went ahead and set the blind rivets in the root end first.  Then I removed the tab and set the solid rivets in the spar.  Very nice.  That just left setting the last rivets in the elevator, for the hinge half I’d drilled earlier.  No problem there.

That would have been a good stopping point for the evening, but I had to do one of those “pointless-yet-enjoyable” things first.  I wanted to get the whole trim system in place and do a test run of the trim motor, so I could watch the trim tab move.  Not strictly necessary right now, but ultimately lots of fun.

Josie got a picture of me running the trim motor: 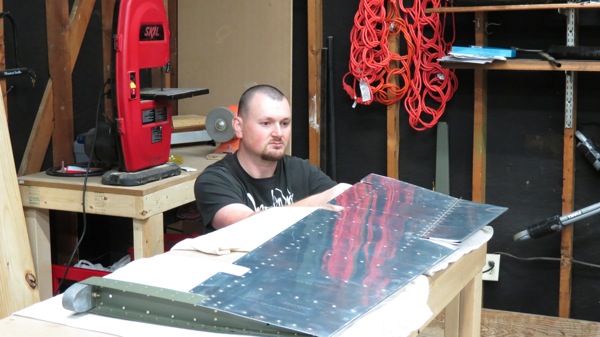 And I took a short video of the tab moving, and added some music for humorous effect.  I get the idea from watching this video that the reflective aluminum really confuses the autofocus on my camera: