Wow, I really went two weeks without working on this thing.  I had an excuse for last weekend-I was out of town-but the rest of it, well, I’ve got nothing.  I think part of the problem was that the sense of accomplishment when I finished the h-stab made my brain go into “finished” mode.  It was almost like going back out and working on the v-stab was like starting a new project.  But anyway, I finally got back to work today.

The good news is that the next component, the vertical stab, has a fair amount of work into it already and, barring any obstacles, could be done pretty quickly.  Previously, I’d gotten almost all the skeleton work done, with the exception of some annoying rivets.  Along the way, I’d damaged the root nose rib and decided to order a new one.  So today, I started out by drilling out the one good rivet I had and removing the old nose rib.  Then I had to prep the new rib…nothing exciting here, match-drilling, dimpling, edge finishing, prepping for primer, priming.  Easy.

Of course, there were some necessary waiting periods in there while the cleaned rib dried, and between coats of primer.  I used this time to fix the figure-8 dimple I put in the v-stab skin way back when.  I used the rivet gun with flush set and my back rivet plate to pound the dimple flat, cleaned up the edges of the extra hole, redimpled, and checked for cracks.  A good deburr and it was time for an epoxy patch.

That only took up one waiting period, so I next went back to the rudder I started on, also way back when.  I had one hole that needed an oops rivet; I clamped the stiffener in place, drilled to #30, deburred, no biggie.  I then set about back riveting the stiffeners on the starboard side.  Since I didn’t have a helper out in the garage today, I left the three trailing rivets on each stiffener undone; I want a second set of hands to hold the skin out of the way while I do those.

Oh hey, primer’s dry!  Let’s see if we can get this skeleton riveted together finally.  Those who have been following along know that I had a lot of frustration riveting this before.  I’d like to tell you that there was no frustration tonight, but that would be a horrible lie.  I did get the center rivet bucked on the second try.  Then I proceeded to foul up both end rivets.  Then I proceeded to bend the rib flange a bit while drilling those out.  Then it was quitting time. (Josie and I are going out tonight)  I’m not sure at this point if the nose rib can be saved; I’ll have to drill out that good center rivet and pull things apart again to see if I can straighten the flange acceptably.

So yeah, I got a fair amount done today, but I’m back in the land of frustration with these same three rivets.  Maybe it’s time to cough up for a Cleavaland Main Squeeze- I tried one at Oshkosh and it was truly an amazing tool.  With a no-hole yoke, I think I could squeeze these without a lot of problem; and given the low effort of the Main Squeeze, I’ll be a lot less likely to twist the squeezer while squeezing.  Hooray for more tool spending!

For those of you that sat through all this, your reward is a picture of me getting ready to drill out a rivet: 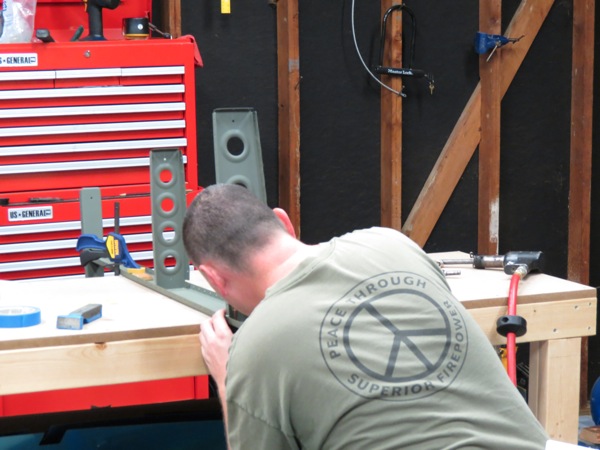