Short version: the first major assembly of my RV is DONE!

First task of the day was to get the front spar blind riveted to the HS-707 and -708 ribs.  Easy enough, then it was on to riveting the front spar to the skin, followed by the HS-708 main rib.  Not too bad here either; I’m starting to get a pretty good feel for bucking rivets without a lot of hit-check-hit some more-check again-etc.  I did get a little overconfident though…had a couple of bad rivets, but I’m also getting pretty good at drilling out.  Not perfect though-I did have one hole I enlarged.  No worries though-I drilled out to #30 and dipped into my supply of oops rivets.

I also noticed a change in my attitude as I was working today.  Previously, if I fouled up a rivet or made some other mistake, I was prone to getting annoyed, stewing about it, beating myself up, and generally reacting in a nonproductive way.  Today, it was just businesslike: Bad rivet?  OK, drill it out and replace.  Instead of wasting time thinking about my foul-up, I’d fix it in five minutes and be on my way.

Anyway, with the front spar and main rib set, next step was to cleco the rear spar assembly in place, then rivet it and the visible ribs to the skin.  Nothing complex here, just a lot of squeezing.  (Side note: I played with a Cleaveland Tool “Main Squeeze” at Oshkosh.  Boy, I wish I’d had that thing today-makes squeezing so much easier…)  At this point, acording to the instructions, all I had left was to blind rivet the rear spar to the HS-708 main rib.  But there was still riveting left to do- the rear spar hadn’t been riveted to the HS-706 tip ribs.  Either I missed it in the instructions or it was left out…in any case, setting those four rivets was the last task to finish my stab!

Of course, this was where things went awry.  Since I had the squeezer out, I decided to squeeze these four rivets as well.  Yeah…squeezing -4 rivets is tough with full-strength hands, never mind hands that just got done squeezing probably 100+ -3 rivets.  The first two were passable, barely.  The last two were both totally jacked up.  To make matters worse, out of some sense of symmetry, I’d put the manufactured heads forward, where they were nearly impossible to access for drilling out.

After some head-scratching, I decided to get out my angle drill kit.  That let me get a decent shot at the heads, but it was impossible to tell if I was centered on the head.  I really didn’t want to foul up my holes on the home stretch…so I decided to drill out with a smaller (#40) bit to help avoid getting any of the rib/spar material.  This worked mostly like a charm-I didn’t damage any holes, though getting those rivets out was a bear.

Finally, I set those four rivets again, using the gun this time. Much better.  Then I sat back and realized that I had a completed horizontal stab sitting right in front of me.  Lots of false starts along the way, but I got past it all and finished a part!  Now on to the next part, and the next, and so on…there’s a lot left to build! 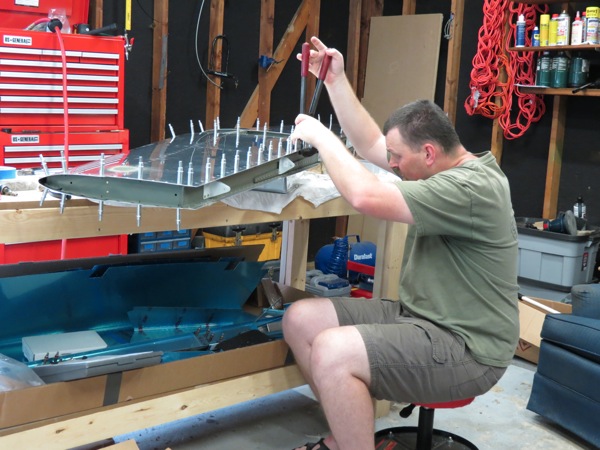 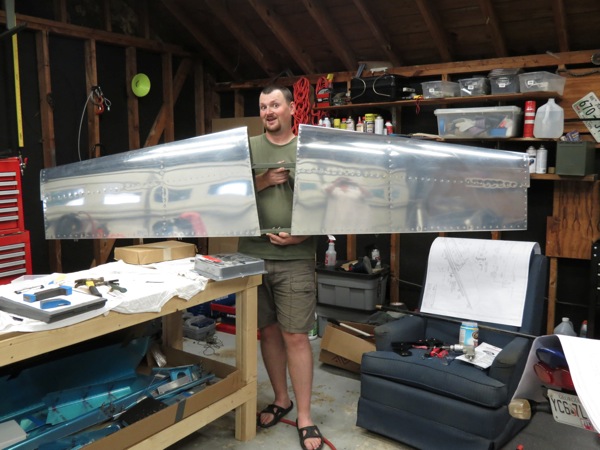 And now I have my first airplane part hanging from the ceiling: 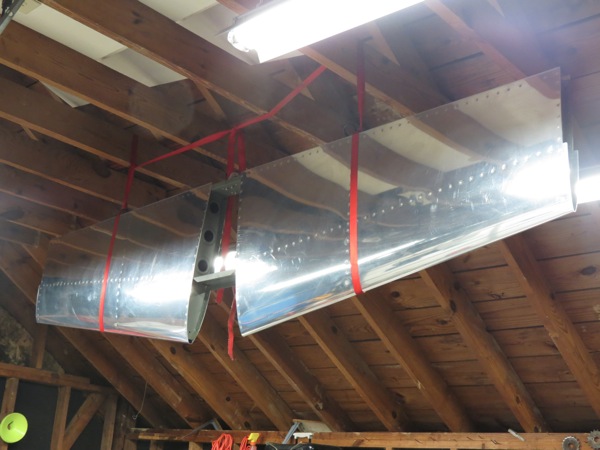