Back to the rudder

Brief summary: Time to order more parts.  I started today by pulling the VS-704 and -705 ribs off the v-stab spar, flattening the bent flanges, and then inspecting them.  There were indeed some holes that were a bit oversize.  Just for fun, I reassembled the skeleton in the v-stab skin, and found that the now-oversize holes don’t exactly line up, presumably due to all the bending/rebending/etc.  So I’ve decided to replace both the ribs as well as the VS-702 forward spar.  In a way, it’s just as well…I wasn’t going to try riveting that pesky spot again until I got my new squeezer, so I might as well wait for new parts while I’m also waiting for new tools.

In keeping with my new habit of “stop sulking about broken stuff and get back to work,” I moved back to working on the rudder.  Yesterday I’d back riveted the stiffeners on the starboard side, with the exception of the three rivets closest to the trailing edge. (I wanted a second set of hands to hold the skin out of the way while I did those)  I had help available today, but didn’t want to trouble her unnecessarily, so I decided to go ahead and repeat this task on the port side.  Then I could just recruit Josie for 15-20 minutes, and wrap up the back riveting.  Flawless plan!

Well, not quite.  Most of the back riveting went great; it really is a technique that makes things go fast without compromising quality.  But then the time came to hit those rivets on the trailing edge.  What I didn’t think about was what might happen with all the stiffeners in place, but the trailing edges not secured.  When we started and Josie held the skin back, the trailing ends of the stiffeners on her side of the skin popped out, thus getting all up in my way again.  We had to improvise a bit; on the first side of the skin, I hit all but the aft-most rivet on each stiffener, which was the one that was really interfered with by the opposite stiffeners popping out.  We then flipped the skin, and I was able to hit all the rivets; with just that one rivet on each stiffener unbucked, interference wasn’t a problem.  Then we flipped once more and I hit up those last rivets.

So there’s a lesson for when I get to the elevators…finish the stiffeners on one side completely before going to the other side.  Sometimes plans for efficiency can have the exact opposite effect.

At this point, the next step was to bend the trailing edge.  The rudder skin comes pre-bent, but only partially.  This gives the builder room to get in there and rivet the stiffeners; once those are in place, the trailing edge is bent to the “final” degree.  Doing this bend requires a homemade bending brake, which is just a couple 2×8 pieces attached with hinges.  The trailing edge goes between the planks, they get squeezed together, and the end result is a nice bend.

I didn’t have the materials, so a quick trip to Lowe’s before they closed was called for. (plus it was way past time for dinner)  Back home, the brake went together in no time.  I clamped the brake to the workbench, laid the skin in place, supported the other end of the skin with some 2×4 scrap, and then clamped the skin down to keep it from moving.  Josie came back out to help and we got the bend done in no time. (I was so excited that I forgot to get pictures of the brake setup!)  I then clecoed the spar and ribs into place to check the trailing edge for straightness…it looks GREAT!

I was kind of surprised how easy the bend was.  I’d done some reading on the procedure beforehand, and found a guy who claimed to have agonized over getting this bend right for weeks.  I guess I can see how this bend is a real commitment, where a mistake means it’s time to start over, but on the other hand the bending setup is pretty elementary.

I wrapped up the evening by reading ahead in the rudder instructions and trying to visualize how the parts will go together.  I’m anxious to keep rolling on this, but other things will probably get in the way.  There’s a big deadline approaching at work, and we’ve been put on notice that there will most likely be some long days ahead this week…so I’m not sure if I’ll be able to get much, if any, time in the garage until next weekend.  Still, despite the setbacks I’ve had with the v-stab, I’m still making forward progress and getting things done.  I could work faster and be more productive, but the truth is it’ll be another month or two before I can order the wing kit, which in turn has an eight-week lead time.  So no matter what, I probably won’t have my wing kit here until near the end of the year.

Rudder skin with stiffeners in place: (note how wide the bend is compared to the next photo) 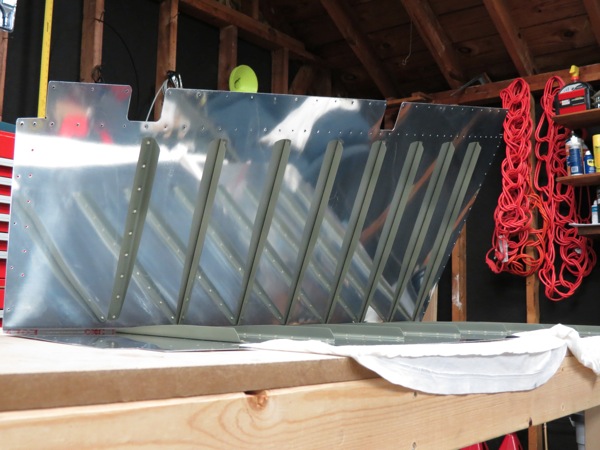 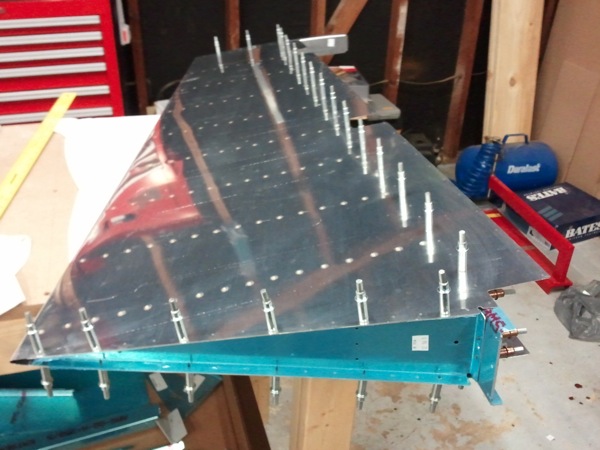