Got a late start tonight after going out for dinner with Josie.  I did, however, get my angle drill in, so I was able to continue working right where I left off.  First up were the tasks requiring the angle drill: drilling the rivet holes between HS-404, HS-702, HS 810/814, and HS-405.  These were a piece of cake with the new angle drill.  From there, I finished drilling/match-drilling all the skin-skeleton holes.  Then everything came apart, I drilled the last eight holes in the outboard ends of the spar reinforcements, and that was that!

By this time, it was going on 10:00, and I’d been at it for 90 minutes.  I figured that completing the other stab would keep me out there until 11:30, at which point the neighbors might not appreciate the constant sound of spinning air drills and a running compressor.  Plus I have to get up early in the morning for the EAA 690 breakfast.

I did notice an issue as I was taking the port stab apart, and a look at the starboard stab showed the same issue.  The forward most holes between HS-405 and the skins are all a little tight on minimum edge distance.  I don’t see how I could have done this any differently, though… those holes are drilled using prepunched holes in the skin as drill guides, and the rib is further positioned quite positively off the rear spar channel.  There doesn’t seem to be any way that rib could have been shifed forward to allow for proper edge distance.  A touch of research seems to indicate that this is a common problem, and that the universal advice from Van’s amounts to “build on!”  But I’m sort of a nervous Nellie, so I think I’ll ask the folks over at VAF just to be sure.  Worst case, I think I could shore things up by adding an additional rivet without a lot of fanfare. 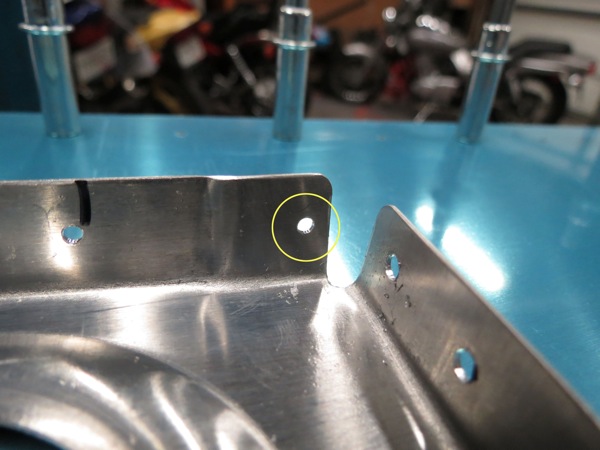