Skipping ahead again…this time to the rudder

So, as noted last time, I’ve been having some trouble with the front spar of the v-stab.  Since then, I once again convinced myself that I could make those rivets good if I was really, really, really careful.  So a couple nights ago, I went down and made another try.  And clinched them both.  Again.  In the process of drilling them out, the drill bit slipped off a couple times and made some divots in the nose rib flange.  I’d already put a couple nicks in before, which I’d duly sanded out and reprimed.  At this point, all those nicks were making me nervous.  And I still hadn’t ordered replacements for the h-stab reinforcements, so after seeing how cheap the replacement nose rib was, I elected to get a new one.  So now all three of my replacement parts are on the way.  And I’m even more convinced that I need another set of experienced eyes on these two pesky rivets.

In the meantime, I didn’t want to just sit around doing nothing…so I decided to start work on the rudder.  I poked through the directions for the rudder, and was going to attempt to gather all the parts together, but then I realized that there are a few parts for the rudder that have to fabricated from raw sheet stock.  So I decided to keep it simple, follow the directions by starting on the stiffeners, and worry about the other stuff later.

Making stiffeners is pretty straightforward, just kind of tedious.  They come as long pieces that have to be trimmed to length.  A bandsaw might have made this faster, but I don’t have one…so it was snips all the way.  By the time I had all the raw cuts done, my right hand was feeling a bit worn out.  Next up was to clean up the rough cuts from the snips using the handy old scotchbrite wheel.  After a lot of shaping and deburring, I had some finished stiffeners, which I proceeded to cleco to the rudder skin.  By this time, it was after 11, so I decided to match-drill another day.

Some fun notes: One might note from the following photos that I left the blue vinyl on while trimming the stiffeners.  This was kind of dumb; if I’d pulled the stuff off before trimming, I would have had (I think) 10 sheets to pull off.  Instead, I had 32 sheets to pull off.  Oops.  Also, there was a moment of crisis while I was smoothing the rough-cut stiffeners on the grinder.  I went to grab the next stiffener, and realized…there was one missing.  I searched all over the garage.  I couldn’t imagine where that thing could possible have gone.  I was completely confused.  Then I found it…under another, longer stiffener.  Completely concealed.  That cost me about 20 minutes of doubting my sanity… 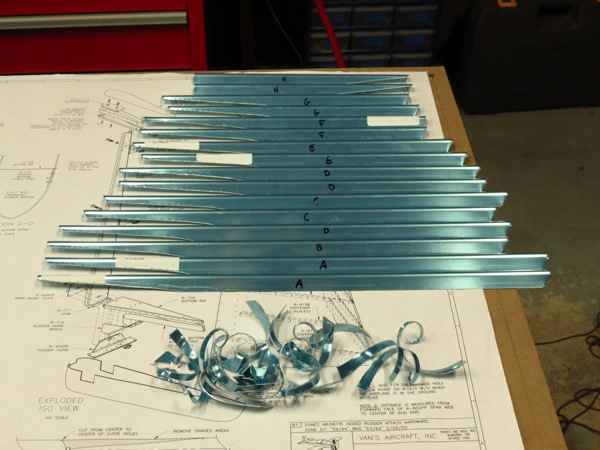 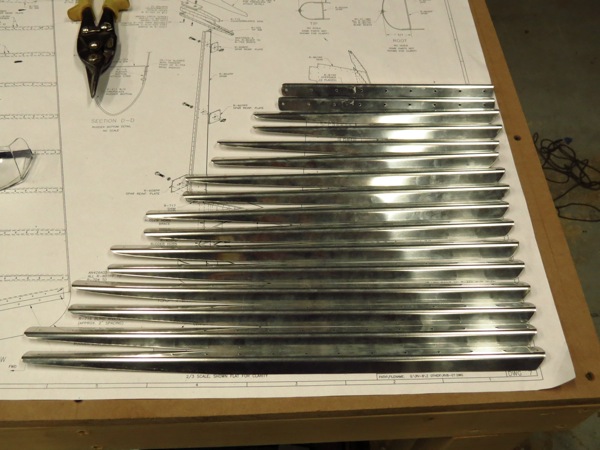 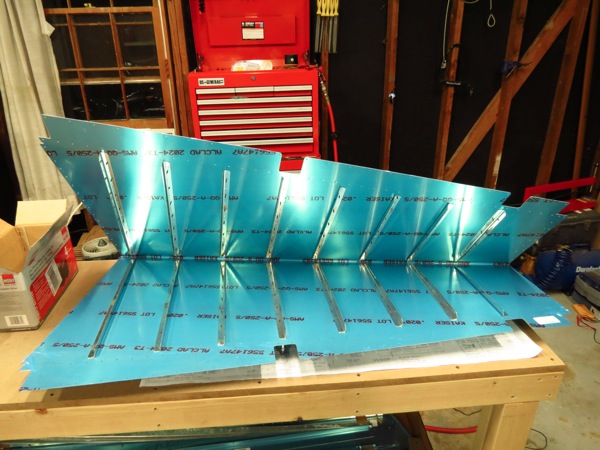