Oh look, another multi-day entry. This isn’t actually how I’d intended to do this, but I went to bed last night and completely forgot about writing this up. So yeah, anyway…yesterday was all about getting everything finished and topcoated. This involved a series of short work sessions over the course of the morning. First up was cleaning and relettering the main panel, then shooting the first coat of clear on it; at the same time, I shot the initial clear on the throttle quadrant parts from yesterday.

After giving those items a bit of time to flash, I moved them out into the sun in the hopes of speeding the curing up a bit. Unfortunately, while doing that, I saw that I’d gotten a little heavy with the clear on the quadrant parts, resulting in some crinkling. Those were going to need some more attention, unfortunately, but for the time being I left them in the sun and went back to shoot two-part clear on the switch console and panel wings.

While those were curing, I went back to the quadrant parts. My first thought was to try color sanding the clear to remove the crinkles; maybe there was a slim chance I could get away with doing that and then adding two-part clear on top. Unsurprisingly, that wasn’t the way things went; while I got the surface smooth by sanding, the clear was overly dull and even sanded through in a few spots. I decided to approach these by shooting yet another black coat on top, then just directly topping with two-part clear. There’s really no reason to add the intermediate single-part clear here, other then to be consistent with everything else…I didn’t think it was likely to affect the final finish.

So then there was just some more waiting for the black paint to set up a bit, before I finally went back and shot the two-part clear on the remaining parts – namely, the main panel and those pesky quadrant parts. By this time it was approaching midday and starting to get good and hot outside, so I switched to indoor activities for the rest of the day. I really wanted to start reassembling things, but it seems like poor judgment to not give the clear coat more time to cure – the can says it needs 24 hours to fully dry. No point in putting all this work and then mucking up the finish out of impatience.

So I picked back up around midday today, starting out with reinstalling all the switches in the console. I also spent some time last night thinking about how I wanted to color-code the switches. Way back when, I added colored switch covers which I wanted to use to visually differentiate things in addition to the labeling. So after getting all the switches back in place, I added the covers for good measure: 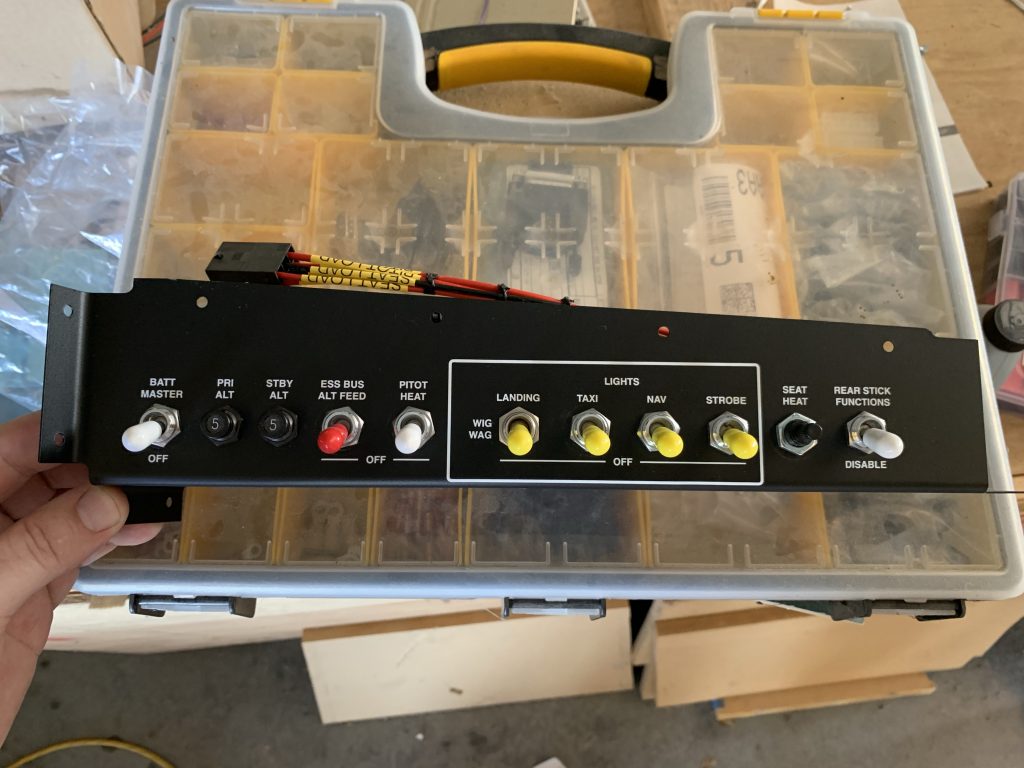 What I basically settled on for a system (and I use that term loosely) was:

After doing the switch console, I also reinstalled the switches and other component in the panel wings, but didn’t get a photo of that. Then, for the real fun, I went to town putting the avionics back into the main panel. Nothing complicated here, but it made for a nice progress pic: 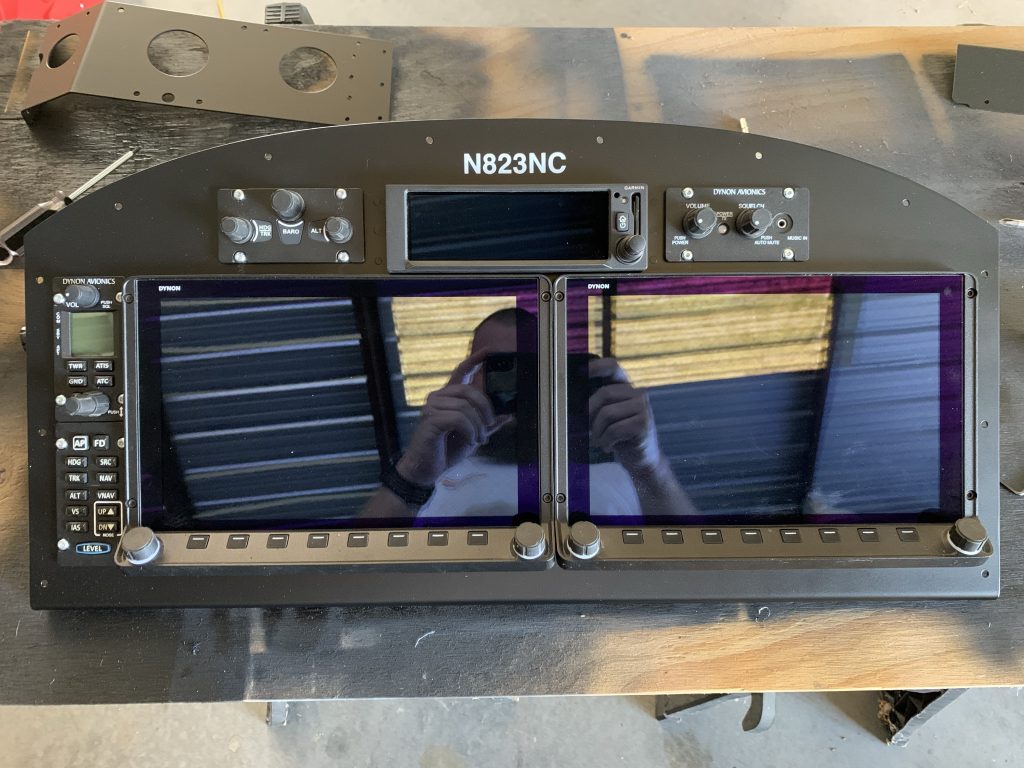 Finally, I started thinking about other admin tasks before replacing the panel. The first things I wanted to look at were the gear tower brake lines. I want to modify these to use different holes in the floor, in order to better work with connecting to the fluid passages in the gear legs. I also need to remove and clean these anyway; I unwisely left them uncovered and they’ve got mud dauber nests that need to be cleaned out. All of this is best taken care of now, with the panel not in the way and the fuselage not on the gear. Unfortunately, full-size combination wrenches are too big for working down in the bottom of the towers, so I’m going to need to pick up some stubby wrenches before I can keep going here.

So instead I turned to remaking the network cable between the baggage bulkhead and the main panel. Previously, I made this too short, not allowing for sthe same service loop length that I have with the main harness. So I got to dust off my electrical stuff and remember the pinouts for a Skyview network cable.

All in all that made for a pretty good day’s work. Tomorrow I may do some more cleanup behind the panel (everything is dusty from sitting out uncovered) and maybe start working on installing the wear plates and other preliminary stuff for the gear. I think I also need to pull the gear legs themselves out and flush out those passages – if I recall correctly they got uncovered at some point and got some mud dauber attention. Better to clean that out before I install them…