So last time out I’d gotten the flat black base coat shot on all the panel parts, and was waiting on the two-part clear I ordered. That came in this week, and I’d kind of wanted to test with it, but the thing to think about is that these two-part rattle cans aren’t good forever. Once you combine the two parts, there’s a limited amount of time to use the paint before it cures in the can – in this case, they say 48 hours. With that in mind, I needed to carefully time things, so I waited until the weekend to really get started. The only thing I got done earlier this week was to shoot the first coat of single-part clear on my test coupon.

Today after work, though, I got going on things. I cracked the first can of two-part clear and shot a top coat on my test coupon, and while that was curing, I got started on applying the actual labels. I figured that worst case, the test coupon wouldn’t go well, but I could still shoot the initial top coat on the panel pieces.

I started with the main panel section, which only needed my tail # top center. The one downside to this application is positioning is a little prickly. All the other labels center up on switch mount holes, so positioning takes care of itself, but here I needed to set up some guides to get the label where I wanted. After some thinking, I put down a couple masking tape lines, so that the text itself would fit between them with only a little extra space – easy enough to center up. After that, the letters went on nice and easy, and I was happy – until I carelessly removed my tape guides and they pulled up some of the black paint. I thought I could just re-shoot the black in that area, but the spots where the paint had come up were obvious. After a couple different attempts to salvage the panel, I ended up stripping all the paint off and starting over again. Mildly annoying, but I want to get this right from the start.

In the meantime, I moved on to other spots. After the previous issues, I was a lot more careful with the tape – while I didn’t need guide lines anywhere else, I did still need a bit of tape to hold the label backer in place while I transferred things. But with that extra care, I had no more issues with paint coming up, and everything went on quite nicely: 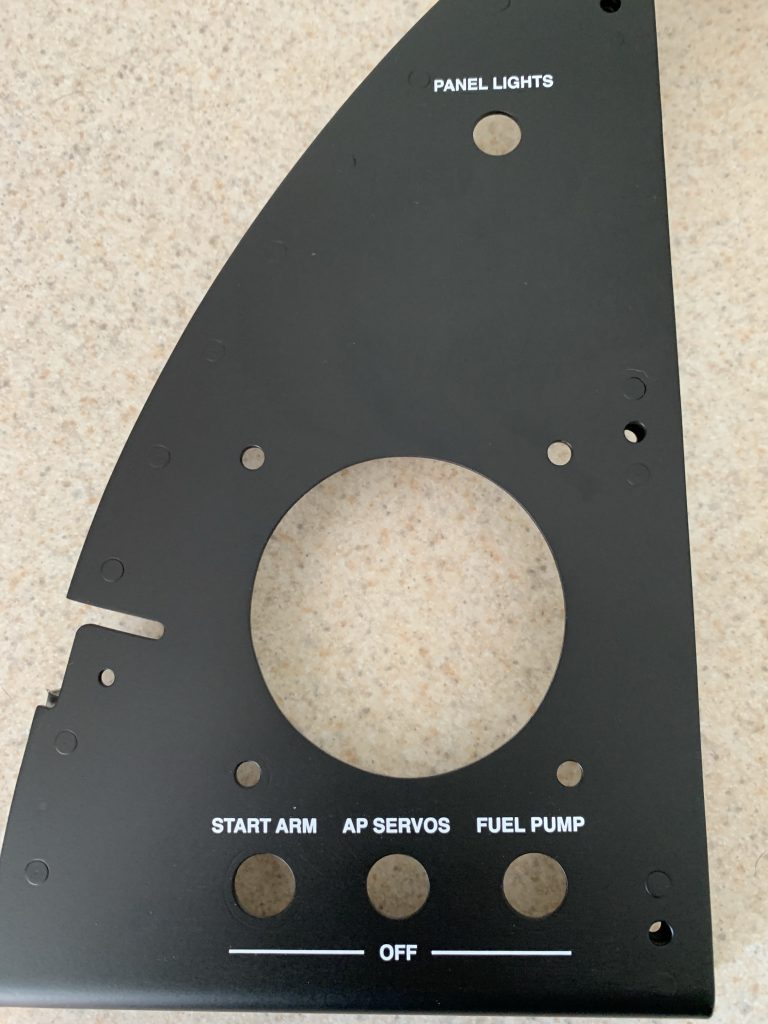 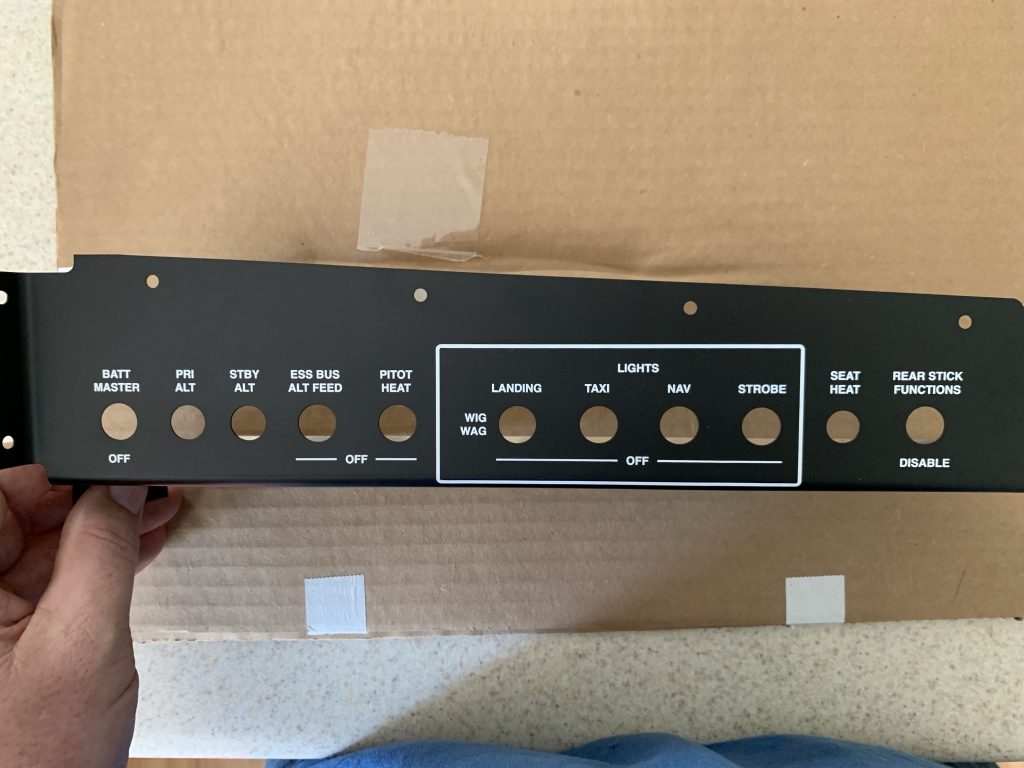 After applying all the labels, I went ahead and shot the single-part clear on all those parts; I figure I’ll let that set up overnight before doing the final two-part topcoat. I put the main panel under a heat lamp to try and fast-cure the black, and my plan is to apply the letter again first thing in the morning, shoot the first clear coat, and then come back and topcoat everything after a couple hours cure time.

The other thing I wanted to do was to come back and topcoat the throttle quadrant parts that I sprayed flat black some time ago. These pieces don’t have any lettering, but I wanted to topcoat these parts with clear like everything else, for consistency of the final finish. They needed some cleanup after having been on the shelf for a while, and there seemed to be some crud in the paint as well, so I ended up giving them a light scrub and a fresh coat of black as well; they’ll get the same treatment tomorrow as the main panel.

So, assuming everything goes well tomorrow, I should have all of my first round of labeling done, complete with top coating, and ready to go back into the plane. The only other thing I want to get done before that is to remake one network cable, which I made too short the first time around – it doesn’t have the service loop length required for me to be able to pull the panel for maintenance.

Finally, in other big news, my engine came this past week, and is now merrily sitting on a pallet in the hangar. So now I’m really thinking in terms of a punch list before I get the gear legs mounted, and I may very well do my first engine hanging not too long after that.