So here I am, back after another little break. I have yet to figure out my headset noise issue from last time, but fro some asking around I did dine one other person who’d had a similar problem with a Lightspeed headset. I’ve been meaning to shoot them an email asking about potential issues, but things have been kind of bananas with work and other stuff.

Continuing on the electrical front, I looked a bit at handling my control stick disconnects a few days ago, and was pleasantly surprised to find that I already have all the connector hardware I need on hand. Still need to actually do those disconnects, though…and even better, my engine has been assembled at Titan and should be shipping pretty soon…well, once I send them a check for the remaining balance.

The engine news has me thinking about FWF stuff again, which got me to revisit the engine mount fit. I’d been wanting to see about stretching the mount vertically a bit so that inserting the bolts was less of an ordeal, so I decided to look into that. The good news here is that I only need to stretch things by about 1/8”, but the bad news is that this structure is far beefier than the canopy frame I bent before.

To make a long story short, I tried a couple different setups before settling on the one that finally worked, as seen in the following photo: 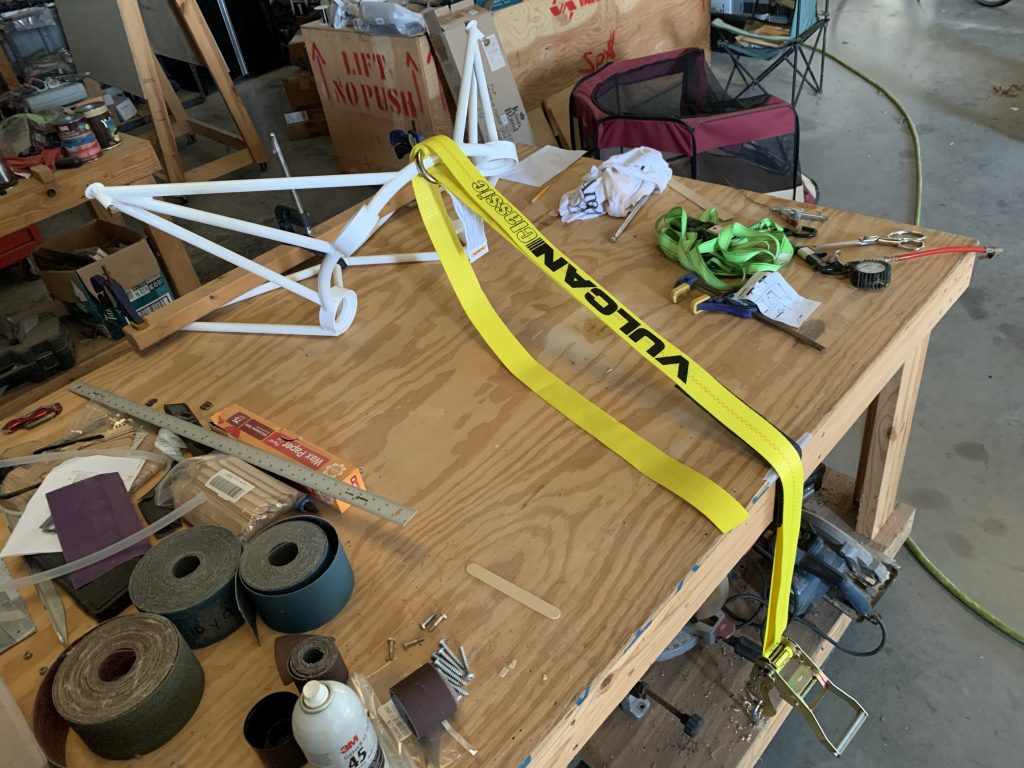 Here I have the bottom portion of the mount secured to my work table with a 2×4 and a few clamps. This gives me a good angle to attach a ratchet strap from the mount ring to a large eye bolt under the table. Once again considering the forces at play here, instead of a small ratchet strap I grabbed one of the big ones I have for securing a car on a trailer. I’ve also placed some hard plastic tubing, split down the middle, on the table corner to avoid a potential stress concentration.

I’ll just say up front that exerting this kind of force was more than a little scary, especially since with me standing by the table cranking on the strap, I’d be directly in the line of fire if my clamping setup were to fail. With that in mind, I added a backup safety strap between the mount and the clamp side of the table, hoping that if a clamp did fail, that’d keep the mount from becoming a deadly projectile.

In the end it took about three iterations – each one just going one tooth further on the ratchet – to get the stretch I wanted. The end result still isn’t perfect, but the force needed to align the mount while inserting the bolts is easy to exert with one hand, a huge improvement. Overall I’m very pleased; going into this I figured there was at least a 50/50 chance that I’d chicken out on cranking the ratchet strap before anything moved at all.

So at this point I’m working on a punch list of inside work I want to get done before the gear legs go on. I kind of want to go ahead and build the cover plate for the rear stick base, but I can’t be sure the full range of motion of that stick until the wings are installed and rigged, so I may end up waiting on that…or maybe I’ll fab up the plate but skip cutting the actual hole for the stick, I dunno.

Other things on the punch list are rigging most of the brake lines (but probably not leaving the pedals in place afterwards) and securing a few more electrical components under the seat floors, but…I think that’s about it.