Notably, this entry actually covers work done over a couple days – I did bits of work on the rudder tip over the weekend, but at some point it seems absurd to keep making short entries and having to invent new title variations. Hence me combining them instead.

After sanding the epoxy skim coat, I shot filler primer on the tips once again. This revealed a few remaining pinholes in both pieces, but this time, instead of doing a big sand-down operation, I mixed slightly wetter micro and worked it into each pinhole just using a finger, leaving a bit of excess around each spot. After that cured for a day, a quick bit of sanding smoothed everything out, and I shot primer yet again. Finally, at this point, the vertical stab tip was pinhole-free, but I found a few more stragglers on the rudder tip, so I repeated the same procedure again.

As of tonight, the rudder tip was also pinhole-free, but I wanted to do a bit of touch-up on the flanges. The “step” where the flanges begin was uneven in some spots due to buildup from my multiple epoxy coat applications, so I went to work with a bit of 120-grit on a popsicle stick to clean those up a bit and make sure the flanges were nice and crisp. With that done, I shot primer…yet again.

As primer tends to do, it highlighted a new problem I created during my flange work. Looks like I got a little overzealous with the paper here, and now I’ve got a new groove to deal with: 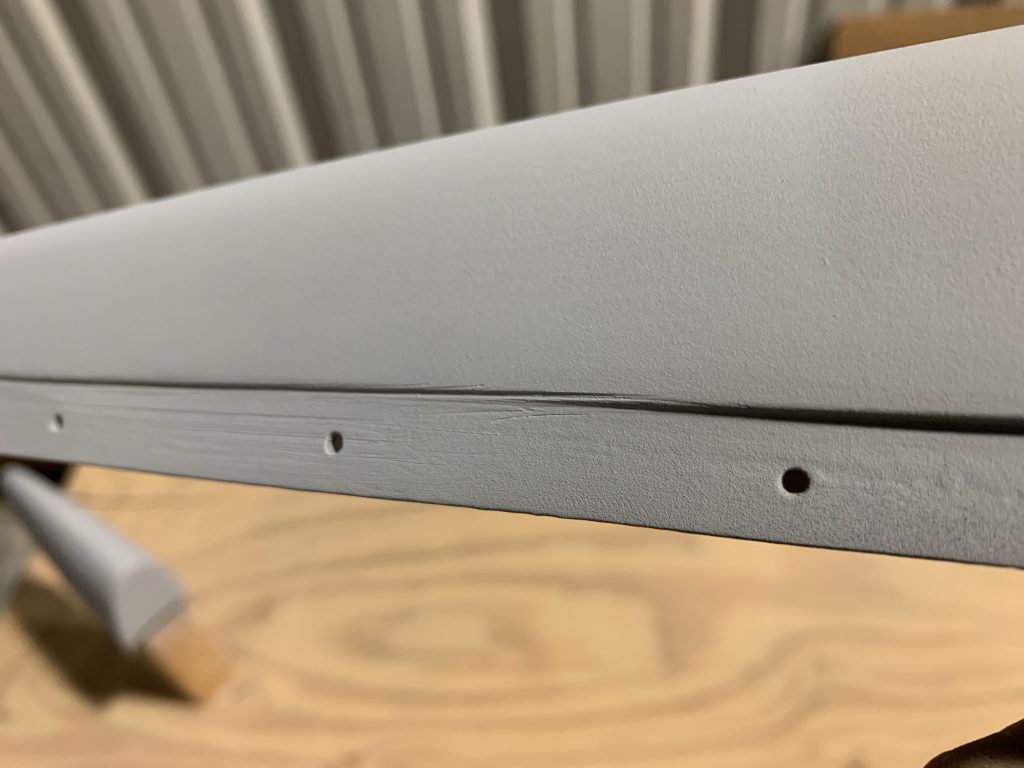 That’s probably fixable with a touch of micro – or maybe I should just go ahead and get some regular old filler for this stuff instead of continuing to make batches of micro and then throwing away 99% of them. Anyway, the rudder trip farce keeps going…

On the other hand, I’m feeling good enough about my fiberglass learning to get going on the horizontal tips. I laid out the rivet holes on the stab and got those drilled in assembly with the tip pieces. For the most part, they seem to fit pretty decently with just the cloches holding them in place, but I think I’m still going to end up adding some support further forward to help them conform a bit better. I also expect that I’ll end up building them up a bit to get a nice smooth transition from fiberglass to aluminum…here’s hoping that process goes a lot more smoothly than the vertical stuff.