Today didn’t go quite as I’d planned, but we still ended up OK. I’d been figuring on getting started riveting early, while it was still relatively cool outside, but in short I underestimated the work I needed to do before we were ready to actually do the riveting.

Before I did anything else, I decided to climb into the fuselage (without the turtledeck skin in place) to get an idea just how unpleasant it would be going back in the tail. The main thing I discovered out of this was that the gap left after making the platforms yesterday just wasn’t going to work – that hole was right where I needed to support myself while really far back in the tail. So the first order of business was making one more small platform section – but it was raining until about 8:00 or so, and I didn’t really want to sling a bunch of MDF dust in the hangar, so that had to wait a bit.

There was also a bit more prep work to do. I got out the rear seat shoulder harness anchors – which get riveted along with this skin – and figured I’d better double-check the bolt hole for the belts. Good thing too, it was a bit undersize and needed to be final-drilled and deburred. That would have been no fun working inside. I also went ahead and slipped the attach bolts in place, figuring they’d be harder to install after riveting the anchors.

Finally, I had to actually get the skin in place and clecoed, along with the harness anchors, and also drill that one botched hole up to #30. By this time I was already getting a good sweat on, so after talking to Josie we decided to put off riveting until the evening when it cooled off again. I did go ahead and work on some riveting that I could do solo – more importantly, it didn’t have me lying in the tail baking. That took care of the forward- and aft-most bulkheads, along with the rivets in common with the longerons about half the length of both bays – all told, maybe about a quarter of all the rivets.

I did stop at some point here just to get a photo of the cave I was going to be dwelling in later that day: 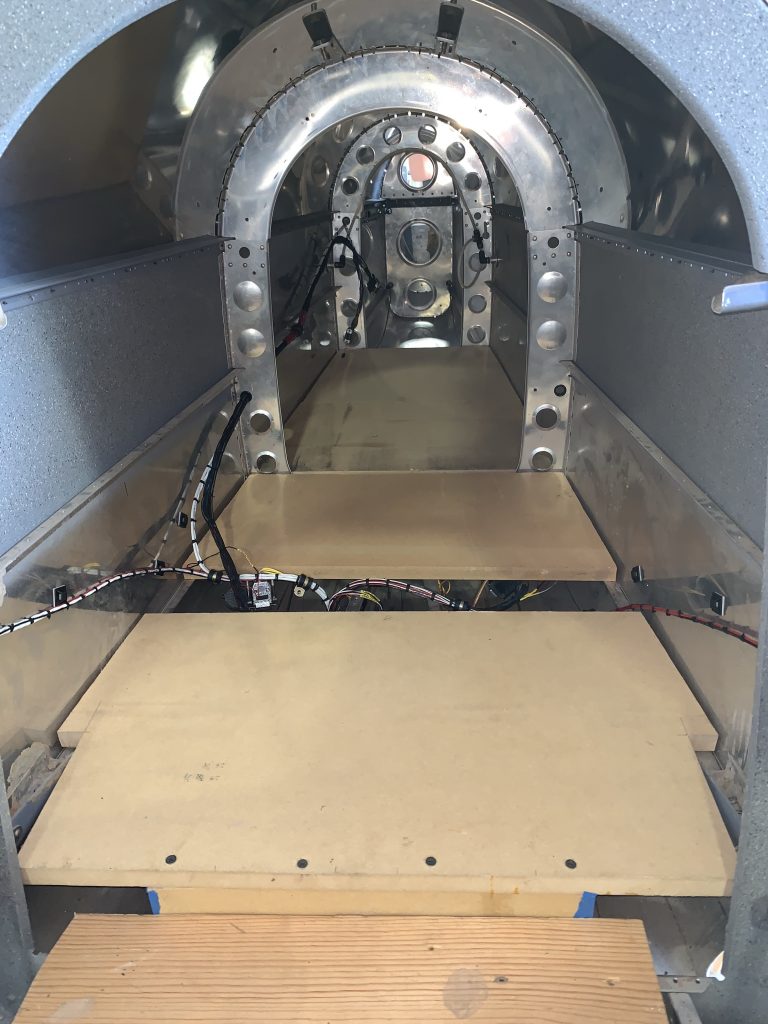 Not wanting to waste a holiday, I moved on to starting canopy work. The first portion of canopy fitting is just fitting the slider frame, and the first part of that is working with the rails that the canopy slides on. There’s one rail on each side of the cabin, plus a third atop the tail cone that the back end of the canopy slides on, and that third rail was the first thing to work on.

The rail comes in two pieces; first, there’s a narrow piece of thick stock, which has already been bent at one end to the required contour. This bent end drops into a receptacle just behind the back seat, and the canopy will drop into that receptacle when closed. However, the tip of the piece needs to be trimmed to a bit to sit properly inside that receptacle, so I got to spend some time carefully filing a taper on it: 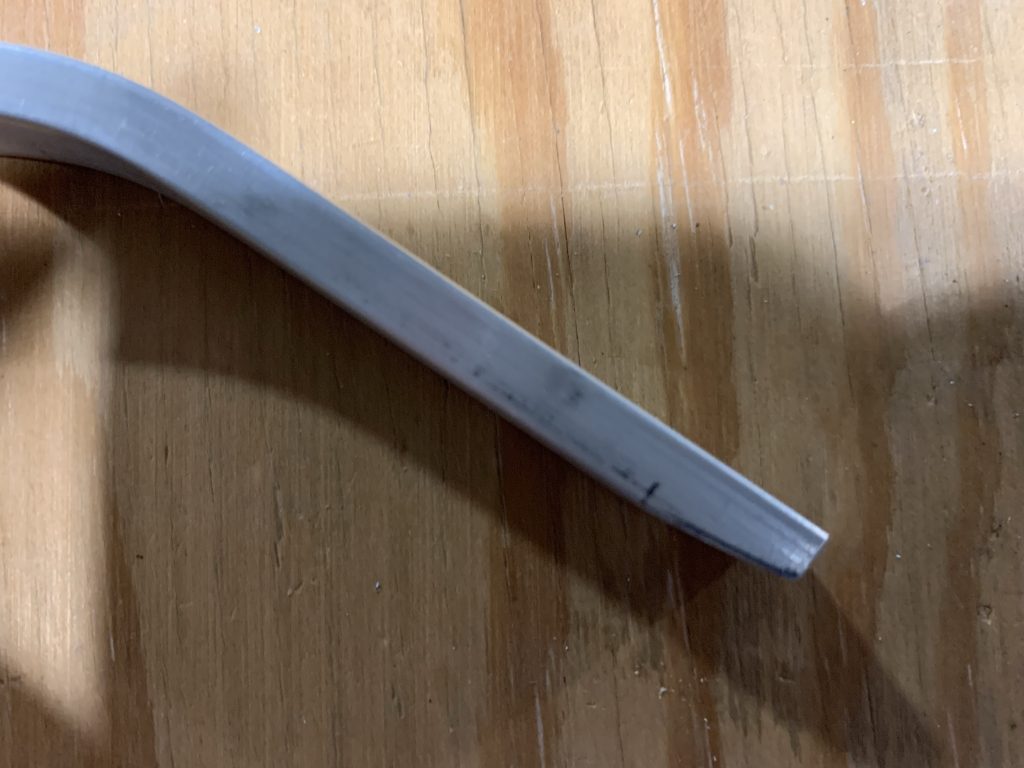 The other piece of the rail is a wider strip of Alclad, which sits atop the thick stock piece. In assembly, this creates a sort of T-section rail, along which a block will actually slide. The strip needs to be bent to match the contour of the other piece, an operation that took quite a bit of trial-and-error. As can be seen here, it also comes oversize, and needs to be trimmed to final length now that I’ve got the contour matched up: 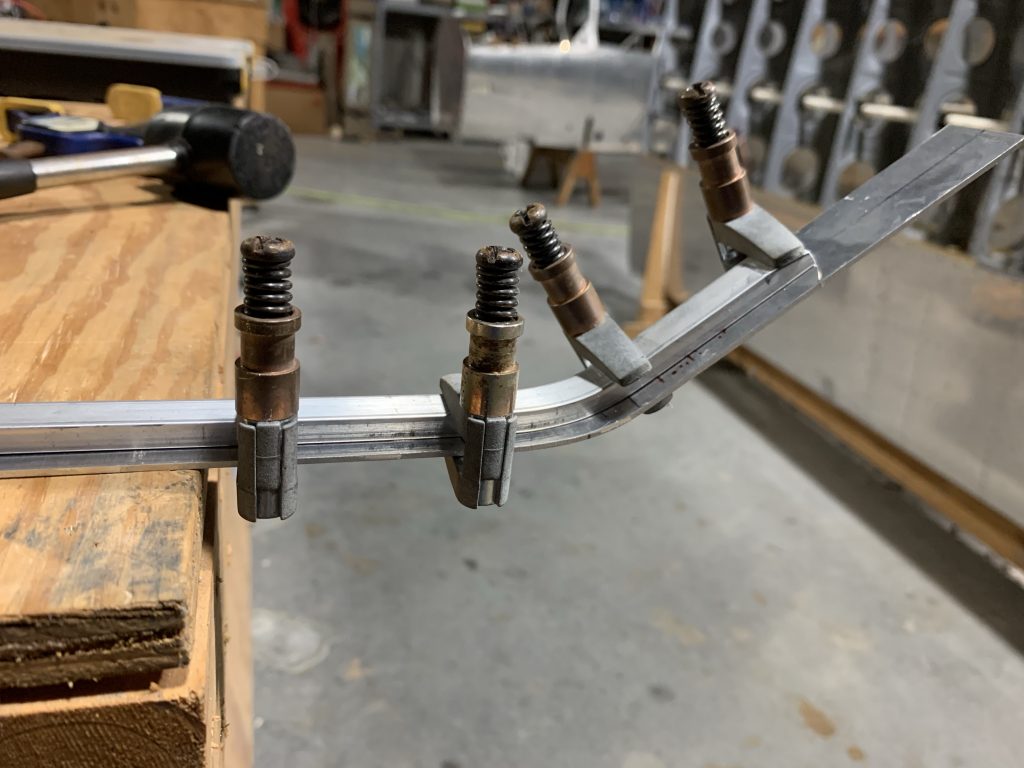 Next up will be laying out a bunch of rivet and screw holes on that strip; the rivets will join the two pieces into one units, while the screws will attach it to the actual fuselage.

That got us through to later in the day, when it was finally time to rivet. This went pretty well, and while it wasn’t enjoyable, it also wasn’t as miserable as I anticipated. Of course, we only worked on the forward bulkhead, so I haven’t yet had to slide back where it’s really tight. Makes for a decent selfie though: 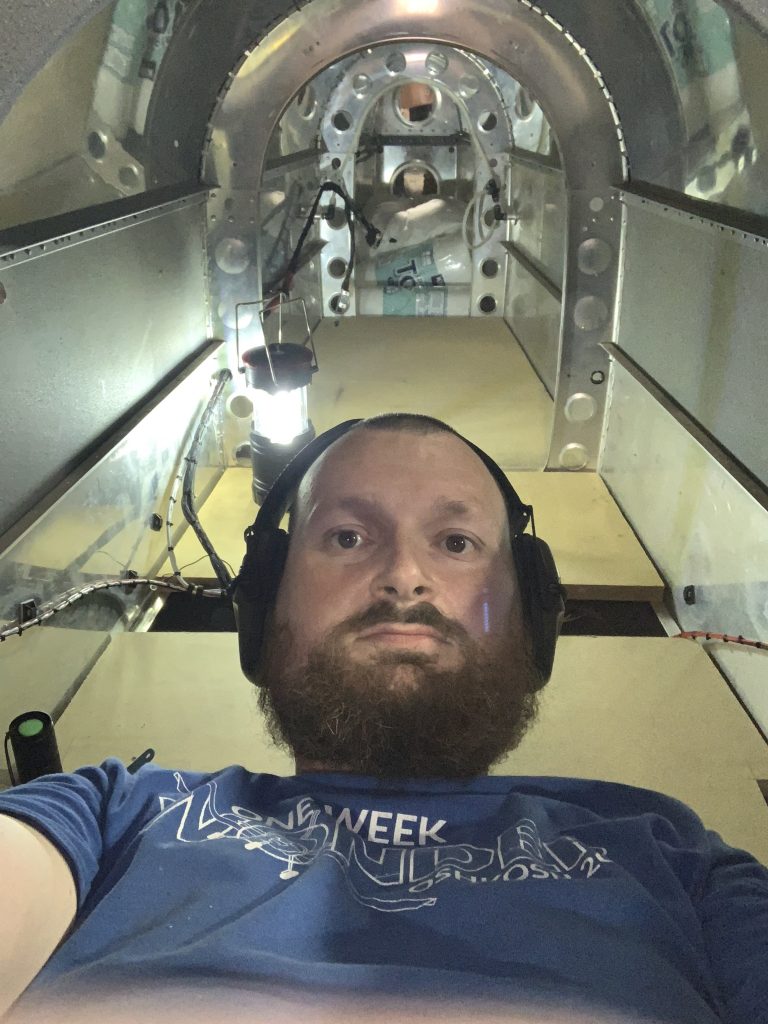 Fortunately, the fan I rigged up alongside the fuselage worked pretty well for making it more tolerable back there. The real problem was that while lying back there, I was staring at a concave reflective surface. Remember those funhouse mirrors who you were a kid? This was kind of like an extreme version of that setup, made even worse by my eyes seemingly not wanting to quite focus on the reflection. The effect was pretty trippy, and an attempt to get a photo just doesn’t really capture it, but still looks amusing: 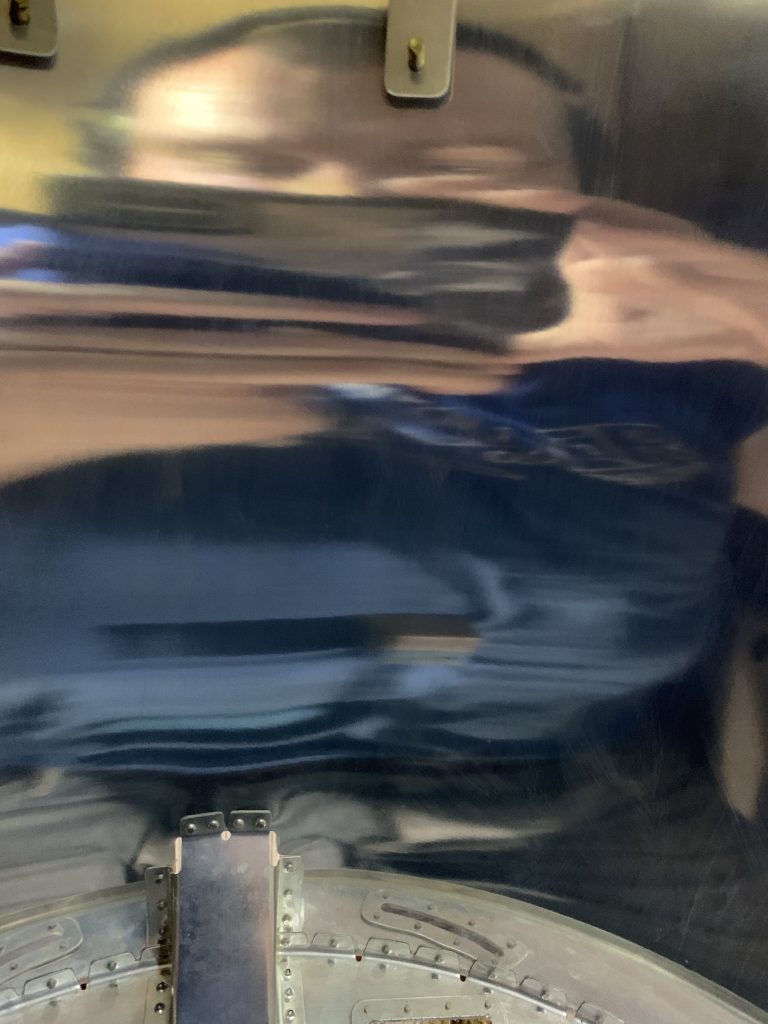 So that takes care of one night – we just got the rivets around the canopy receptacle, plus the forward bulkhead and the harness anchors. It doesn’t seem like a lot, but it also takes care of the more complex pieces (this session required four different rivet sizes, plus adjusting the gun pressure several times). I think the next session should go a lot more smoothly; we might not finish (unless we do a really long session) but I don’t think it’ll require more than two more…and then it really becomes canopy time…