Well, today I went through several levels of troubleshooting but it all paid off in the end. Working off the idea that my power supply wasn’t performing well, I decided to try adding a battery in parallel. At first I tried the small backup battery for the CPI2 unit; I removed it from the plane last night and let it charge on a battery tender overnight. This morning before work, I tried adding it in parallel – no change. I even tried powering the panel off the battery alone, to no avail.

In retrospect, this should have been a major hint as to what was going on, but I didn’t get it. Instead, I concluded the battery was too small as well, even though that seemed nonsensical since the ignition is going to draw significantly more power than a single EFIS display. So i extracted a battery from a motorcycle, gave it a good charge, and tried that after work. Same result again, which was really weird.

OK, next step is to take the aircraft wiring out of the picture. I took one of the original Skyview harnesses that I never used, removed everything except the power and ground leads, and connected those to the power supply. This time, the display booted up, and for a moment I thought I’d had a breakthrough…but then it started flickering again.

After a lot of head scratching – plus bouncing ideas off my neighbor, who’d come by to take my firewall rotisserie fixture for his -8 project – I really was suspecting the connections. Up until this point i’d been using some test leads I had with alligator clips on either end, since they were easy to install. To make a long story short, I replaced both leads with actual terminated wires, and finally I was in business: 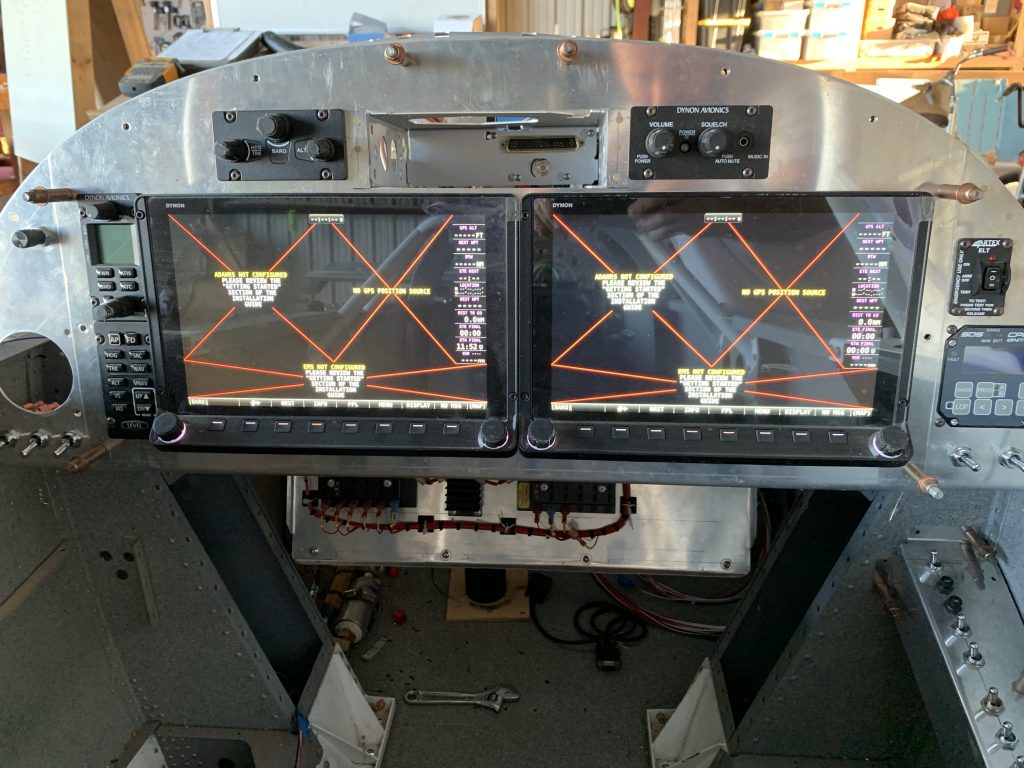 From that point, I started adding things back until I was powering both busses again, and I was able to get the entire Skyview system up and running. I configured all the network devices, got an initial hack at a display setup done, and generally just kind of sat there playing around with things. Lots of stuff isn’t going to be functional at this point – no GPS signal in the hangar, the engine monitoring obviously has nothing to monitor, and so on – but by god, it looks like airplane stuff. 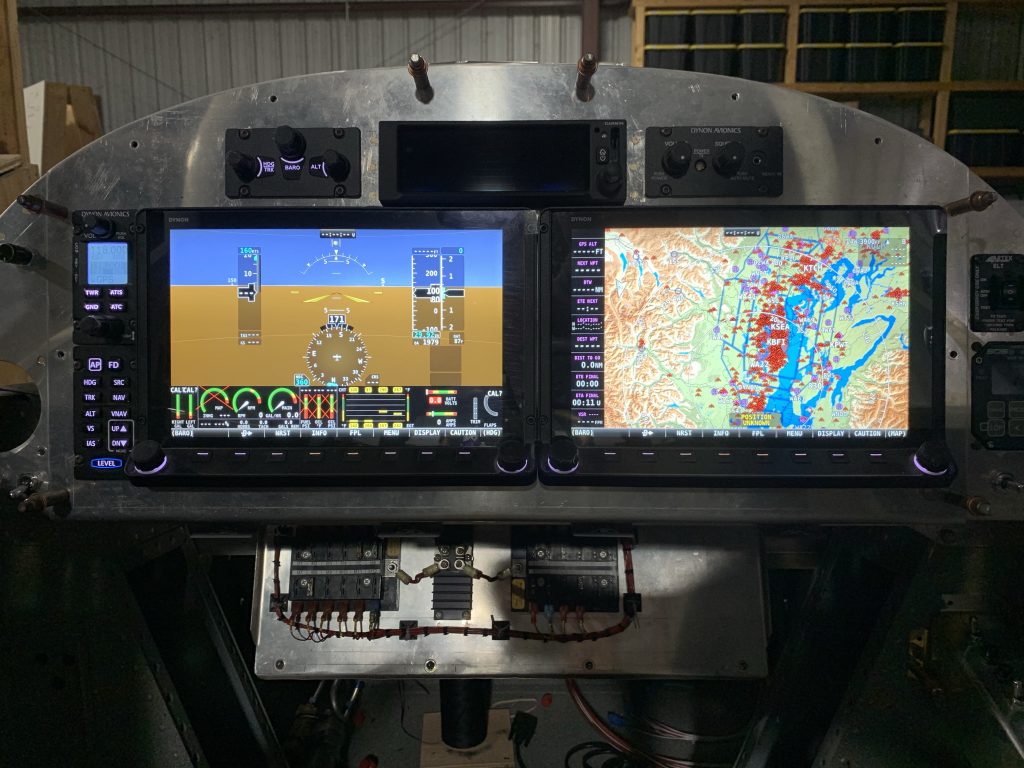 The only rub here was the GPS-175, which didn’t want to power on. I reverified the connector pinout, made sure it had power/ground where appropriate, but still no joy. But when I connected the backshell to the GPS unit outside the rack, it powered up. Clearly there was a connection issue, but only in the rack.

Turns out that when I built this rack mount, I misunderstood how the mechanism for securing the unit in the rack works. I thought it was a simple locking tab, but it also has a threaded portion that mechanically pulls the unit into the rack. Well, even with the bezel of the GPS against the panel, the connector obviously wasn’t engaging. I’m pretty sure that, due to my misunderstanding of how the rack worked, I set it a bit too far back into the panel, so I’ll probably need to re-fabricate the angles that connect the rack to the panel.

I did go ahead and power up the GPS again outside the rack to try some configuration there. A nice VAF person sent me some information about getting the GPS properly talking to the Skyview units, and with his info, I got that setup done in under ten minutes; I was seeing message traffic from the GPS on the Skyview setup menu, and the GPS test mode was properly driving the Skyview HSI as expected.

So all in all a happy day. I guess now it’s about time to set all this aside and start thinking about working with the canopy. Only thing I still need to work out is routing the tail strobe wire out through the aft bulkhead, then I think I need to start getting the turtledeck permanently installed.