More stuff to terminate tonight, but before I could get to that I needed work work out some of the routing issues back here. I ended up adding a few adel clamps attached to the forward lip of the shelf, starting with one to secure the branch towards the ELT. This was the critical point, as I wanted to make sure I didn’t have tension on the ELT and ADS-B connectors. For now, the adel clamp is just clecoed into place; later on I’ll add nutplatesfor permanent installation.

Getting the secured let me start lacing up the branch across the front of the shelf, towards the left side, which in turn let me finalize the branches to the transponder and network hub. I added another adel clamp just before the branch to the the network hub, and one more just past the transponder. That last one is necessary to make sure the branch going forward for the flaps and seat heat control will lay against the fuselage skin and not rub against the backside of the baggage well.

So now it’s starting to really look organized back here: 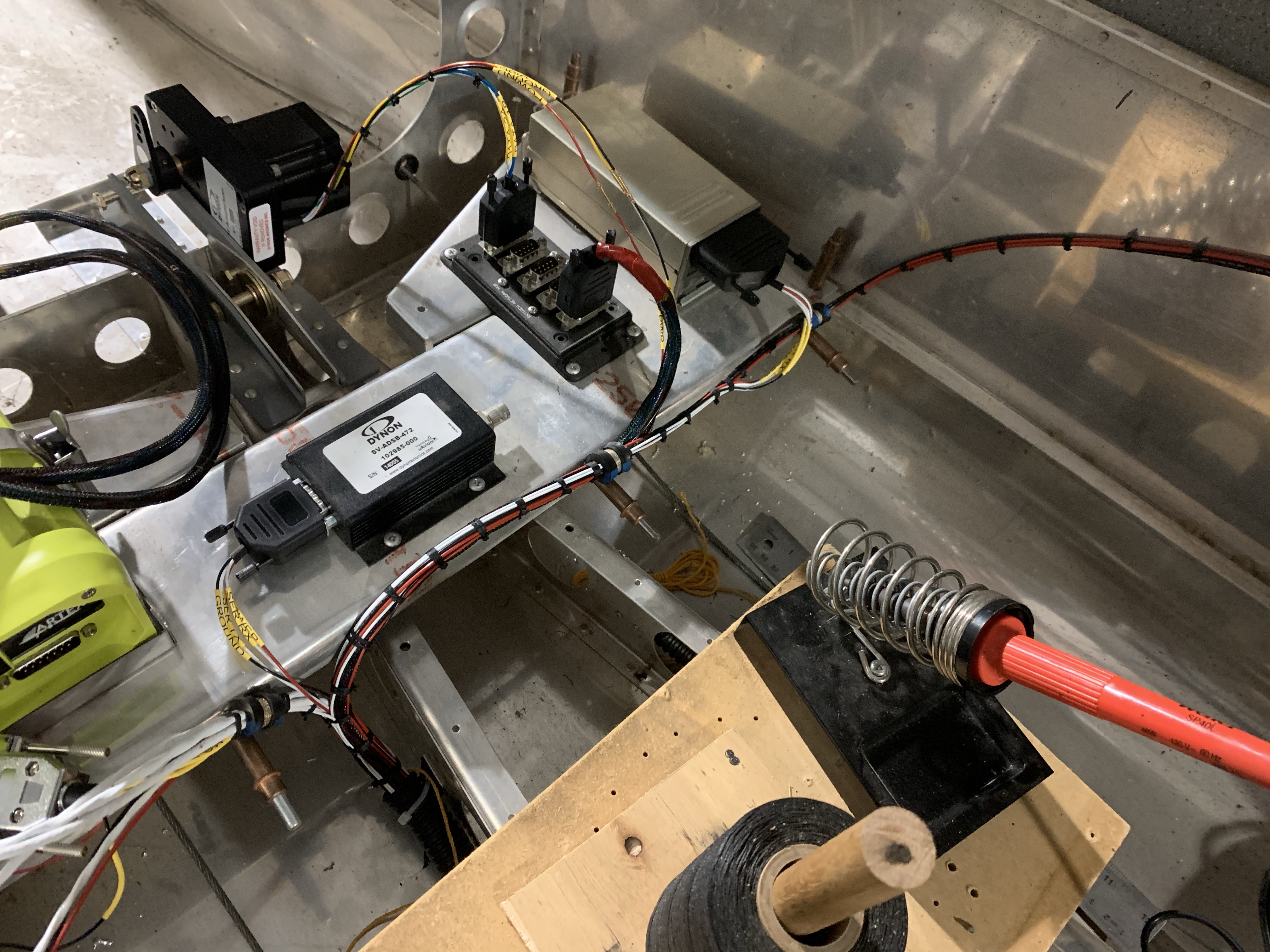 There was one unexpected development tonight. As I was finishing up the transponder connector, I needed a backshell. Apparently I didn’t have one of these on hand, but that’s OK, because the transponder came with a connector kit. I just needed to go root through the box it came in to find it. What caught me off guard was seeing that there was a small resistor included in the connector kit. That was immediately concerning to me because I had no idea what its purpose was, and that was a knowledge gap I needed to stop and resolve immediately.

Turns out that, for whatever reason, if you’re using an external GPS to input position data for ADS-B compliance (which I am, using the TSO’d GPS-175), you’re supposed to wire this resistor inline with that serial data line. I have no idea why this is, seems to me it ought to work like any other serial data line, but apparently not.

The immediate next question was whether I should stop assembling the connector and add the resistor at that point. I eventually decided against that; the most immediate reason was that I didn’t want to put it in the short pigtail from the harness trunk to the connector. I’ll want those solder joints to be somewhere they’re well-secured against any repetitive motion or strain. At the moment I’m thinking that I’ll either add the resistor a bit upstream in the harness trunk, or else install it at the GPS-175 connector.

Anyway, this mostly completed the wiring in the aft shelf area. I still need to finish up bundling, routing, and securing the branches that leave this area, in addition to reinstalling the two network cables from the hub back to the ADAHRS units. That last part may entail re-lacing the lateral trunk I did tonight, assuming I decide I want those two cables to be permanently secured to the trunk. That decision will hinge a bit on how I can route them, specifically as it relates to ensuring I can remove this shelf down the road if needed for service.