Boy, I should really work on this thing more. I’ve kind of been procrastinating because I was a little concerned about cutting this air vent hole. I’m not entirely sure why though, it’s not a strange shape or anything…I guess it was just the careful placement needed. There was also the thought of how to make the cutout…I used my nice little circle hole cutter for my template, but since I wanted to locate the actual hole based on the screw holes, cutting the actual vent hole to final size and getting the center exactly right seemed rather challenging.

In the end, though, I realized I could still use my hole cutter, just set smaller to make the initial cut. Then I could gradually enlarge the hole to my cut line and get everything nice and precise. So I just had to get past that hesitation to make that first assault with the drill. Of course, as usual the actual act was anticlimactic. Getting the hole expanded was a bit tedious, but that’s just the breaks of working up to cuts like this. I roughed the hole with a cutting bit on the Dremel, then used a half round file to remove the tooling marks and even out the curve a bit, then finished it with a sanding drum and a flap wheel. I also used an older flap wheel worn to a bevel to round the forward edge of the cutout a bit, since this will be visible. I may end up dressing that edge up some more, we’ll see how I feel about it later this week.

But hey, now I’ve got a vent. No mount screws yet, though…I’ve been considering whether I want to get normal cad-plated screws (which would match the per-plans screws attaching the center panel to the wings) or look for some black hardware to blend in with the eventual black panel paint. That’s not something I need to solve right now, though. 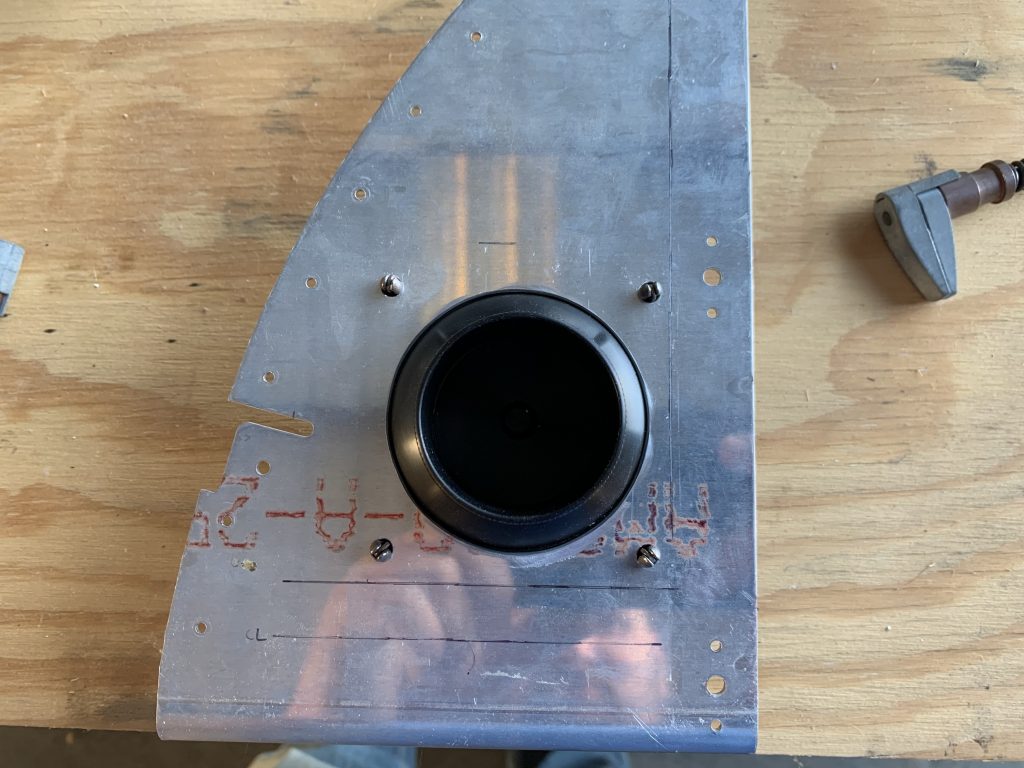 Next up is the real fun, cutting the right wing for the SDS CPI2 controller. That thing has an octagonal shape, which should present quite a challenge. Oh, and the edges of the cutout will be exposed just like this vent, so I can’t just sort of get close and then let the bezel cover things up like with all the other avionics. Should be quite a journey…