Fuse shelf planning and such

Alright, time to figure out some stuff with this fuse shelf. Shouldn’t be that hard, right? After all, I’ve already spent untold hours scratching my head and conceptualizing the layout and all sorts of stuff. Surely all I have left to do is finalize it all…surely…

First up was answering the question of whether using screws from above to nutplates was an OK choice. I mentioned last time I was wondering if this might be problematic with my knees being in the same area. So I brought over the low sawhorse, dropped the fuselage off the rotisseries setup, and temporarily installed the seat floor and front seat. Sitting inside, it was quickly evident that I had nothing to worry about with the nutplates. Even if I stretch my legs out as far as they can go, where my feet touch the firewall, my knees were just barely even with the back end of the shelf, and way below it. If I pull my feet back so my knees stick up further, my knees are completely behind the aft cabin brace, and thus totally clear of the shelf. I don’t think it’s physically possible for my knees to touch the bottom of this shelf.

OK, good deal. Next up was the question of attach screws for the fuse blocks. The original screws I bought for this have heads that don’t fit into the recesses in the blocks. The screws I bought to remedy this have the wrong thread. I could go searching for the perfect screw for this job…or I could just modify the ones I have. As you might guess, I went with the latter; the screw heads were only about 0.03” too large, so it was pretty easy to just grind them down a bit so they fit in the recess.

Alright, just solving problems left and right, time to nail down the component positions and get some holes drilled! Well…not exactly. It’s incredibly hard to visualize the routing of all the wire bundles here, and I felt like I really needed to work that out before committing to anything. At one point I decided to get some Romex I had lying around, pull the individual conductors, and use that for trialing the runs. But that didn’t seem to help that much, and in fact just made me more unsure about the whole setup. The problem was always the same no matter what I tried: there was a lot of stuff going a lot of directions and not a lot of space to make it all work.

This led to me doing a few research sessions, and after lots of poking around and thinking I decided to do some rearchitecting. Basically, the decision was to relocate some components off this shelf – specifically, the battery bus fuse block and the endurance bus alt feed relay are going to move forward of the firewall. This is actually good from a safety standpoint, since it means there won’t be an always-hot wire entering the cockpit, which would have been the case with the battery bus inside. That wire would, of course, have been fused, but it does still pose the possibility of a spark in the cockpit in case of an accident.

Anyway, removing those components vastly simplifies the fuse shelf. Instead of two power feeds that have to go several directions and join at the e-bus, now there are just two fuse blocks, two power feeds, (one for each block), and the e-bus diode tying the two together. This allows for super simple routing, and also leaves lots of room for the other bundles to be routed cleanly.

I did still go with my Romex routing idea, just to better visually represent things: 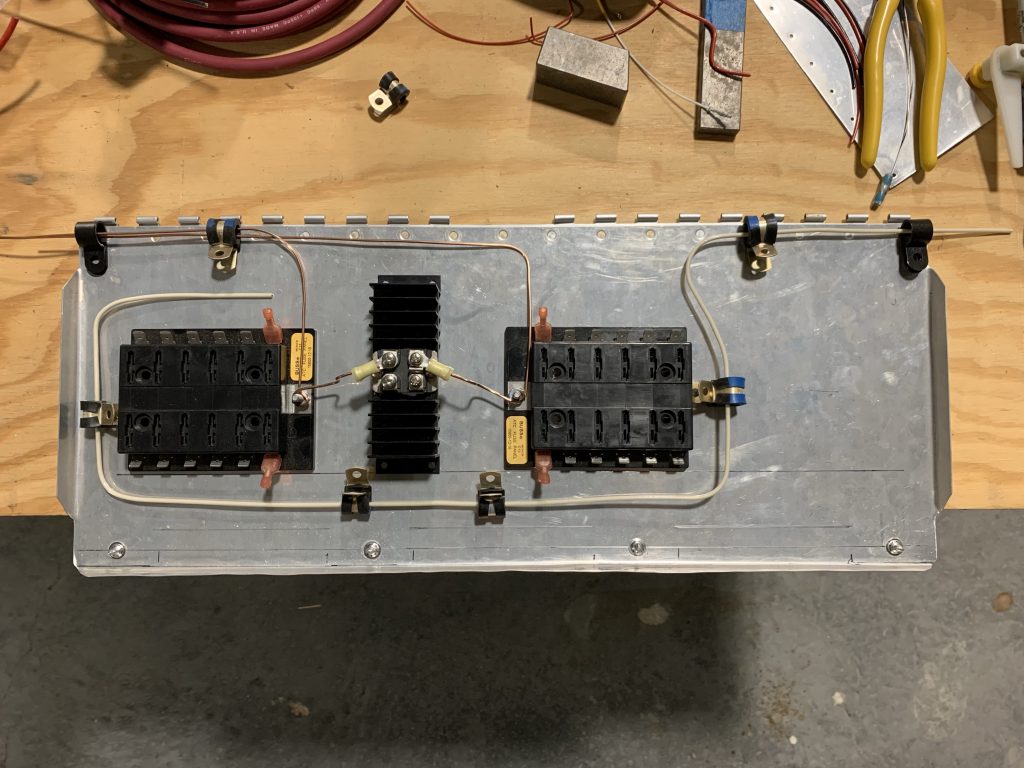 Here we can see the main bus block on the left, the e-bus block on the right, and the diode tying them together. Entering at top left are the two power feeds; these will be a fat 6-ga wire for the main bus, and a smaller 10-ga wire for the alternate fed to the e-bus. Individual circuits from the two blocks will route around the perimeter, along the lower (ie aft) side, and back up on the right before exiting at upper right.

One seemingly odd thing here is that the components aren’t centered on the shelf. This is actually intentional, and is done to support the need for the shelf to pivot. The wire bundles entering/exiting the shelf will be close to the pivot point, but they’ll still need to twist a bit to allow for movement; with that in mind, I need to make sure I provide a long enough “unsecured” run on each to allow for the twist. This is why, at both corners, there’s a plain plastic loop at the edge, and an adel clamp further inboard. Both bundles will also have an adel clamp just outboard, mounted to the baggage bulkhead, so each bundle will be snugly clamped in two spots about 4” apart, with just the loose loop in the middle to keep the bundle clear of the shelf edge.

So that’s pretty much the final layout; by the time I got to this point it was a bit late, and I want to sleep on this before I commit to actually making any holes, even though I’m feeling solid about this, far more than I was with previous iterations.