Did some more messing around with the lower shelf tonight. After putting the bulkhead and other stuff in place previously, I was able to measure more precisely the width I could make the shelf, so before moving to any fabrication I cut down my cardboard mockup and did yet another dry run of component positioning. This time I made it a little more realistic by laying some of the cable guides I got in place to better simulate the wire runs. I even went so far as to estimate the size of the bundles that will come off the fuse blocks because sometimes I get carried away like that.

The general idea here is that the two supply lines (one switched, one always-hot) will come in from the top left. Switched line goes to the main bus on the left, always-hot goes across to the battery bus on the right side. From there, one supply line will tap off the main bus, across the diode, and to the e-bus; a similar supply line will tap off the battery bus, through the relay, and act as the redundant supply for the e-bus. That feed will be switchable from in the cockpit if necessary. All the individual circuit feeds will be routed together at the bottom and exit at the top right, along with the switched ground for the e-bus relay. 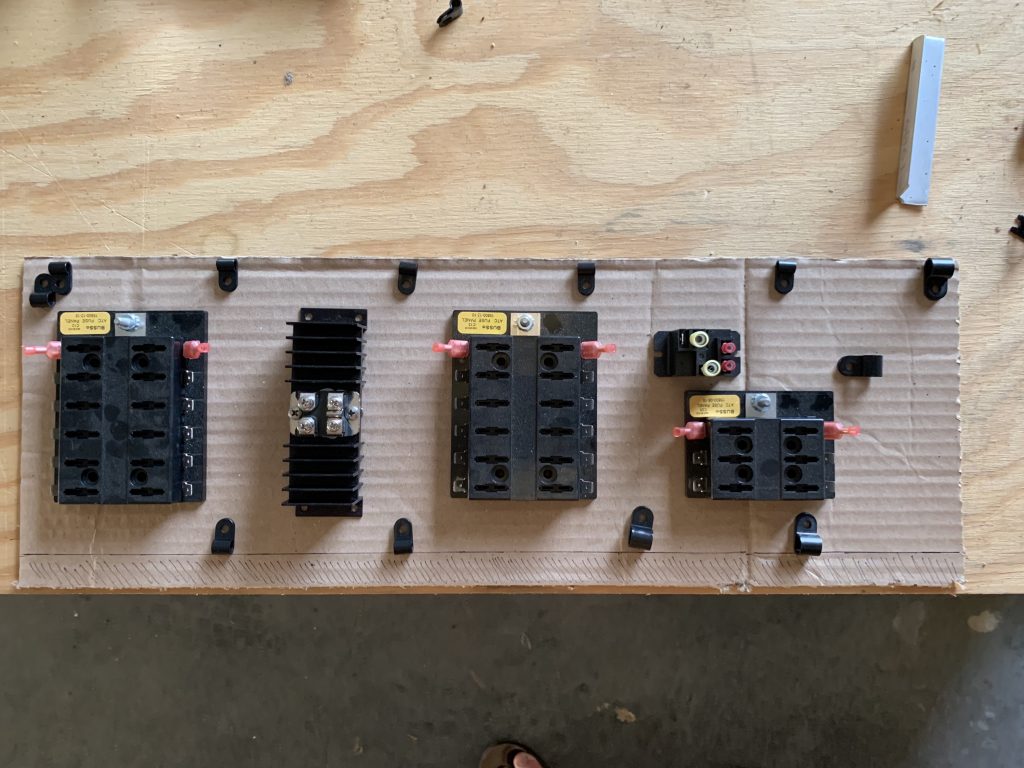 I also rethought the hinge setup for this shelf. Previously I was thinking of using a piece of angle to space the hinge point off the bulkhead a bit, to allow for clearance to the brake lines while the shelf was lowered. Doing the layout work above made me question the wisdom of losing 3/4” of width on the shelf, though, so I decided to retain the hinge point against the bulkhead, and just come up with some means to limit the travel of the shelf when lowered. This can be done rather simply, it turns out – I’ll want to add stiffening flanges on either end of the shelf, and if I orient them downward, they can act as travel stops when they hit the bulkhead. I’ll probably eventually add some rubber or other material on the edges just so it’s not metal-on-metal, though it’s probably not a big deal.

Anyway, tonight I started fabricating the shelf. I cut off yet another section of that old wing skin, trimmed it to rough size, and also cut the piece of piano hinge. I actually ended up stopping at this point, because I want to carefully lay out the stiffening flange, seeing as how it will be acting as a travel stop. I’d like to be careful here, so I can get maximum travel out of the shelf (to provide the best accessibility) without hitting the brake lines.

So I’ll work that out, and then I can probably finish fabricating this thing in pretty short order.