I was really hoping for some cooler weather this week – we’ve been hearing about a potential “cool front” – but it looks like it’s not to be. And so today was just a normal stupid-hot Houston day, but I worked through it (mostly in short bursts, as per usual). I’d intended to get going on fabricating the lower shelf behind the panel – the one that will house the fuse blocks and other primary distribution stuff – but I ended up going in a different direction. As we’ll see later, this was actually a good thing.

Anyway, to start with I wanted to lay out the location of that lower shelf. The intent here is for the shelf to start at the lower edge of the cross-cabin brace behind the gear towers, and extend straight forward until it encounters the baggage bulkhead. The first thing was to figure out the vertical location at that forward end that would result in a level orientation of the shelf. This I worked out with a combination of a square and ruler, using a rivet line as a guide. With that, I was able to draw a level line on the baggage bulkhead, setting the forward attach point for the shelf.

Next, I wanted to get that bulkhead into the fuselage, so I could measure the distance from the brace to the bulkhead – which would determine the depth of the shelf. This sent me into a side trip of removing the rudder pedals, which was needed to get all the baggage floors in place, which were needed to locate the bulkhead precisely for measuring.

At some point, though, I changed and started working on the upper shelf. I don’t even remember why. The design here is similar – this shelf will start at the forward cross-cabin brace, which is higher than the aft one. At one point I was considering making this shelf actually slant from one brace to another, but that seems overly complex – so instead I decided to just have the shelf go straight back, and then have a 90° bend to a vertical portion that can attach to the aft brace.

So I did the measuring routine again, figuring out the depth of the horizontal and vertical portions. Then I cut off yet another section of my trashed wing skin, and got to work laying the part out. I wanted to also allow material at the ends of the shelf to bend down for stiffness, so that had to be accounted for. (I’ll likely eventually add another stiffener or two, once I figure out the device locations).

Then it was time for bending. Here’s the sheet clamped to the edge of the workbench, ready for me to apply some targeted physical violence with a hammer: 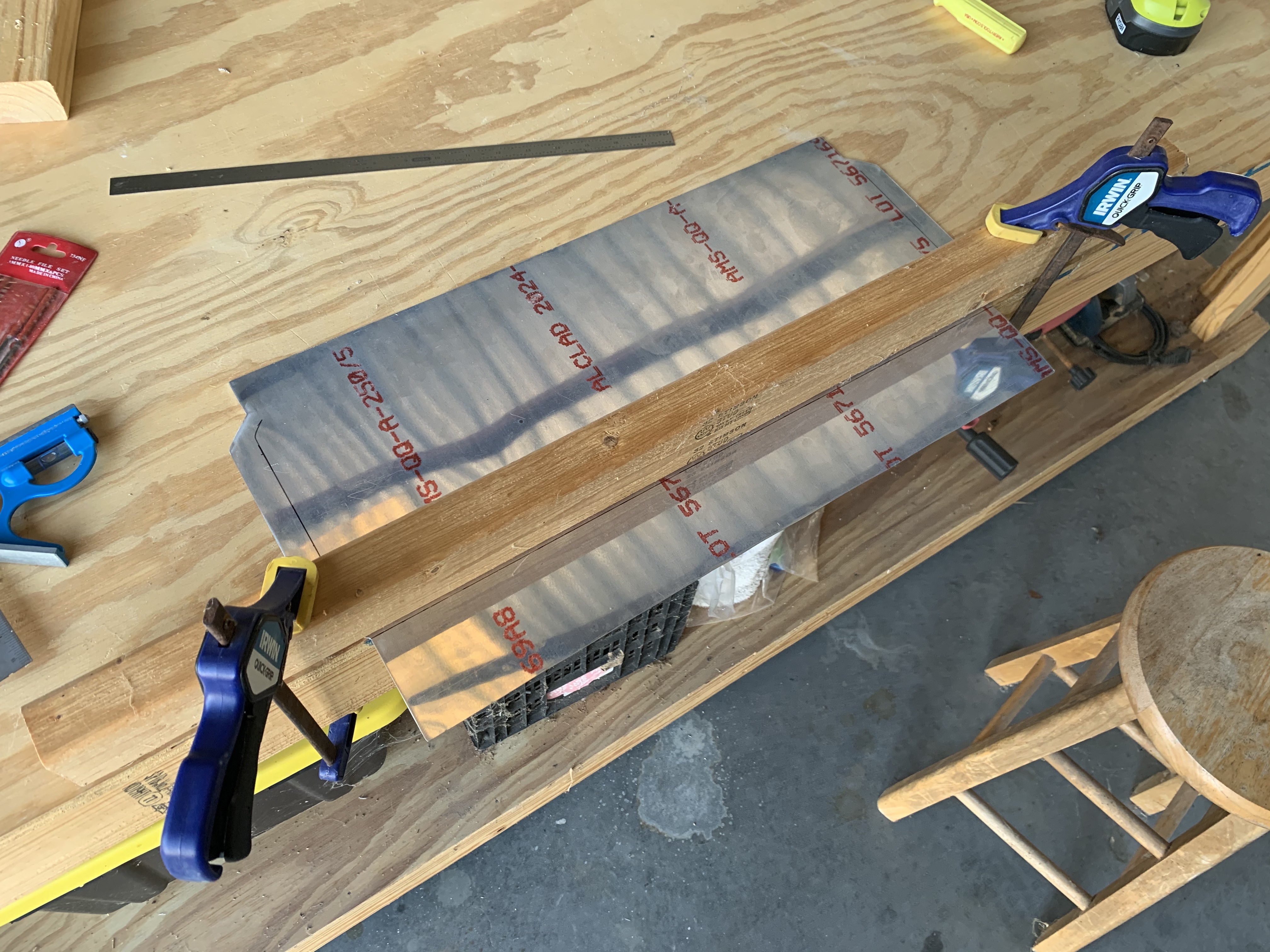 After making that bend, along with the two stiffening flanges, it was time to take a deep breath and go for a test fit. Whew, it fits nicely! 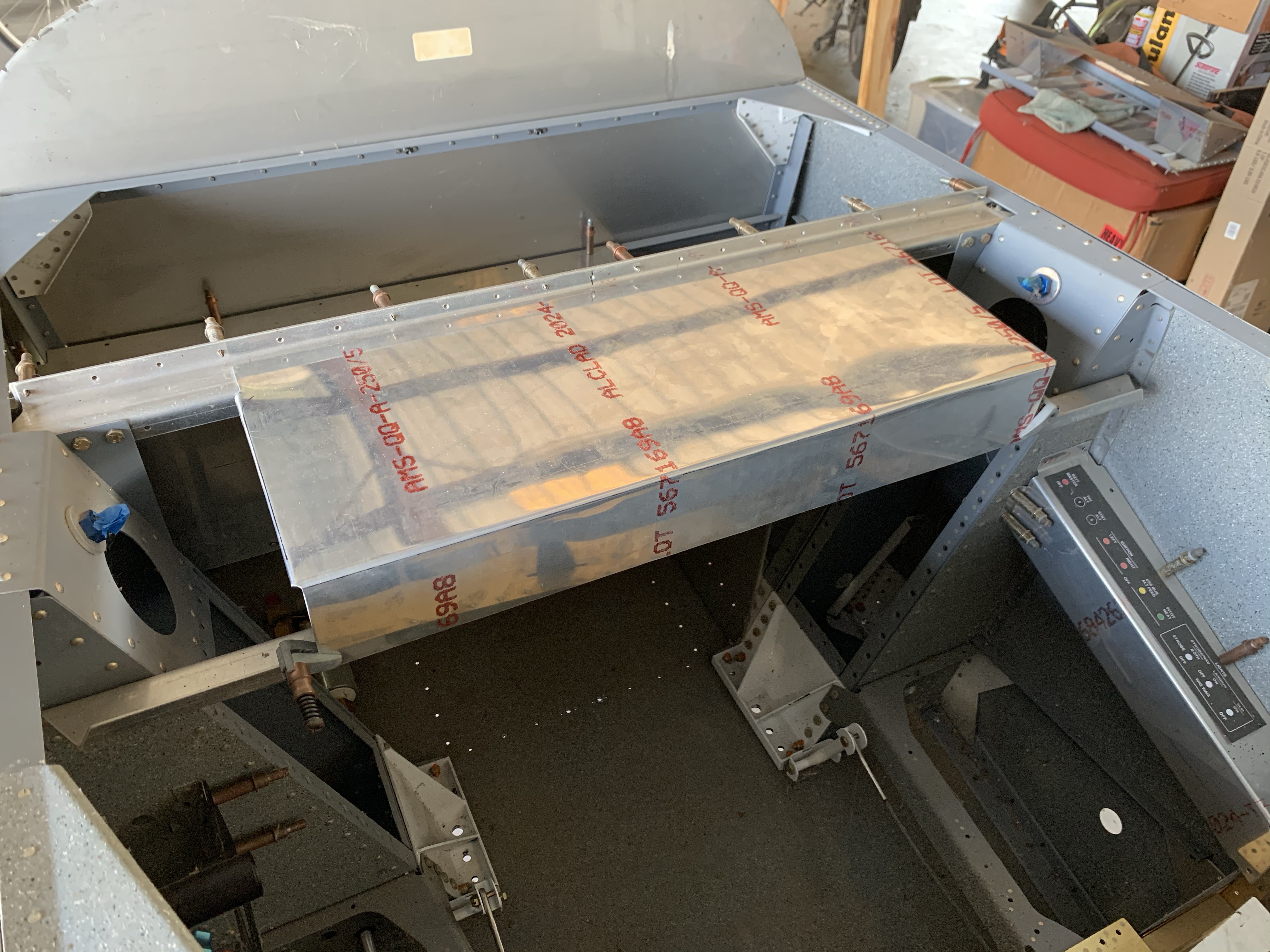 At this point I couldn’t resist trying a layout of my cardboard faux avionics boxes: 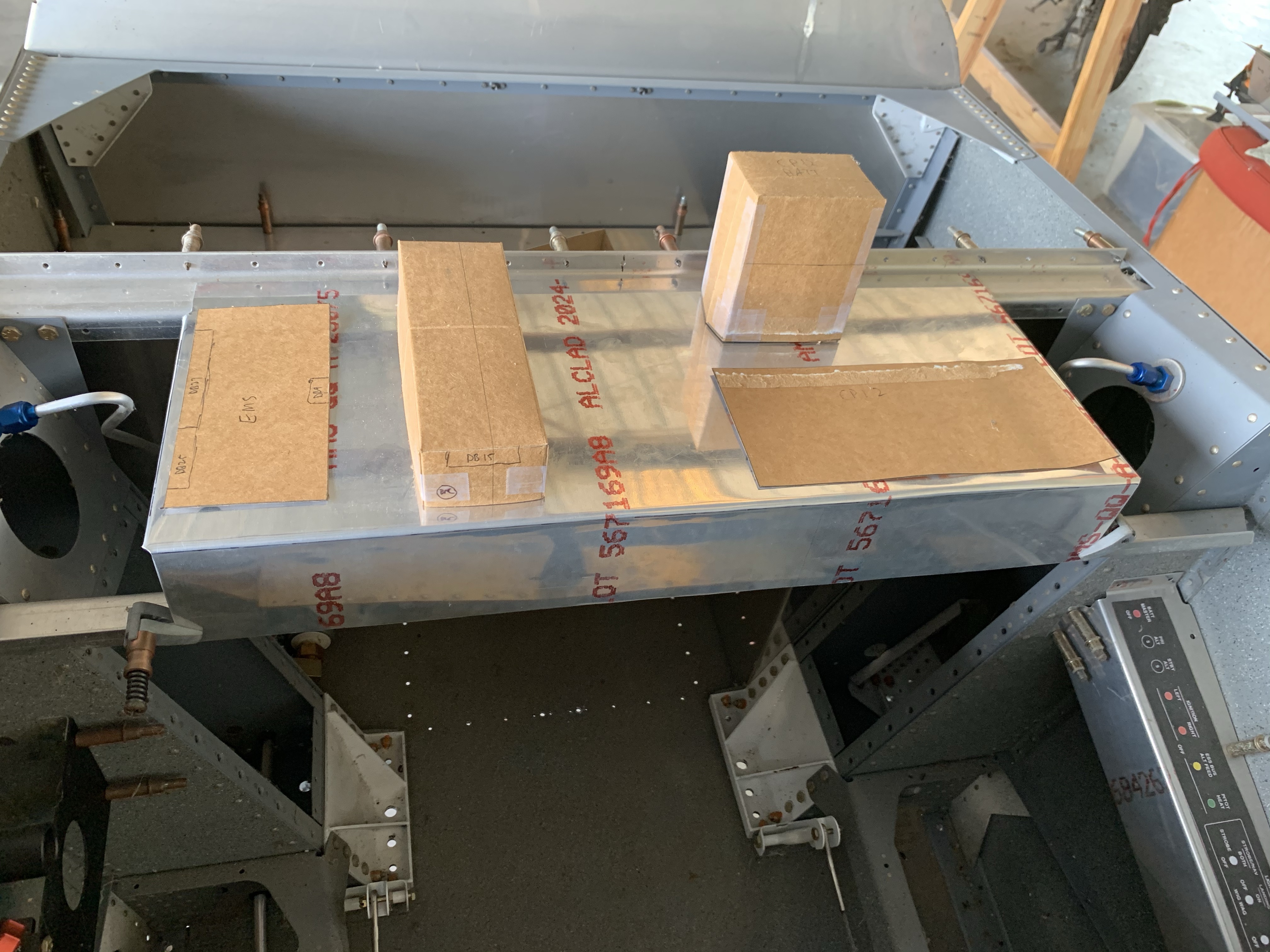 This led me to an interesting consideration: namely, packaging things around the brake lines coming out of the gear towers. I haven’t really thought of these at all while conceptualizing all the avionics stuff. My main concern was having the EMS connectors hang off the edge of the shelf and interfere, so I grabbed the brake lines and installed them. To review, these lines go from the top of the gear towers to a point on centerline, just under the baggage bulkhead.

This highlighted an issue with my lower shelf that I hadn’t considered. My original plan was to simply rivet a section of piano hinge to the baggage bulkhead and the shelf, allowing it to pivot down and forward and allow access to the fuses. But with these brake lines running beside the bulkhead, that means the lowered shelf will interfere with them. Possibly not a huge deal – this shelf isn’t intended to be accessed in flight – but I’m not sure I like the ides of the shelf potentially swinging down and hitting the lines repeatedly over the aircraft’s lifetime.

The routing of the lines is visible here. Note the Sharpie line on the bulkhead; that would be the location of the forward edge of the lower shelf: 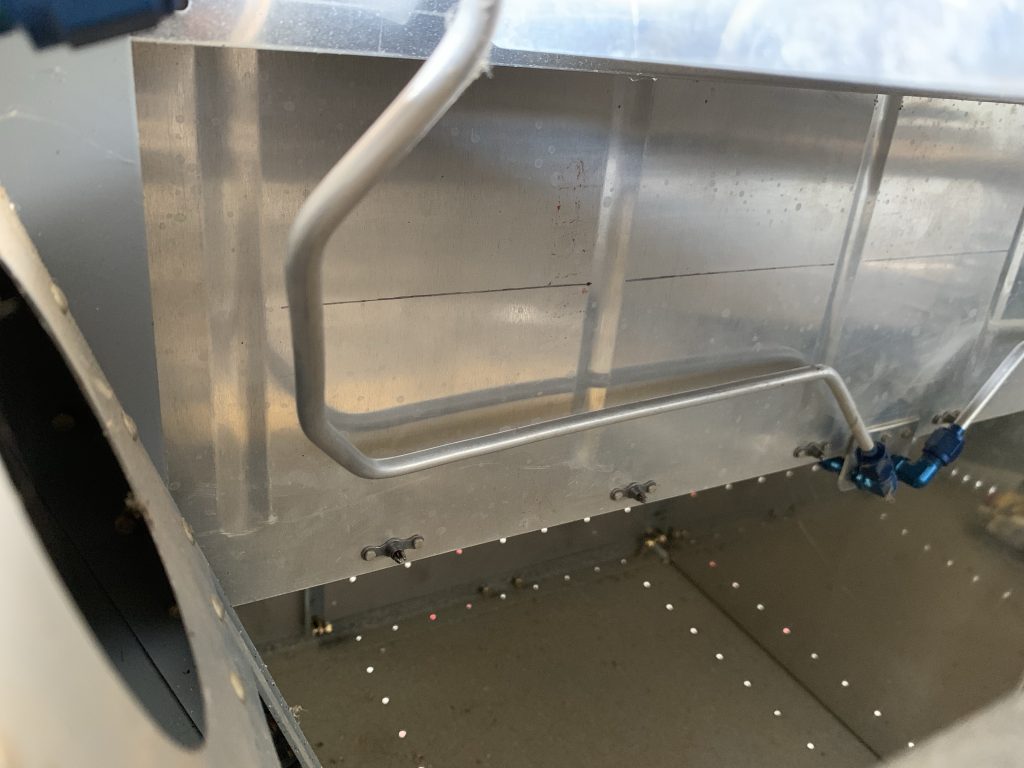 So yeah, I’m glad I didn’t go ahead and do the lower shelf and then discover this. It probably wouldn’t have been a huge deal – I’d probably just need to add some stops fo keep the shelf off the lines. I’ll probably still need to do that, no matter what I do, but at least I can plan for it instead of having to be reactionary. I’m thinking what I’ll do here is to rivet a length of angle to the bulkhead, and then rivet the piano hinge to that – that’ll offset the hinge point for the shelf by 3/4”. Combined with some sort of stop, that should make things work OK here.

Anyway, back to the upper shelf – I still need to lay out and make the attach holes on the braces, which will use screws and nutplates. I may wait on that until I get my avionics on hand – I’m a little concerned that my packaging designs from before might not work. One thing I didn’t account for was the mount points for boxes interfering with where the shelf overlaps the forward brace. I might end up having to do some creative stuff here, like mounting components vertically.

Oh, and I’ve got a bunch of tentative orders working right now. I need to get some quick-disconnect fasteners to hold up the aft end of the lower shelf – I think I’ll end up getting some quarter-turn captive screws from McMaster-Carr. I also spent way too much time looking at switches last night – I want to nail down an order for those this week, so I can have the switch panel(s) finalized before I get to building harnesses. And I guess I might go ahead and order my ELT from Spruce this week, and see about tacking on some assorted hardware since I’ll be getting free shipping.