Well…time to bite the bullet and drill some holes in my nice fuselage. I knew it was going to happen, but it still felt kind of wrong…

First up were the two comm antennas, and I started by preparing the doublers. I ordered four pieces of .040” sheet to use for these a while ago, and since then I’ve been thinking about how to form them. There seem to be lots of approaches to these doublers, ranging from people who just add a flat piece of sheet inside and call it done all the way to people who make joggles in the doubler so it can be riveted in assembly with nearby structure. Technically, the latter is best practice, but really kind of overkill for our (relatively) slow aircraft.

Anyway, my initial plan had been to make my doublers with flanges on all four sides, to maximize stiffness. But there’s one issue with that, and that’s dealing with skin curvature. Immediately behind the main spar where the comm antennas were going, the skin is flat laterally, but longitudinally it has a slight curve to it. Having a flange in line with that curve would make it tougher to get the doubler to conform properly. And realistically, both these locations are close to solid structure, so I eventually decided forward and aft flanges only would be fine. (this, by the way, is how Van’s supplies prefab doublers for RV-14 kits)

I also had to settled on the precise location for the comm antenna. Things were a bit tight here; first, there’s the location of the aileron pushrods just behind the spar, and then just behind those are the passenger footwells, which project down below the floor. So I needed to make sure I located the antenna center behind the pushrod region, but ahead of the low point of the footwells. I ended up making a cardboard template, which I used to trace the footwell profile on the outboard seat rib, and that let me lay out the fore-aft location.

Finally, there was the issue of drilling the three antenna mount holes correctly. The layout is pretty simple – three holes in a line, the center one 9/16” to accommodate the antenna connector, and the other two 3/16” to accommodate the mount studs. Spacing between the holes is 7/8”. I was a little concerned about marking and drilling all these holes freehand, so I decided to make a drill template instead.

The template just has three #40 holes, which I use to make pilot holes in the actual thing to be drilled, and then I can open those up to the proper size: 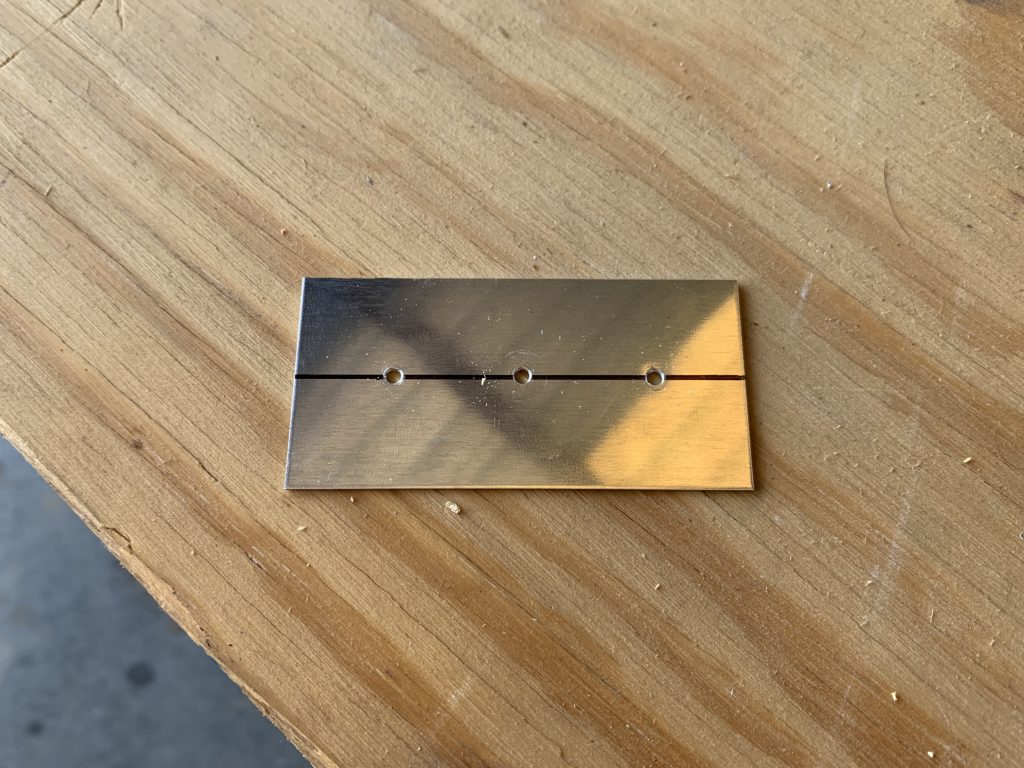 Next, I wanted to try the template our on a piece of scrap, to make sure it was correct before I put holes in something I couldn’t easily replace. Works like a charm: 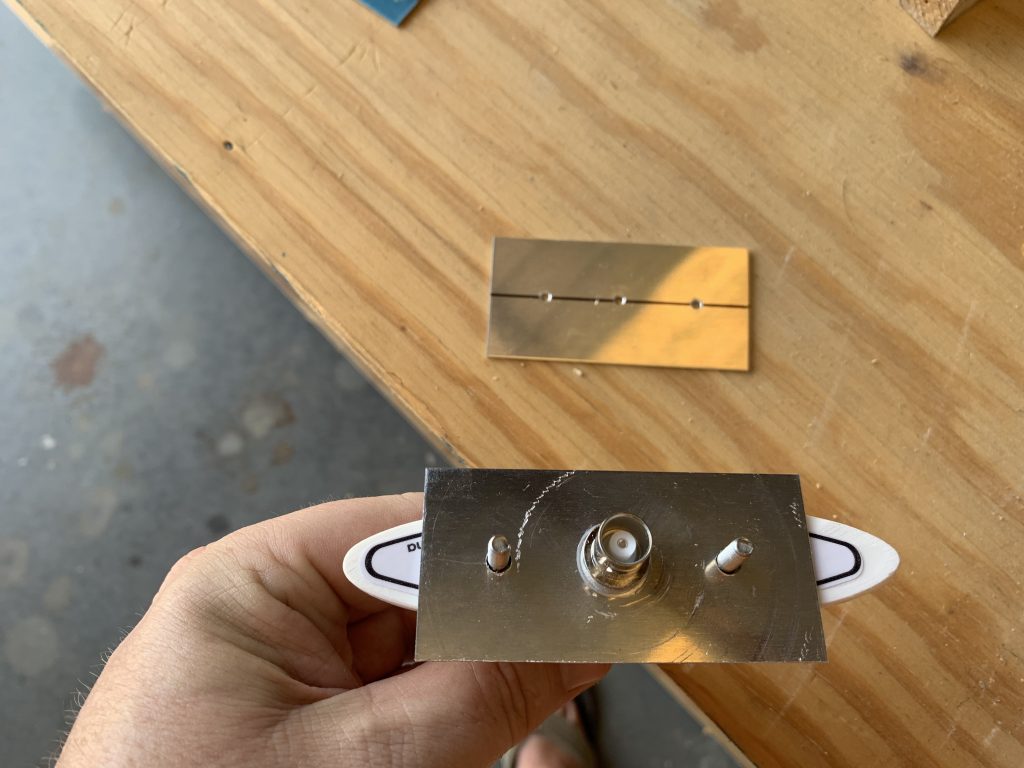 Then there was just a lot of drilling, positioning, clecoing, unclecoing, etc. In addition to the three antenna mount holes each doubler has a row of rivet hole around the perimeter, with which it will be permanently attached to the skin. But eventually I got it all done, and had my comm antenna locations done: 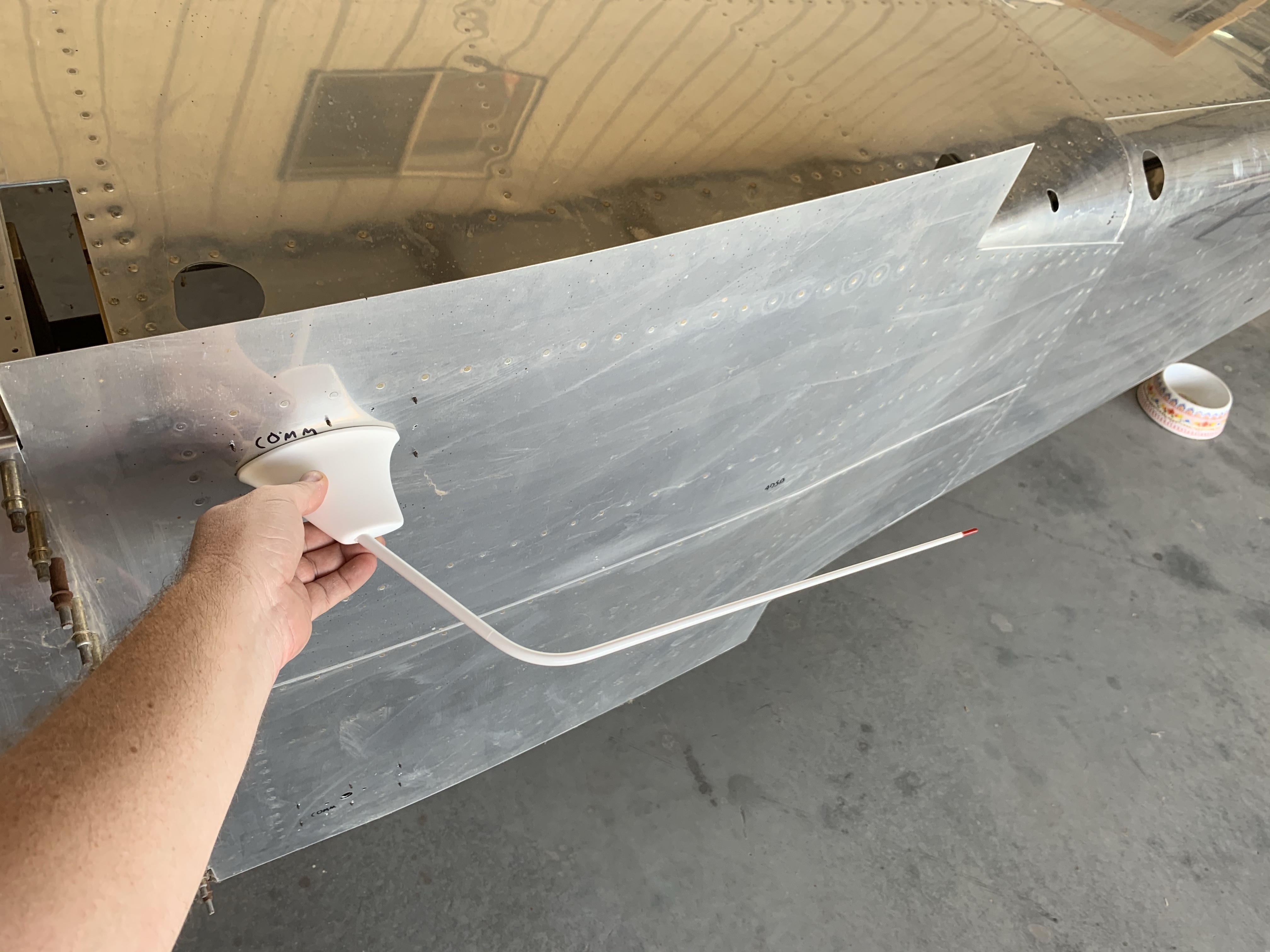 After that, I moved on to relating this process for the ADS-B antenna, just ahead of the rear spar carry through. I still have the transponder antenna, furthest aft, to deal with…for that, I want to do a bit of research first. My original plan was to put it basically adjacent to where the elevator bellcrank lives, but now I’m thinking that puts it below the avionics shelf, which may make routing the coax cable a little interesting. So I’m thinking of putting it just behind the bellcrank instead, but the potential issue there is that the skin isn’t nearly as well-supported there.

Additionally, the curvature issue I discussed before is reverse here – it’s straight longitudinally, but curved laterally. So optimally, I’d put the flanges on the sides – and that might actually be best here, since that’s the dimension in which the skin can flex the most. I still kind of think I’d want a lateral flange at the aft end, though, since it’s far away from a bulkhead and the skin’s pretty floppy.

So once again, it’s time to go look at what other people have done. Hopefully tomorrow I can get this last doubler done, and then…well, I guess I’ll set them aside, since I’ll need a helper to get them riveted. Probably wait until the same time I finally finish the forward bottom skin riveting for that.