So I find myself working with a new sort of challenge when it comes to productivity on this project: namely, the fact that there ought to be plenty of things to work on right now, but I keep having trouble actually doing stuff. I’m fixating on the tasks that I really want to be doing – for example, the pitot heat plumbing that I’ve been trying to get the right conduit for. Granted, the August heat here in Houston also isn’t especially motivating, but still…

Anyway, as of yesterday my order from Van’s still hadn’t come in. Also included in that order was some 0.040 sheet stock, which I’ll be using to fabricate doublers for my antennas, and which I’ll want on hand before drilling the mount holes for those. That’s both the thing I’ve been trying to do put on hold. I was hoping the Van’s stuff would be at the post office today, but I wanted something to work on this morning.

What I settled on were the upper bulkheads in the tail, which will support the aft upper skin. I was originally going to leave these until I was ready for that skin, but while looking at running conduit back to the tail, I saw that the predrilled conduit holes go through the overlap between the lower and upper bulkheads. Ergo, if I wanted to get that conduit installed for running the wiring back there, I was going to need the bulkheads permanently installed first. And hey, the bulkheads aren’t the access problem, the skin is…might as well get going.

So I first spent about two hours deburring these things. Lots of nooks and crannies tom give attention to, lots of time with a needle file. This is often tedious, but today it felt good to be doing something (and I don’t just mean sweating). Next up were the harness fairleads – these reinforce the slots in the forward most bulkhead where the harness shoulder straps will pass through. These are thick aluminum stock and thus need some vixen file attention before going to the scotchbrite wheel. To be honest, I’m still not super satisfied with the smoothness, especially inside the slots. I think I’ll end up doing some more work on those with sandpaper or something.

Next, the fairleads were clecoed into place and the rivet holes match-drilled, then all the bulkheads got checked in place to the fuselage, and the rivet holes joining them to the lower bulkheads were match-drilled as well. The last thing I did before calling it a (sweaty) night was to add the gussets behind the forward bulkhead. Presumably these are to keep these from distorting, since they’ll potentially have a passenger leaning back against them. Only the bulkhead has prepunched holes for the gusset, and not the longeron – I guess I’ll get to drill those in assembly at some point. Interestingly, as I read forward in the instructions, it never actually says to do that, as far as I can see…

Anyway, here’s the fuselage with upper bulkheads in place: 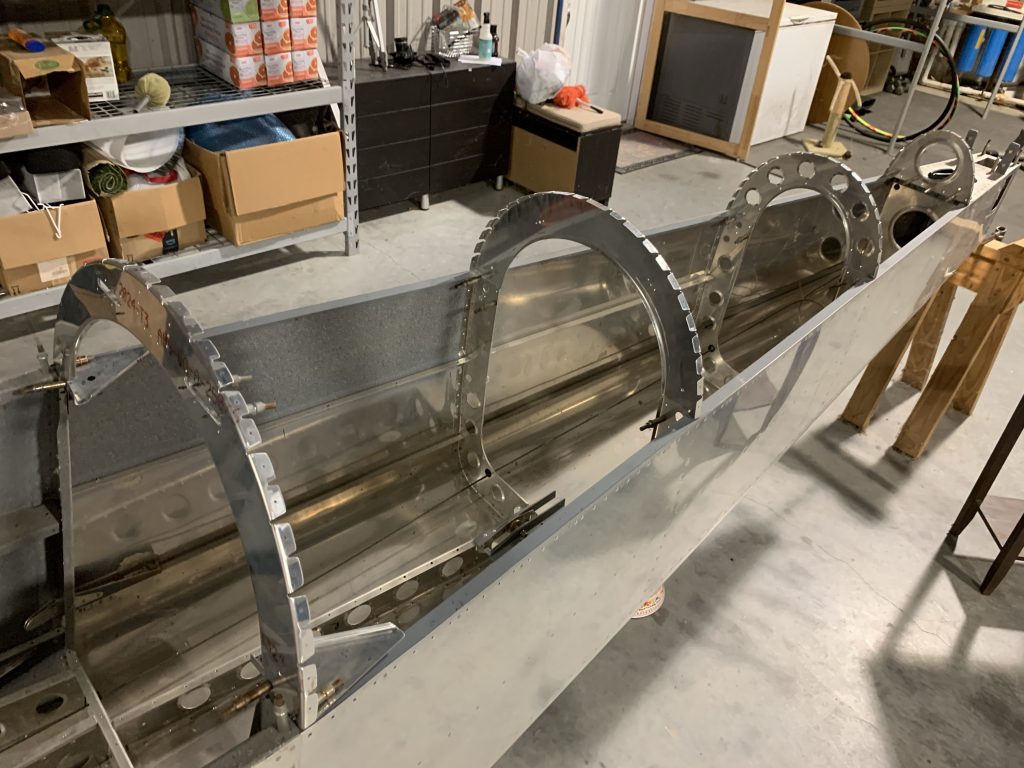 Next up I get to add the canopy rail receptacle (at the top of the forward bulkhead) – this is what the aft end of the canopy will drop into when closed. Then I get to add the aft upper skin and other stuff and do a bunch of match drilling. At this point I’m thinking that I’ll get all the fitment tasks for the upper skin done, so I’m just short of riveting it, then I can put it aside until that time comes. Between that and other minor stuff, I should be able to keep busy until the end of the month, when I expect to – gasp – place my avionics order.

I got a quote from SteinAir this week, and I think it’s about time. All the mockup work I’ve done with cardboard cutouts of avionics boxes is all well and good, but I want the real things in place before I start actually making shelves and figuring out wire runs. I just can’t get comfortable with doing that stuff based only on cutouts, regardless of how correct they might be.