Well, not a ton done today or over the past week, though I did get to do some flying today (and also eat out for about the second time since March). I was able to spend a little more time looking at pitot tube position planning.

Last time we “talked,” so to speak, I was strongly considering mounting the pitot tube out by the wingtip. I did ask for opinions on VAF, and while nobody told me my idea was completely stupid, there was a somewhat general consensus of “but why?” I was approaching the question more from a “why not?” perspective, so I didn’t find this convincing.

However, the one obstacle to my planned location was figuring out how to tie the mount into the rib. The base of the mount rivets to the skin and spar, but it also requires bracing to the rib, to resist what I assume is a torsional load on the mount base, caused by drag on the pitot tube way out in the wind. Dynon provides a small piece of angle aluminum for this, but this presumes that the mount is stalled adjacent to the non-flanged side of a rib. My planned location was on the flange side, which would require me to get creative with this reinforcement.

But then I hit on a simple solution – still keep the mount at the second-most-outboard rib, but on the inboard side – then I could reinforce it as per normal. The only concern would be whether I could bend the pitot lines in such a way as to feed them through the tube and then through the immediately-adjacent lightening hole. Figuring this out required a practical exercise, and my initial plan had been to just go ahead and bend the pitot lines and experiment in real-time, shall we say.

But here’s the problem with that: those lines can be bent only once. So what if I bent them and eventually found my chosen location was no good? And then what if that bend was problematic for any alternatives? Clearly committing to the bend was not smart. I needed some sort of analog with which to test.

I spent some time poking around. Maybe some leftover fuel vent line? Huh, apparently I didn’t have any leftover. I have plenty of extra fuel line, but that’s twice the diameter of the pitot lines, and I’ll probably need more of it for fuel-system stuff down the road. Then the perfect thing occurred to me: the pile of Romex wire on a random shelf. The entire bundle is just about the same size as the pair of pitot/AoA lines. So I chopped off a piece the same length as the lines, and went to work.

The good news was that it was easy to figure out a bend that allowed for threading the lines through the mount, into the rib lightening hole, and out towards the wing tip. The bad news was that the lines only reached about halfway through the bay between those ribs. This would give me a new problem of needing to put some sort of support piece in the middle of the bay to support the ends of the lines, but the only thing to attach to would be the spar. Drilling a couple holes in it might not be the end of the world, but maybe still not a great idea.

That was pretty much the end of the wingtip idea. At this point much of the potential access benefits weren’t going to materialize, and there’d be significant mental energy in making this setup work at all.

This left two basic choices: either just outboard or just inboard of the aileron bellcrank bay. As mentioned before, the outboard location poses the possibility of interference with tie downs, but it’s also more difficult to access through an inspection cover, and also makes the bellcrank bay more crowded. So after lots more clamping the mount in various places and futzing with that poor abused piece of Romex, I settled on one bay inboard of the bellcrank.

So hey, let’s see some pictures. First, here’s that Romex, bent as appropriate to go through the mount. That 90° bend has to be pretty gradual to make it through the fairly-long mount: 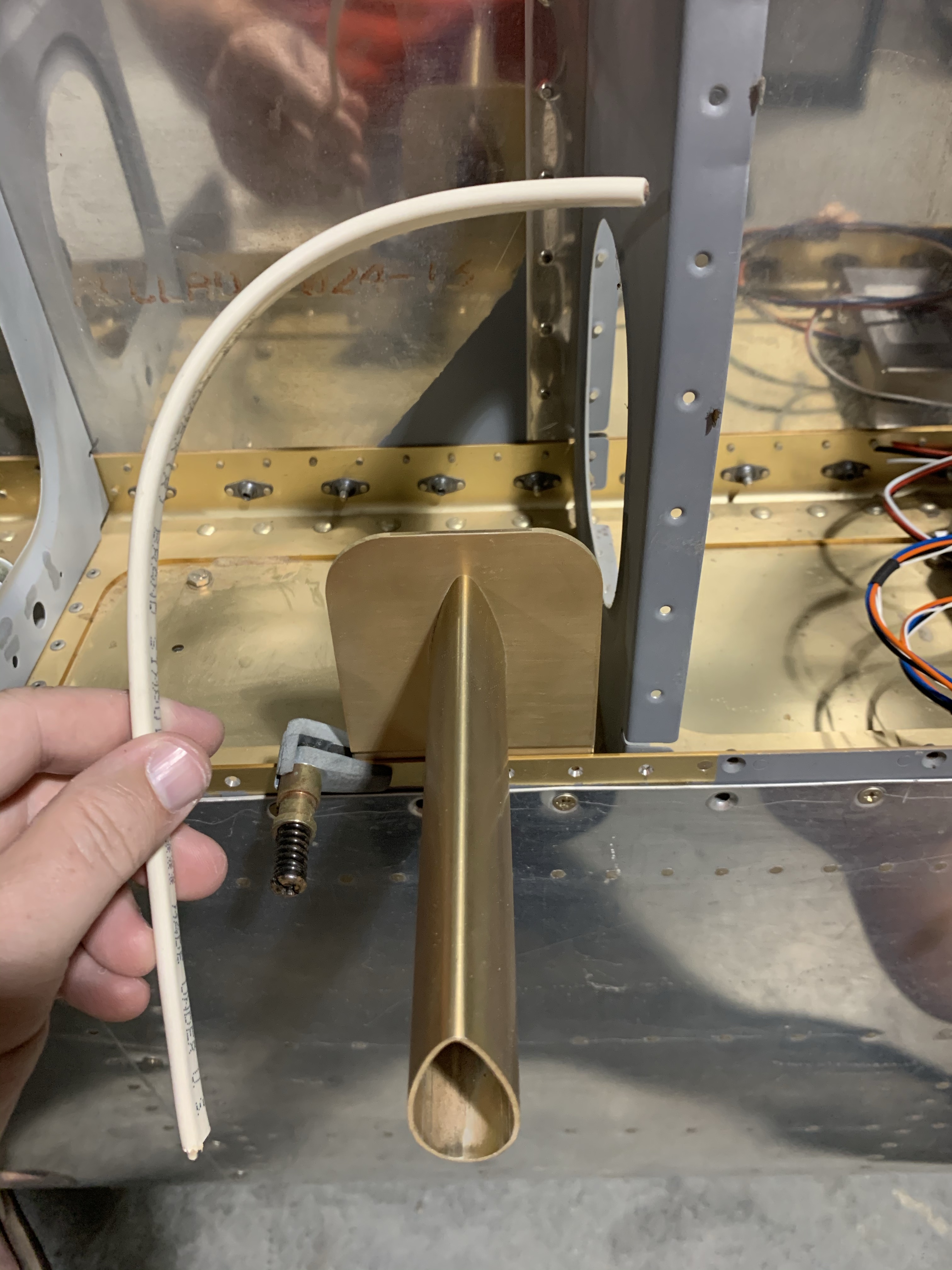 And here’s a look at what the intended mount location looks like with he fake-bent tubes in place. On the other side of that rib from the mount is an inspection cover, so there will be good access here. The tubes can make a nice 90° bend through the lightening hole, and a piece of angle can be mounted to the rib to support both the tubes and the wiring from the controller. The controller will likely be mounted on the inboard side of that same rib, again easily accessible through the cover. 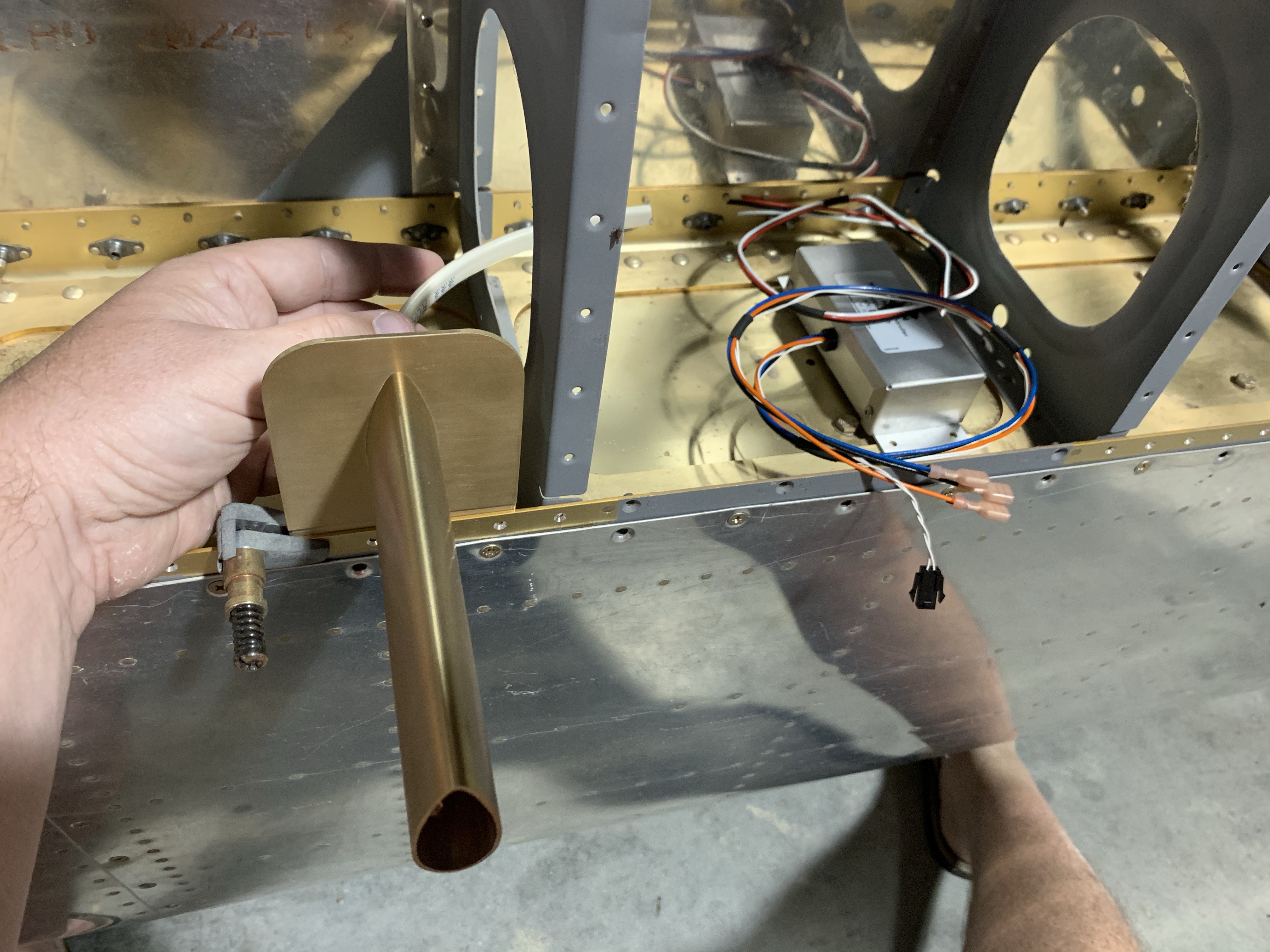 Overall, I think this will be just as accessible as my wingtip location, and significantly less complicated to implement. The nylon lines into the fuselage will be shorter, and can just run along the spar instead of through the conduit as I’d originally envisioned, which will make the conduit less crowded. And since this is all inboard of the bellcrank, I don’t have to worry about routing around that.

Although, as I type this, it occurs to be that the aileron push tube from the fuselage will go through that same hole I’m considering here…creating a potential interference. So I guess tomorrow I need to temporarily connect the tube to the bellcrank and get an idea where it’ll sit in here. That might be a dealbreaker, we’ll see. Maybe I’ll end up outboard of the bellcrank bay after all.

Welcome to the world of systems planning. Everything seems to affect everything.