Well, today was one of those days spent almost entirely on chin-scratching. It didn’t start off that way, but that’s just because there was some more cleanup work to be done. I didn’t get around to vacuuming up all the mud dauber debris yesterday, so I did that this morning, then worked on removing some of the highly annoying artillery fungus reside on the inboard spar ends. From my research, this stuff isn’t corrosive, but at least I can remove the highly visible stuff.

From there, it was time to consider what to work on first, and after rolling this around for a bit, I decided to look at the pitot mount in the left wing. This started with a bunch of VAF reading. The factory-recommended location for the pitot is in the same bay as the aileron bell crank, but that’s also assuming you’re doing the basic pitot tube – literally just a piece of tubing that sticks out of the bottom of the wing. Installing a more complex pitot, especially a heated AoA tube like mine, is quite a bit more complex. Instead of just one line, I have two, not to mention the wiring for the pitot heat controller.

Plenty of people have adopted other locations, generally moving to an adjacent bay, either inboard or outboard. Which direction is kind of hotly debated; some thing going inboard might get too close to the prop wash, others think moving outboard makes it likely for tie downs on the ramp to interfere with the tube. There’s the additional consideration that moving the mount puts the pitot further away from any of the access covers, potentially making maintenance more annoying.

Now, all that stuff I’ve read before, but I ran across a different idea entirely today – that of putting the tube way out near the wingtip. At least one person has done this and reports no issues, and others seem to think that it should be a fine location. It’s worth noting that this is where the pitot is located on some Grumman light aircraft. I really like this idea, for a couple reasons. First, it makes maintenance access super easy. Instead of working through a small access cover, one could just remove the wingtip and have good access through the rib lightening holes. Second, there’s no concern about routing wires and tubing in the vicinity of critical control systems (the aforementioned aileron bellcrank bay).

I haven’t decided for sure to go with this, but I did spend a whole lot of time looking at the pitot mount clamped in various locations in the spar. Assuming I do go with the far outboard location, I think I’ll end up positioning the mount beside the next-to-last outboard rib, like this: 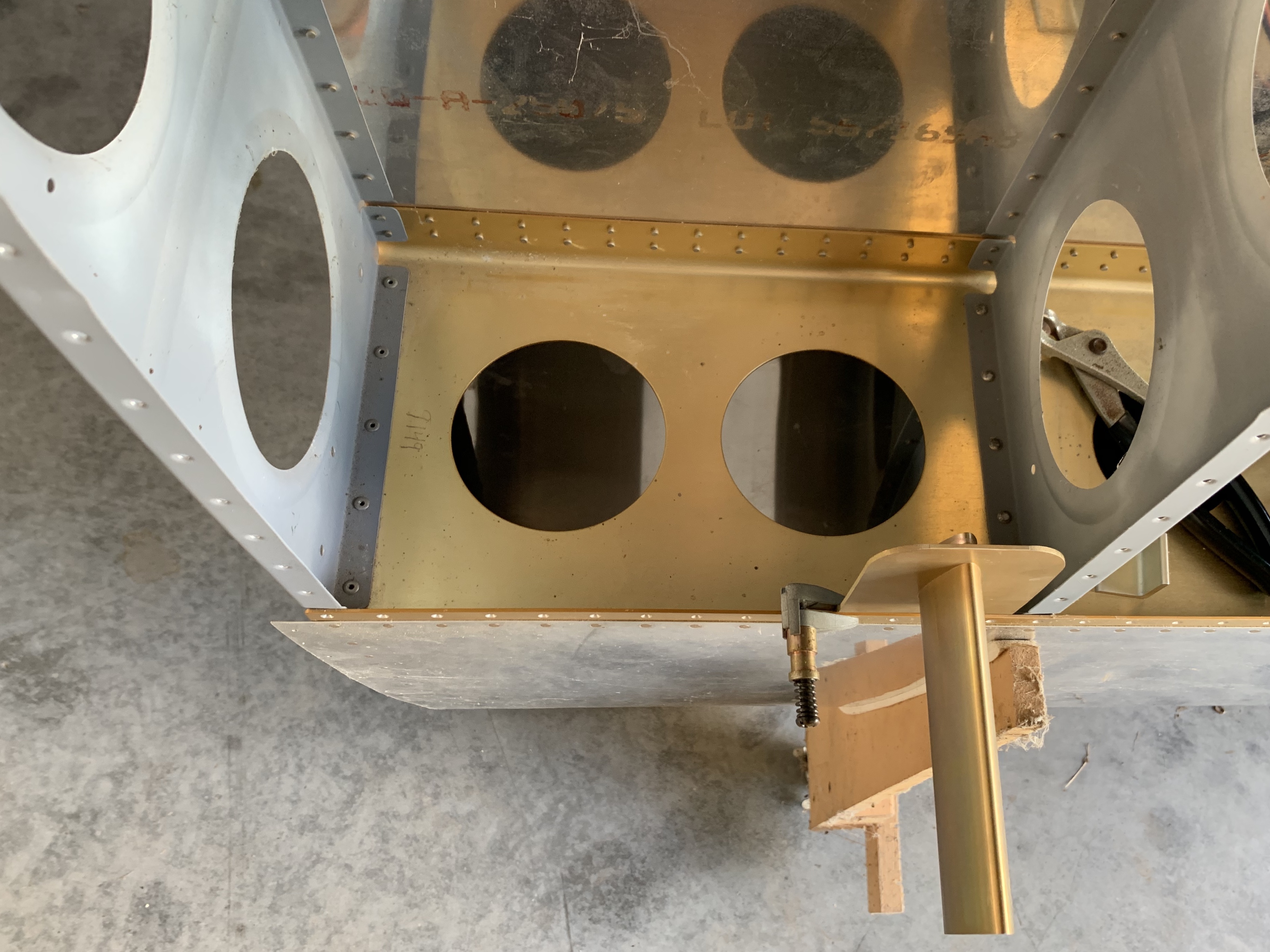 The pitot tube itself, which fits into that mount, includes two soft aluminum lines, which will connect to the nylon lines that will route the pitot and AoA signals into the cabin. There must be a minimum amount of the aluminum lines left; since this is a heated pitot, there’s the concern of that heat damaging the nylon lines. My loose plan, in this case, would be to bend those lines toward the wingtip, and install a piece of angle in the rib lightening hole near the spar. Here, adel clamps would provide security and strain relief for both the line and electrical connectors. The pitot heat controller could simply be mounted on the outboard side of that outboard rib.

Will I do this? Yeah, still not sure. I need to check in on VAF, where I posed this question and I’m sure I’ll hear some reasons why this is a horrible idea. It remains to be seen if anyone has a convincing argument. Normally “follow the plans” is pretty good on its own merits, as a way to avoid additional work, but since fitting the pitot tube is essentially a from-scratch operation in any case, there’s no additional work associated with picking this different location.

So we’ll see. If I do settle on this spot, I’ll probably go ahead and bend the aluminum lines on the tube so I can get a more practical (ie less imaginary) look at packaging, and work more towards nailing that down.