Time to get back at it. Tonight I decided to see about getting the rudder hung, preparatory to setting up the proper travel.

First oder of business, dating back to when I fitted the rudder stop a while ago, was relieving the center of the stop to allow for the rod-end hinge point to move freely, since I’m mounting the stop in between the hinge brackets. To get started, I removed the lower rod end from the rudder (and wrapped tape around the shaft to make sure the stop nut didn’t move and I could put it right back in the position I removed it).

At first I was thinking of making a cardboard template, tracing the rod end’s outline, and then using that against the stop, but then I realized there was a much simpler solution. I used a couple long bolts to put the stop in place on top of the upper bracket, and another long bolt to align the rod end with its pivot point. Then I just used a Sharpie to trace the outline of the rod end: 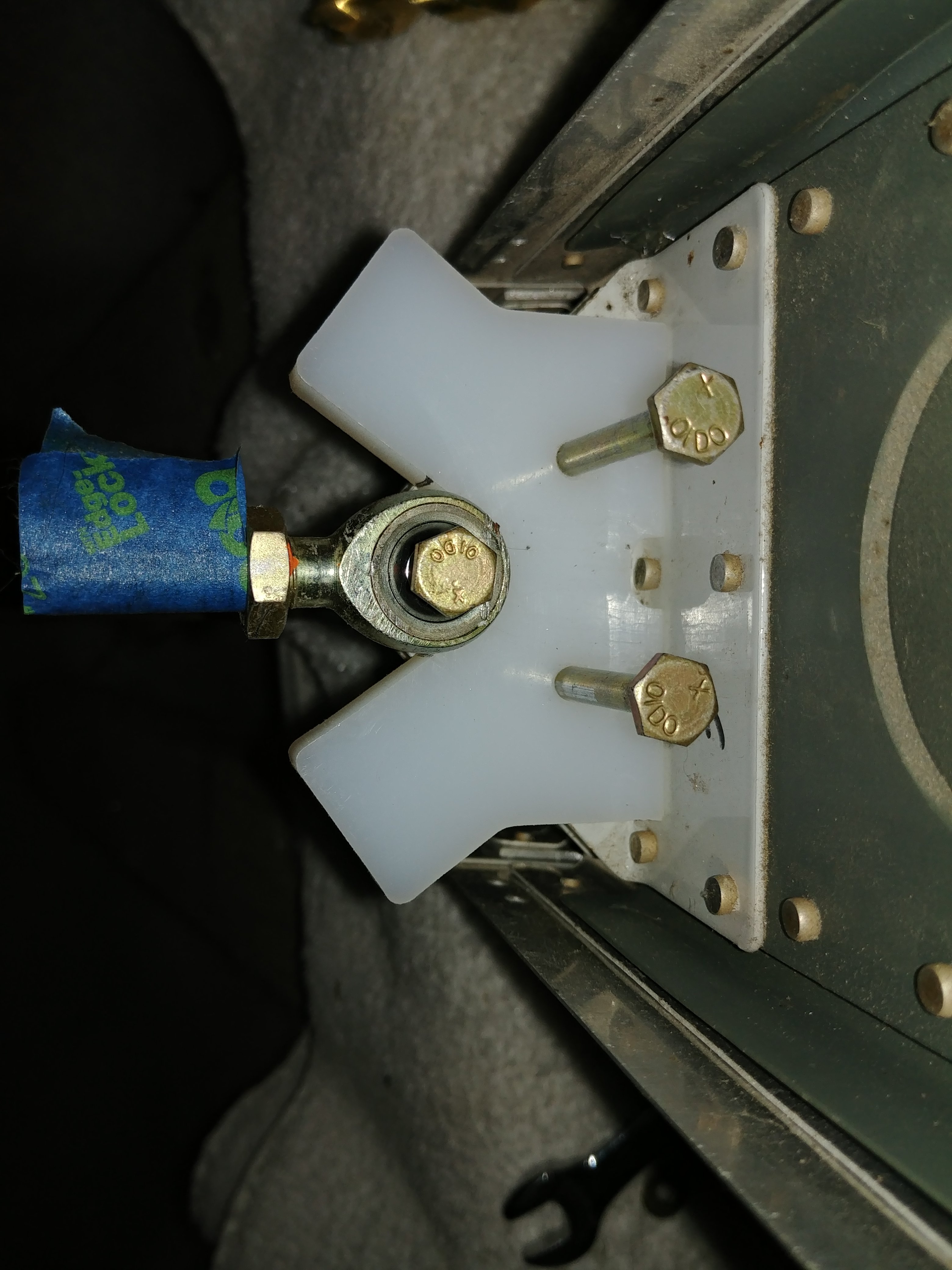 Then I just went to town on the stop with a sanding drum on the dremel. I was surprised how little material I had to remove. I saw someone else’s build log who’d done the same thing, and they’d marked off a pretty large area to remove. It only took a couple trial-and-error iterations to get the clearance I needed. Kind of hard to tell, but in this photo the rod end is sitting inside the stop’s pocket where it was above in the previous one: 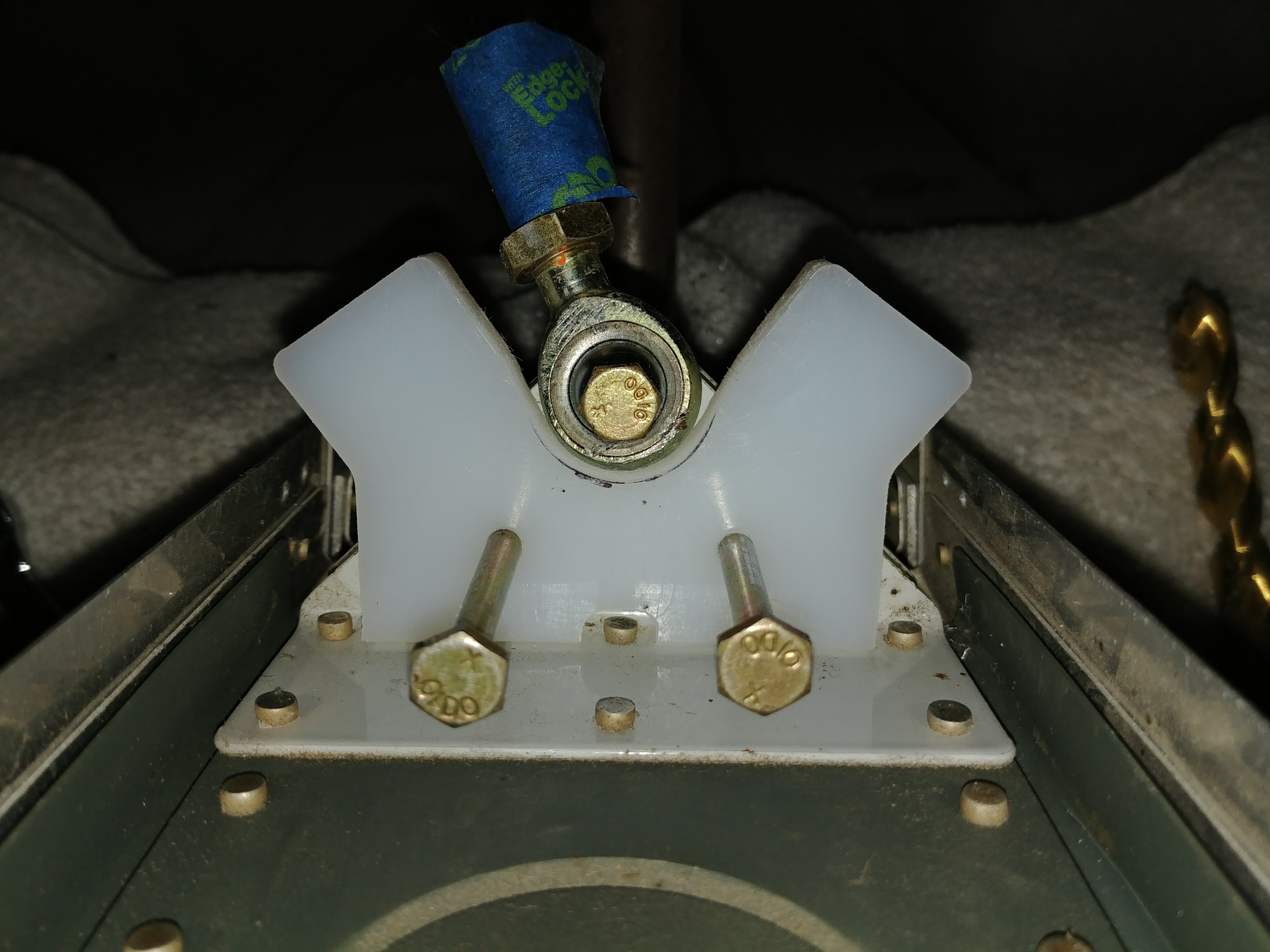 This ended up being a bit more of an operation than I expected. Way back when I first did the empennage, I adjusted the rod ends for proper alignment when mounted to the vertical stab, so I expected to have the rudder just fit nicely, but…wrong. When I installed it the first time, I lined up the upper hinge, then the center one, and…the lower one was nowhere near being aligned with the brackets. Best I can figure is that as built, the stab spar had a bit of a bend in it, which was remedied when I fitted it to the fuse and ensured alignment.

Since I used a taut string to align the brackets, I figured I’d use the same approach to getting the rod ends aligned. But there was also the question…which of the three rod ends should I adjust? Upon inspection, the center one was clearly far further out than the others, so I decided to move it in. I also used the measurement from the spar to the rod end centers as a baseline for alignment.

This ended up requiring a couple of iterations as well to get right. The first attempt after checking with the string, the center rod end was actually too far in, so I got to remove the rudder again, thread it out a bit, and try again. Fortunately, that time everything lined up, and I got the bolts dropped in. So now I’ve got a rudder in place: 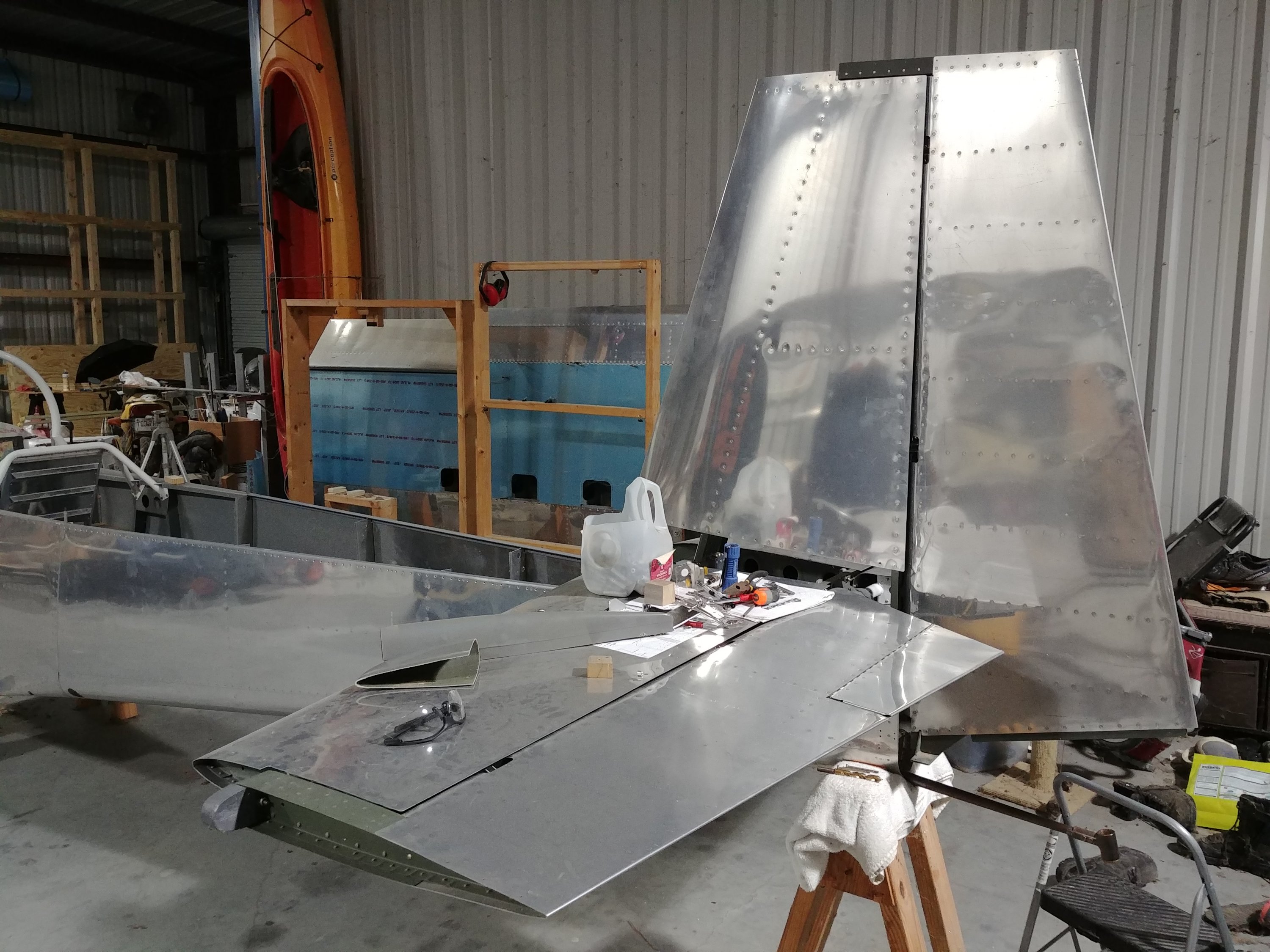 Next up will be setting the travel. At the moment, the stops clearly need a fair bit of material removed, there’s way too little travel. Before I can set this properly, though, I’ll have to work out a method for measuring the rudder angle. This was easy to do with the elevators, since a digital level could show angular displacement, but that won’t work for this. I suspect I’ll end up making a sort of manual protractor drawn on the floor, using a plumb bob on the rudder to track the travel. That’s for another night, though…