The holidays are over! Which normally isn’t something people say in a joyous tone, but in this case it means I can start getting back into the swing of things. I spent most of today working on building some new shelves for the hangar, but set aside some time in the evening to at least touch the airplane a bit.

In the time since my last post, my internal rudder stop piece came in, which gave me the chance to plan for its install. At a glance, it’s pretty simple – the stop piece has two AN3 bolt holes, and it just needs to be positioned on the rudder hinge bracket and matching holes for the bolts need to be drilled there. The catch is that simply using the stop – which is made of nylon – as a drill template could easily result in its holes getting enlarged. The instructions called for just marking and drilling holes, but I don’t really trust the accuracy of that method.

So I came up with an alternate plan: to fab up a drill bushing that would fit tightly in the bolt hole. This way, I could drill a smaller pilot hole using the stop as a template, then enlarge the holes to #12. I couple days ago, I took the stop with me to work, and stopped at Ace on the way home and went to scavenging. I was hoping for a small aluminum or steel spacer piece, but they didn’t have any small enough – the smallest were 1/4” OD, and I needed 3/16”. The tubing section, though, bore fruit, and I ended up buying a 12” piece of 3/16” OD stainless tubing.

Tonight, I took that piece of tubing and cut off exactly half an inch of it, then slowly ground down the bushing until it just slipped between the upper and lower hinge brackets. The stop can either be installed on top of the upper hinge, or between both hinges. I elected for the latter; it should be a bit sturdier, and it also positions the stop a bit closer to the control horns. I care about this because one of the criticisms of this piece is that if the pilot pushes hard on the pedals at the stops, it induces the spar to twist a bit. This is a problem that can be mostly solved by pilot skill, but mitigating it by reducing the distance between the two points of force application seems like a good belt & suspenders approach.

Anyway, with the bushing cut to length, I reamed it out to #30 (it was pretty close already), and then it was time to get going. Basically, the procedure was to clamp the stop on top of the upper bracket, drill one #30 pilot hole, then clamp the stop between the brackets and drill through the bushing and make the matching pilot hole in the lower bracket, Then the stop came out, those two holes were drilled out to #12, and then the stop was clamped on the upper bracket again, this time with a long bolt through the drilled hole to ensure position. Then the procedure was repeated with the other hole.

Here’s the stop clamped in place, ready to drill the first pilot hole. The bushing is visible on the left: 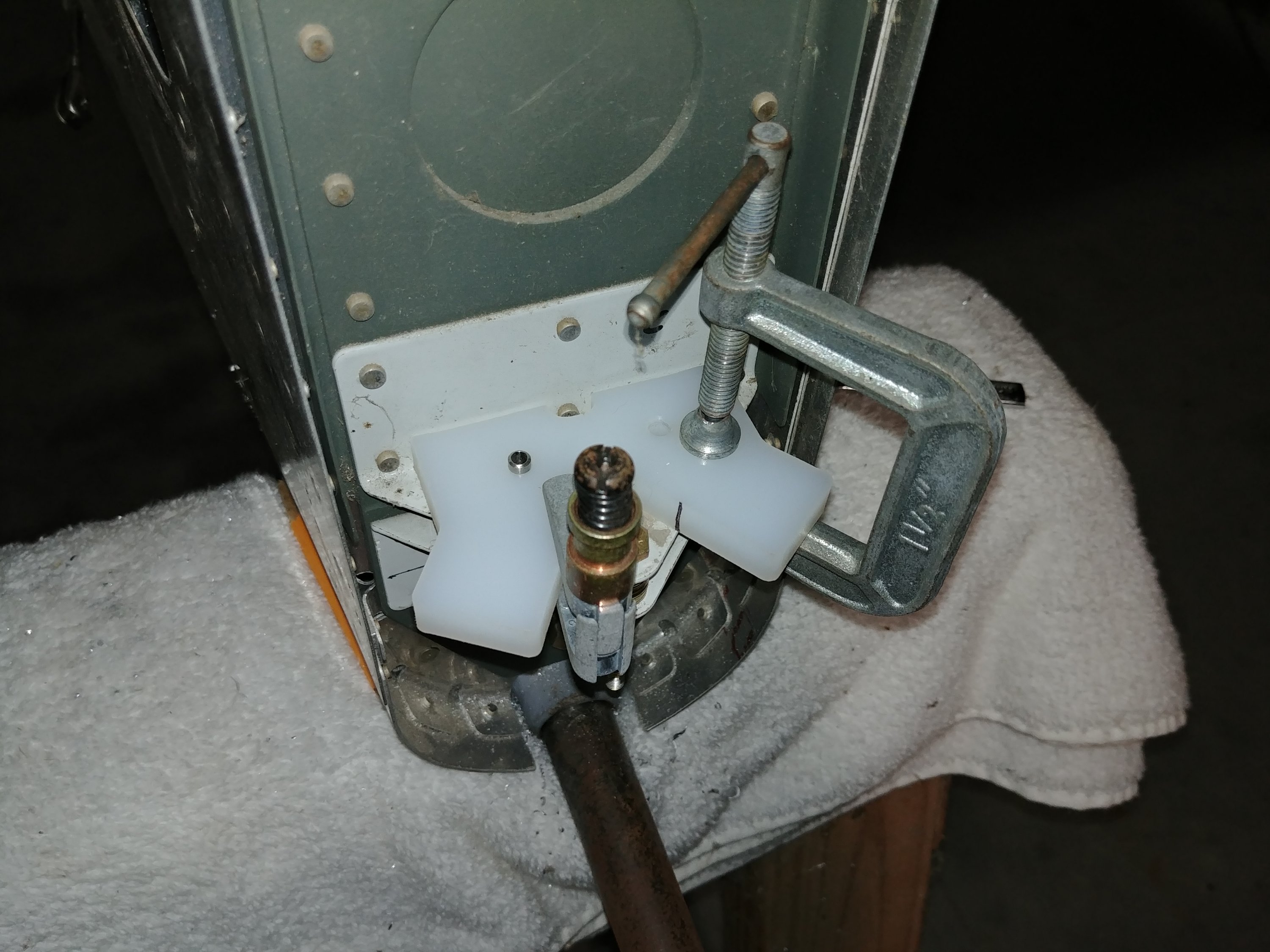 Then clamped on top again, with a bolt through the first hole: 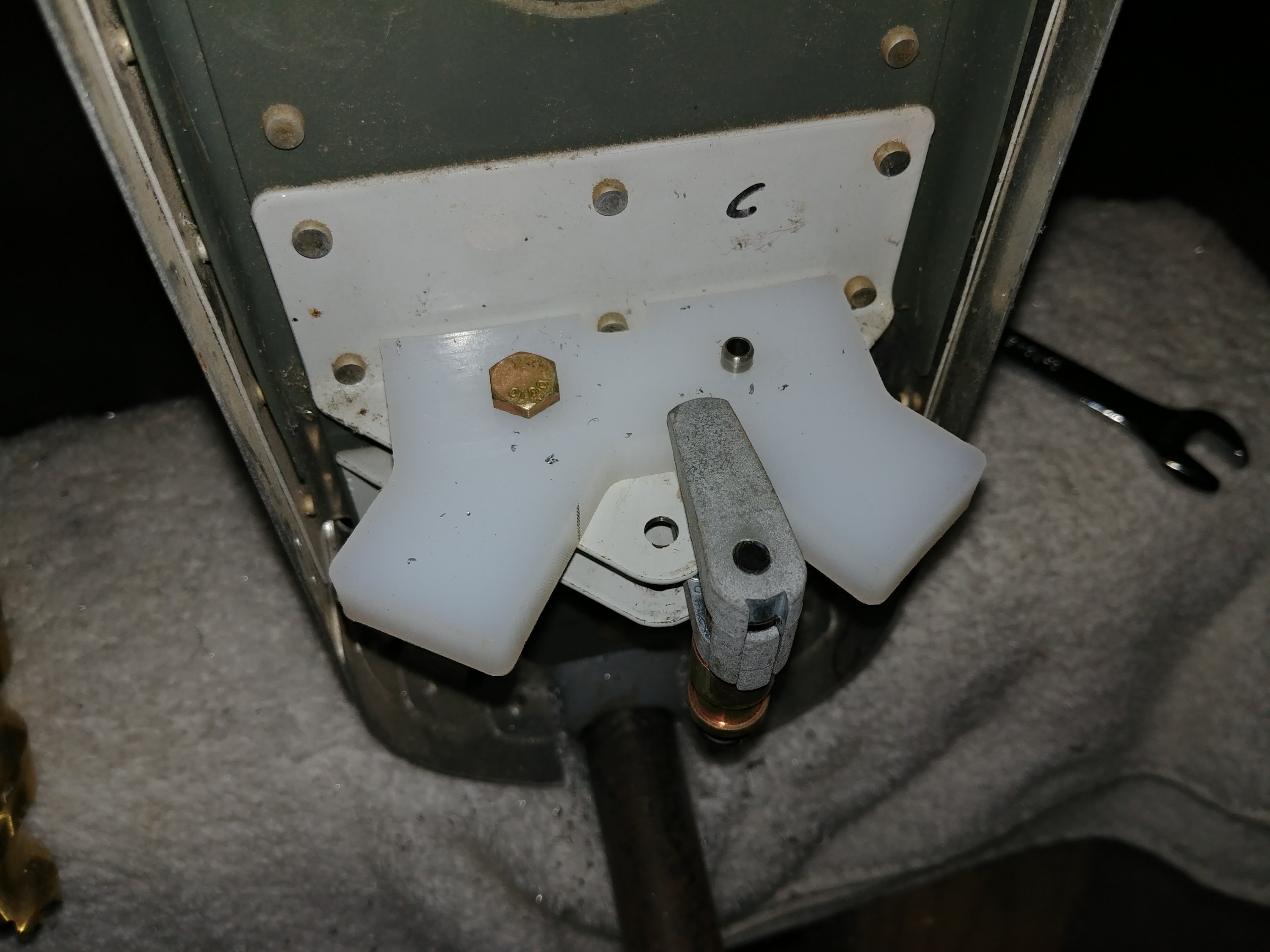 And finally, positioned between the brackets, with both bolts in place: 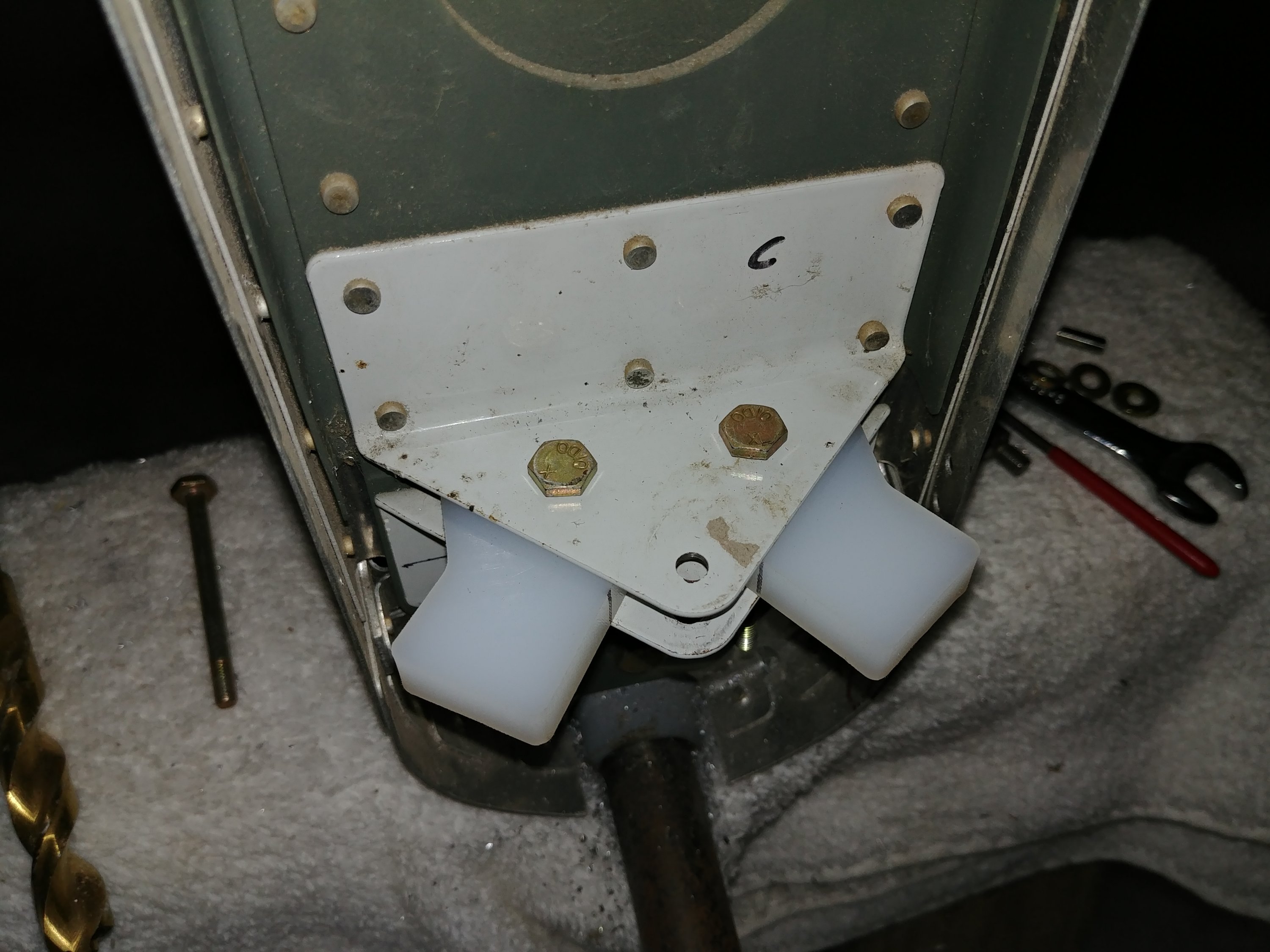 I still need to figure out the proper washer stickup to put on the bolts between the brackets. The stop isn’t thick enough to fill the gap, hence the need for the washers. I have a pretty good idea, but to get it absolutely right, I’ll need to clamp a 1/2” spacer in the bracket hole for the rod end. I think I’ll probably have to relieve the stop itself for clearance around the rod end, since I chose to put it between the brackets. Hopefully I have a spare rod end around, otherwise I’ll have to remove the one from the rudder (not a huge deal really, but it means I potentially lose my careful length adjustment).

In other news, the past two weeks haven’t been wasted. I used the ample downtime away from home to put a lot of time into refining my electrical system plan and panel layout. I think I’m pretty close to a panel layout that I’m happy with, after soliciting and integrating some feedback from folks on VAF. I need to mock up my latest design in the plane and do some chair-flying to verify that I like the folks, but from just looking at it and thinking through procedures, I think it’s pretty solid.

Here’s the current working layout (click for a full-size image). This depicts both the panel itself and the right-side console, since the latter will be housing some things that I don’t think need to be in the prime main panel space:

About the only thing I’m not 100% on here is having the intercom on the right console. The faceplate fits fine, but the unit itself would stick out past the bottom of the console, unless I build a custom one (which I don’t really want to do). I’m not sure if I’m OK with that idea or not. I played with an alternative this morning a bit, and found that I can fit the intercom on the far right below the SDS CPI2 electronic ignition controller. Gotta think on that one a bit more.

Other than that, there are some small items that are still missing, but nothing major. I’m hoping to nail this down in the next month and maybe even (gasp) order some avionics…