After attending the usual Sunday morning coffee club meeting here at Sport Flyers, and then enjoying some lunch, I got right back to work on getting the stab fitted. When we left off yesterday, I’d done the initial setup of the strings I’d use to properly position the stab. However, after thinking about the setup overnight, I decided to do some fine-tuning.

First, for the string going through the rudder hinge brackets, instead of having it hang on a plumb bob, I instead pulled the slack out and just let it be stretched between the top and bottom brackets. Using the plumb bob is good for checking true vertical, but I don’t need that – I just need to be sure the brackets are in a straight line. So stretching the string is actually better for that.

Second, for the longitudinal strings, last night I’d tried just tying the ends of the string to checks in the forward upper brace. The thing there is that the string isn’t necessarily perfectly positioned on the rivet holes, since it could come off the cleco on either side. Also, it was difficult to pull the string taut and get it clecoed, and I wanted some good tension on the strings. So I tied up two short loops of string, each one attached to a split ring, and hung one on each cleco. Then I tied my actual one string to one split ring, and tied a trucker hitch on the other one, which let me get some good, solid tension on the whole setup. 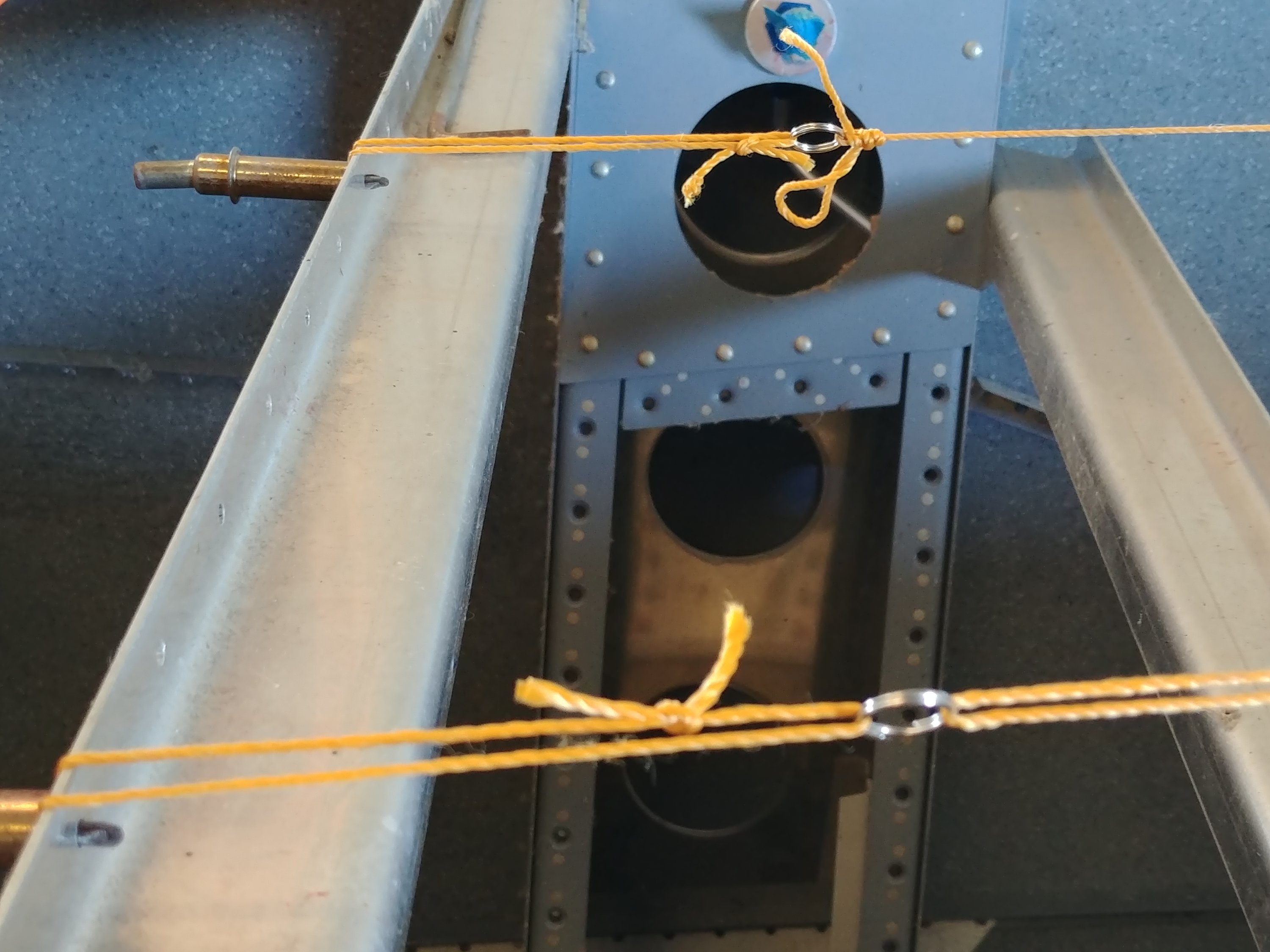 That meant it was time to start doing the actual alignment. The basic idea here is that the forward spar is clamped to the joint plate to the h-stab, and that interface can be moved laterally to fix the longitudinal alignment, and vertically to get the hinge brackets in alignment. But there’s a problem here – in addition to the joint plate (which is clecoed to the h-stab) and the rudder spar, there’s also a spacer between the two. And that spacer needs to be carefully aligned with the joint place. Well, this gets fun, because as you move the rudder spar around to get alignment going, the spacer moves around. And then when you try and move the spacer, the stab wants to move around. This pretty quickly seemed like an exercise in frustration.

So I came up with an alternative method. I placed scrap lumber across the top of the h-stab, under the bottom of the vertical, and used that to support the weight of the front of the stab. Since the bottom of the stab skin slopes downward, moving this lumber setup forward or backward moves the nose up or down, allowing the hinge alignment to be worked out. And the stab can just be moved laterally to get it properly on centerline. Small clamped hold the lumber in place on the h-stab, and two quick-grips on either side of the vertical prevent it from moving laterally when I don’t want it to. And the real payoff is that the spar doesn’t need to be clamped to the joint plate, so the spacer can be easily and carefully positioned without disturbing the position of the vertical stab.

A look at this setup: 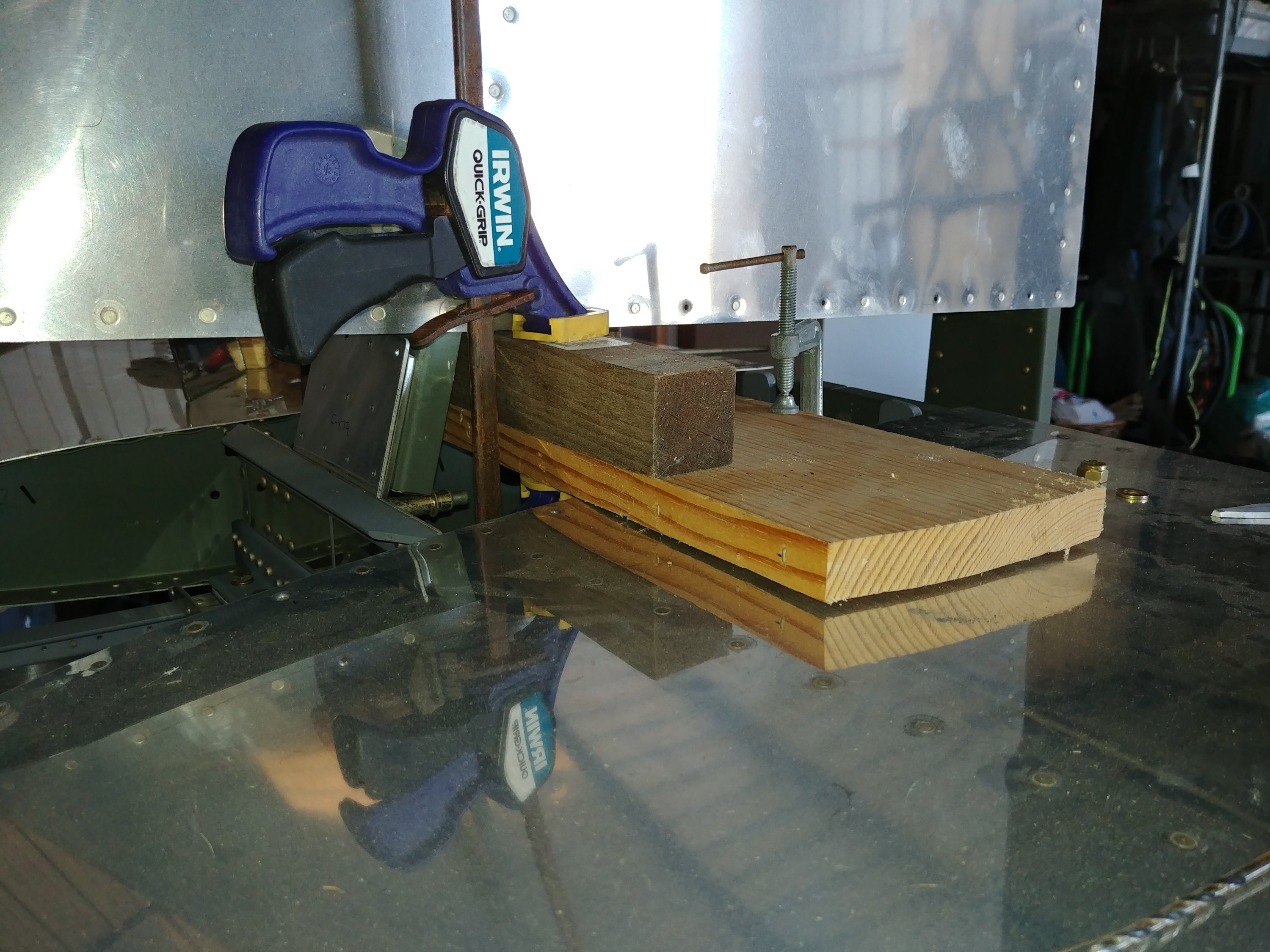 And a look at the forward spar, with the spacer lined up properly and clamped in place: 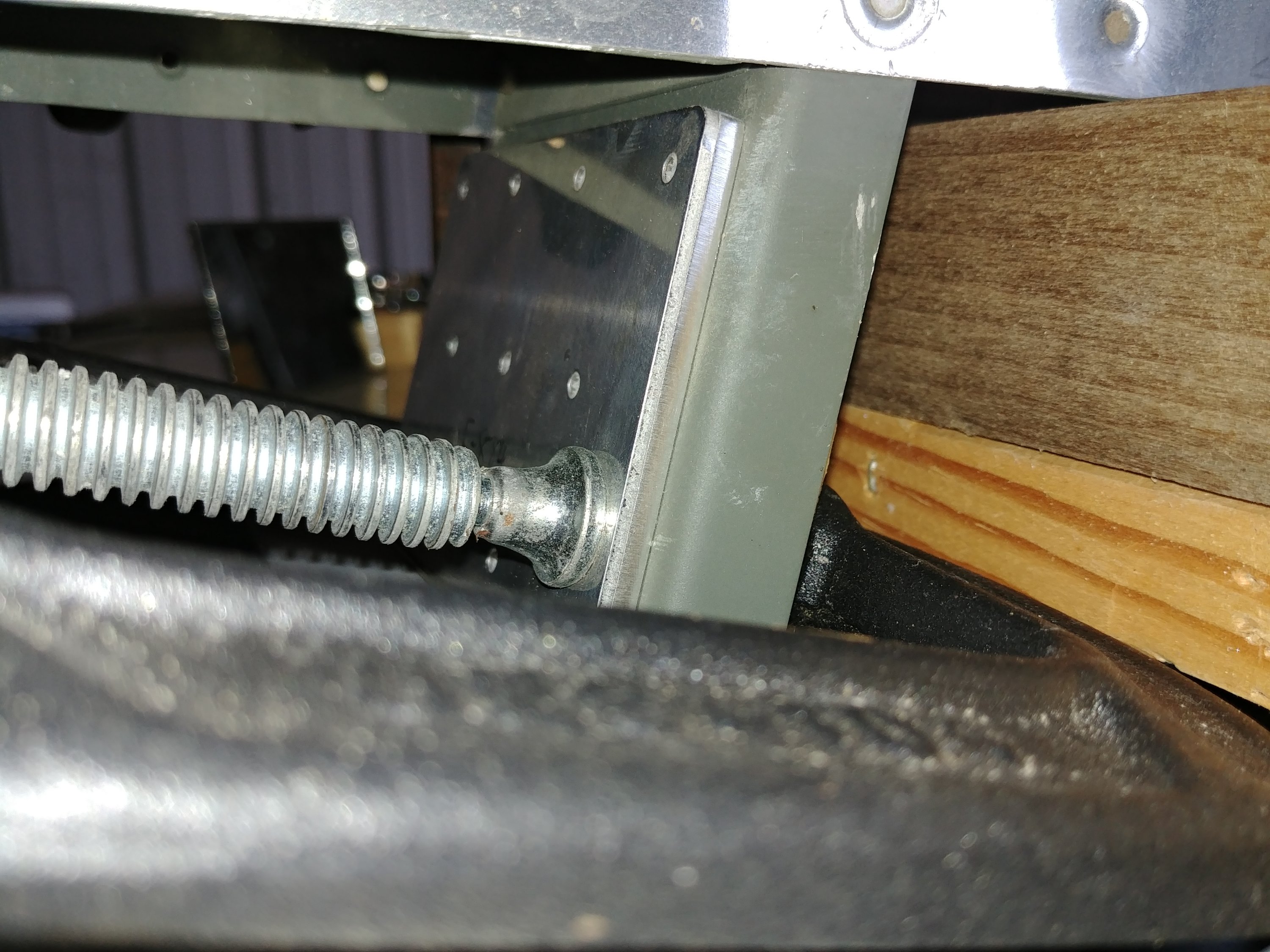 Then it’s time to double- and triple-check the alignment before drilling. The string through the rudder hinges is bang-on: 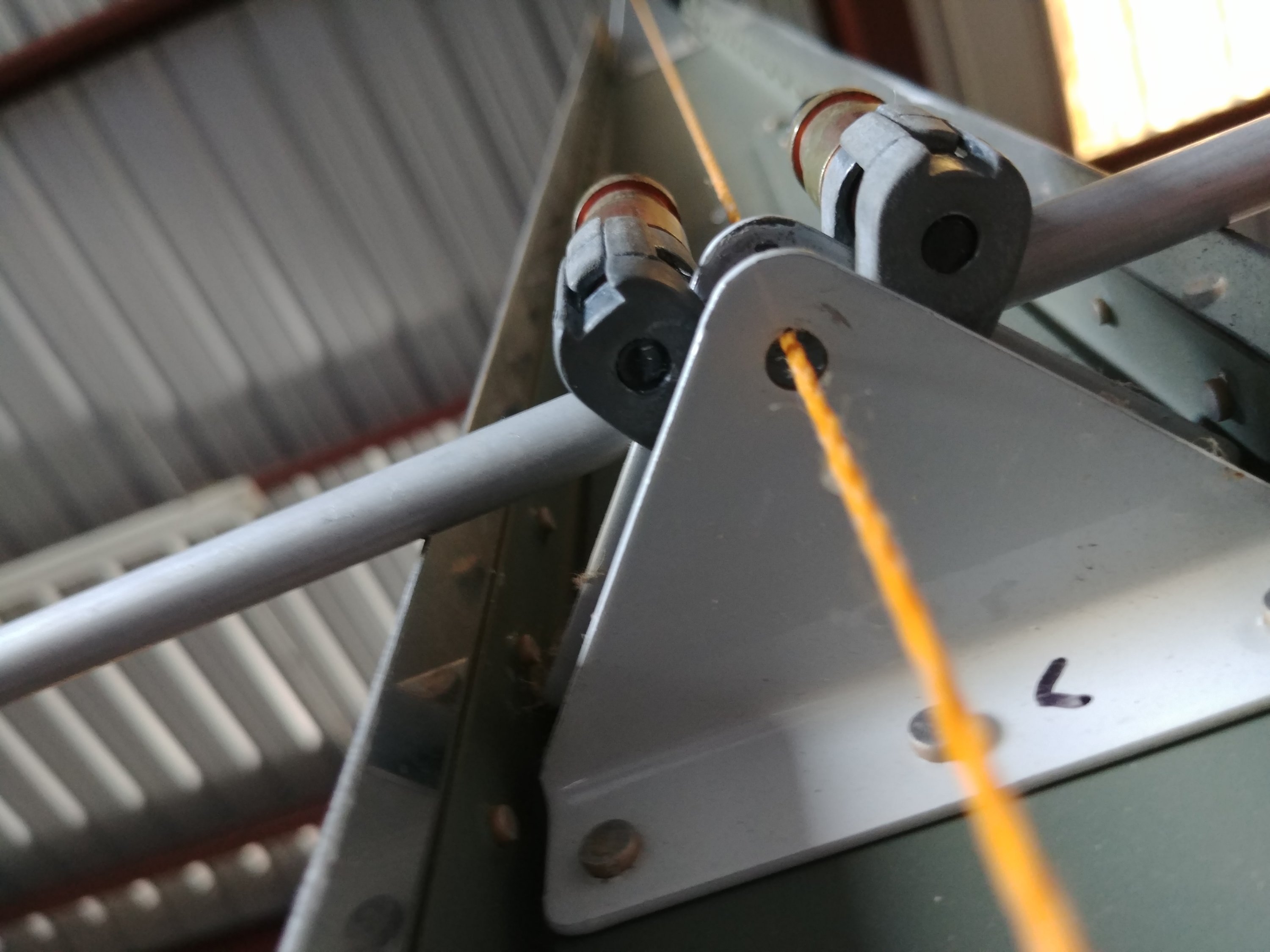 Back up front at the joint plate, we’re just using the prepunched holes in the joint plate as a drill pattern. The bottom row is easily access with a long drill bit. The middle row requires the use of an angle drill. The top row seemed impossible to access with the stab on the plane, so I decided to stop drilling here, remove the stab from the plane, and drill the last four on the bench. Even then, I had to switch to a super-short #30 bit in the angle drill to get in here. The basic issue is that the forward spar and the root nose rib form an acute angle, making things tight.

Here’s the whole setup prior to me pulling it off to finish the drilling: 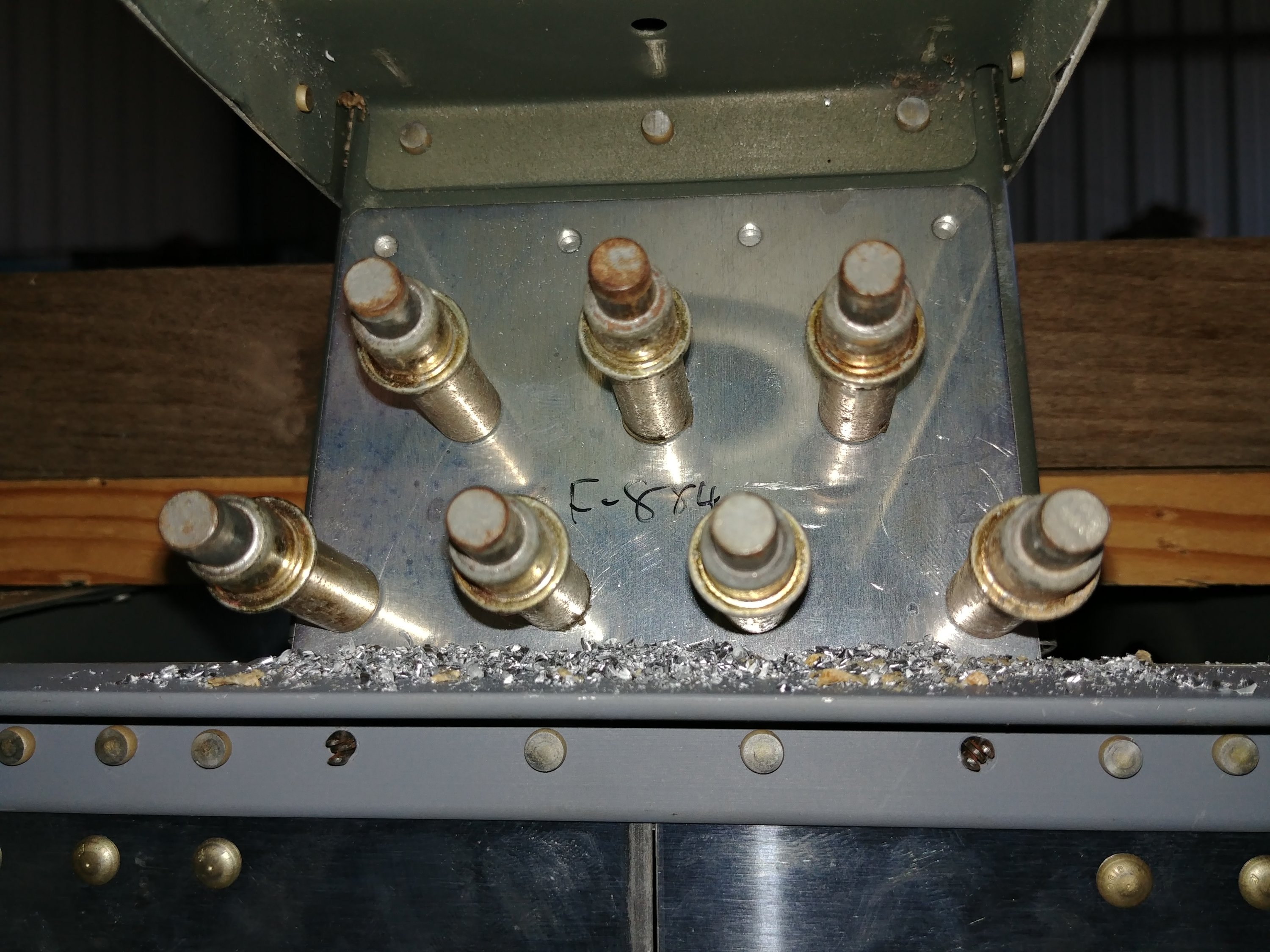 At this point, I was ready to just pull everything out, deburr the holes, rivet that joint plate and spacer on, and bolt the stab back on, this time semi-permanently (ie long enough to get some control systems put together). Unfortunately, when I removed the joint plate and spacer, I found a major problem. The bottom row of rivet holes is far, far too close to the end of the spar: 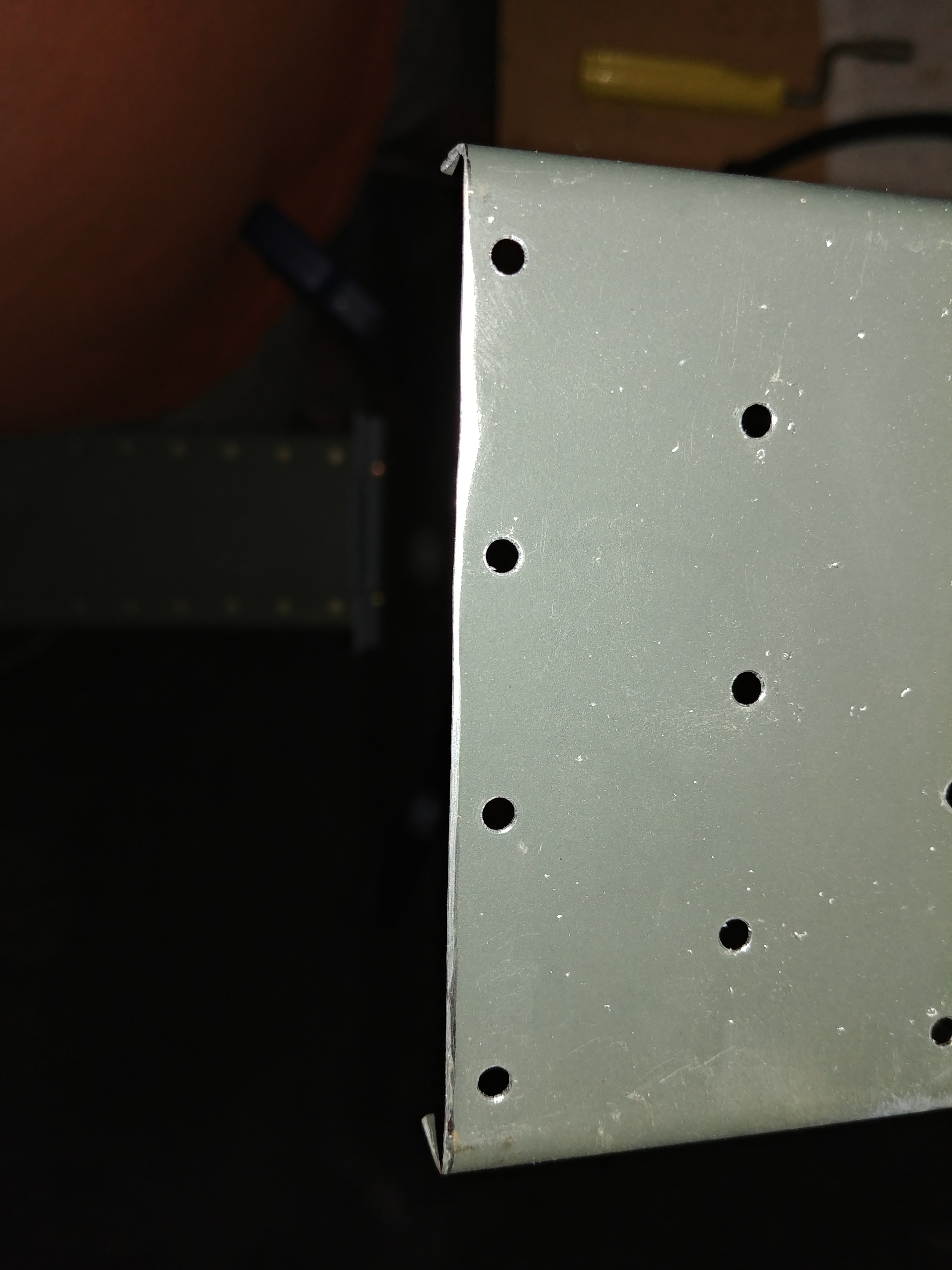 Minimum edge distance between a rivet and the edge of the material it’s in is 2x the rivet diameter from the hole center (or, by extension, 1.5x from the hole edge). For these 1/8” rivets, that makes the minimum edge distance from the hole edge 0.188”. The actual distance here varies from 0.129” all the way down to 0.103”. This isn’t just a case where things are a hair too close, this is a significant discrepancy – almost half of the margin gone in the worst spot. Moreover, these are the rivets that will hold the vertical stab onto the airplane, which is to say that they are in a structurally critical area. This is not a place where I am remotely OK with reduced margins.

Some searching on VAF reveals that this isn’t an uncommon problem (not surprising since you just blindly chop off some of the spar before fitting anything), and it sounds like the Van’s-recommended fix is just adding another row of rivets. There have been times when I’ve had a goof and reading secondhand Van’s engineering recommendations has been good enough for me, but on this case, I’m definitely going to email Van’s support and get a real, solid professional opinion.

Anyway, the end result of this is that that was the end of work for the day (I had other stuff to do around the house anyway). I’ll pick back up on the stab once I get a remedy from the mothership, and in the meantime I can probably go back to re-fabbing the center bearing spacers for the elevators. I’ll want to do that with the vertical stab off anyway, since its spar makes access to that area more difficult, and I need to work this out before I move on to rigging up the elevator control system.