OK, so I didn’t get the SB done this weekend like I thought I might. Temperatures here have finally been crossing into the 100s this weekend, which definitely is keeping the work sessions short. And today, I spent some time helping a neighbor unload an aircraft he bought, and also went to a flying club safety meeting that ended up running about three hours. So not a lot got done today, but hey, we’ll talk about it anyway.

First up was demurring the doublers. I ended up reinstalling the vise on the workbench for this, it made it a whole lot easier. It’s also necessary to radius one side of the doubler forks, to ensure it can nest properly inside the spar channel.

Next up are adding some markings to help with fitting and drilling the doublers. They already have some prepunched holes, but these are in addition to the holes that already exist in the spars. Those existing holes will be used as guides to add the additional holes in the doublers, and it’s necessary to ensure they have proper edge distance. We start by drawing a horizontal line using the prepunched holes as a guide.

Next, I added my own touch. I watched a Youtube video demonstrating the SB, and the guys doing that handled the edge distance issues by clamping the doublers, marking the holes in the spars, removing the doublers, evaluating edge distance, and then retrying a couple times. It seemed a lot easier to me to simply draw lines around the perimeter of the doubler, which would represent the closest that any hole could be to the edge. This way, when fitting the doublers, I can just ensure that none of the edge distance lines are visible through the rivet holes.

One of the marked doublers: 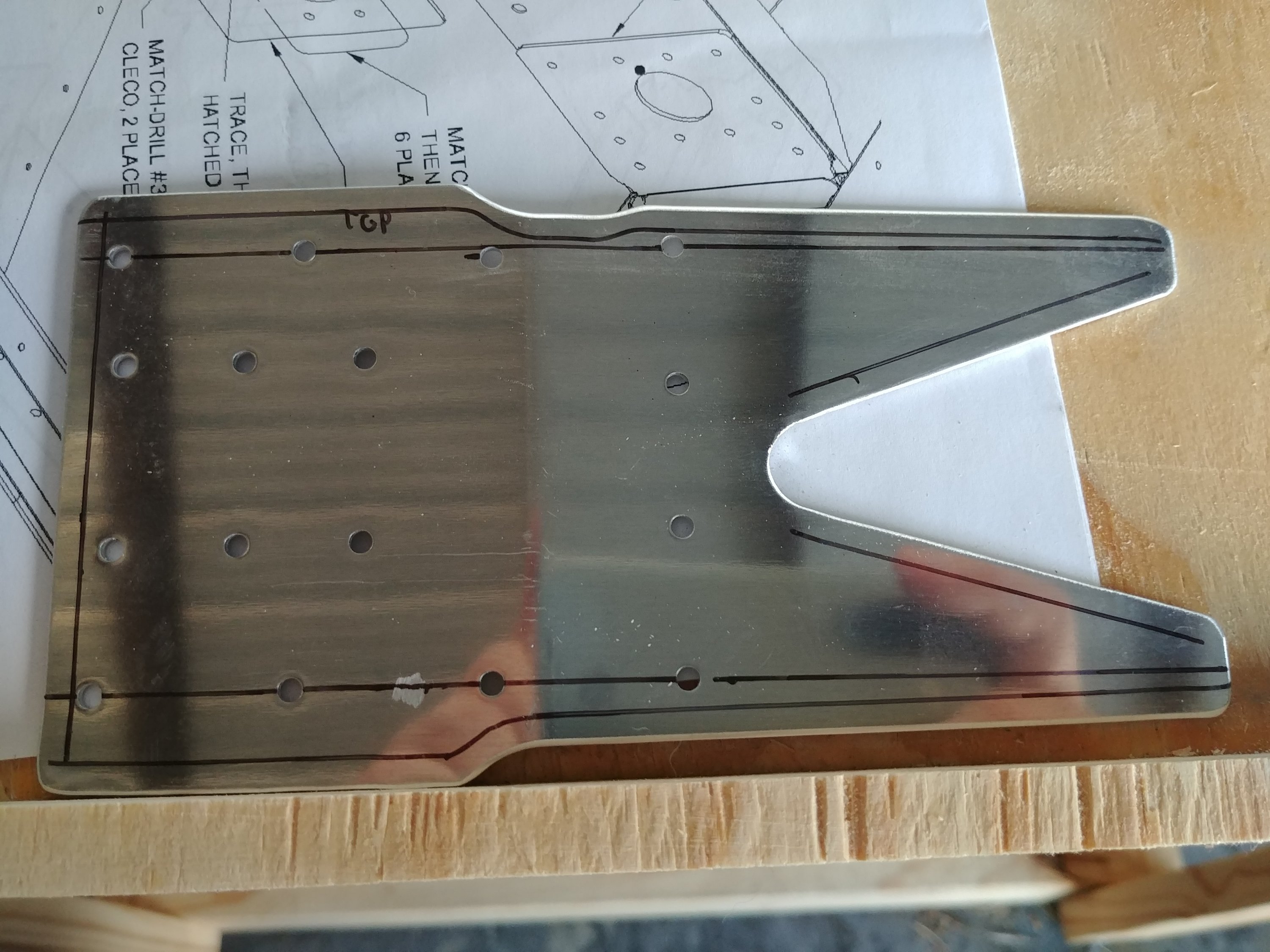 Next, it was time to fit the doublers. However, there’s another fitment concern here – it’s possible for the doublers to interfere with the vertical stab attachment, which goes right in the middle of that forward spar joint. I was starting to consider how I could mark the area to prevent this, and I realized that there was a much easier approach.

The vertical stab attaches at its forward spar using a spice plate, which is drilled and riveted to the vertical stab spar, and then bolts to the horizontal stab forward spar. The bolt holes already exist in both parts, though they’re currently undersize. But since they’re prepunched, all I had to do was dig up the splice plate and cleco it in place. This also has the benefit of tying the two spar halves together, making the h-stab a bit more stable in its partially-disassembled state: 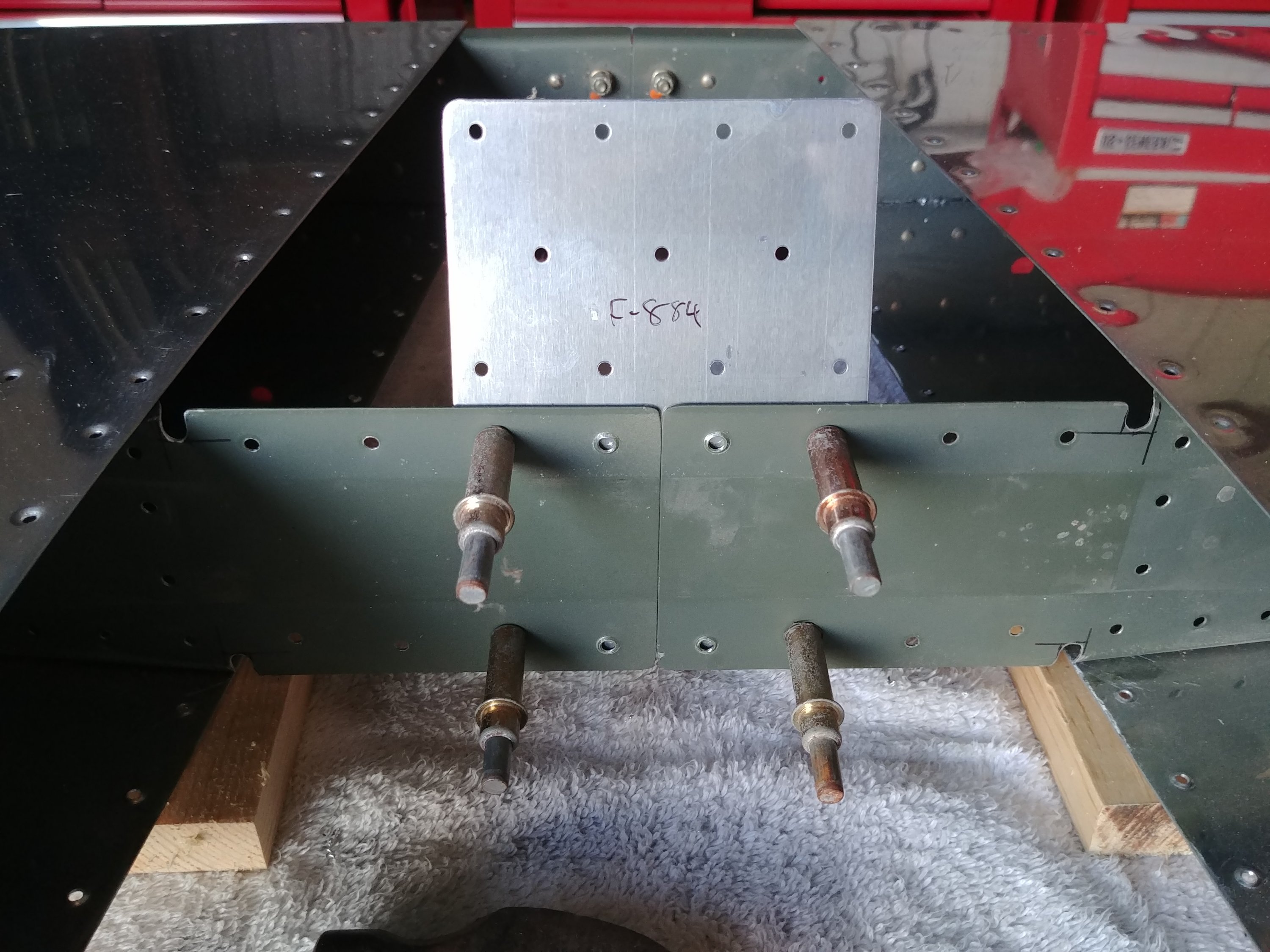 That was about as far as I got today. I did start fitting the doublers, getting them clamped in place and seeing how much fun it would be to position them properly, but I didn’t get any photos of that. I’ll pick back up on that task probably tomorrow night. For what are probably fairly obvious reasons, it’s really important to get the installation of these doublers right. Badly-placed or subpar holes here definitely have the potential to compromise what is an extremely important structure. So there’s going to be a lot of “measure twice, drill one” going on here.