Seat floors ready to be riveted

I did it! Two days in a row of getting up and getting an early start out in the hangar. I started carrying my 6 AM weekday alarm into the weekends about a month ago, but until now I’ve just been turning it off and going back to sleep. I think getting going early in the morning is going to be important to maintaining momentum here.

I did still have a few hours distraction, between going to have coffee with neighbors and doing some other work around the house. It also doesn’t help that once midday rolls around, I can only handle about an hour or so in the hangar before I have to go inside, drink some water, and cool off. But at least I’m doing stuff and putting up with the heat and not just deciding it’s too hot to work.

Anyway, today I launched into prep work on the aft seat floors. There are ten stiffeners in total, and thanks to the taper in the fuselage, they come in five different sizes. I got all those separated and deburred, and clecoed the whole assembly together (both aft seat floors and all the stiffeners. Next was getting the bottom half of the hinge that will serve as the attach point for the base of the rear seat back. This only had a single #40 reference hole in it, so it had to be carefully aligned and drilled, using the prepunched holes in the floor as a guide.

Hey look, a photo of everything clecoed together! 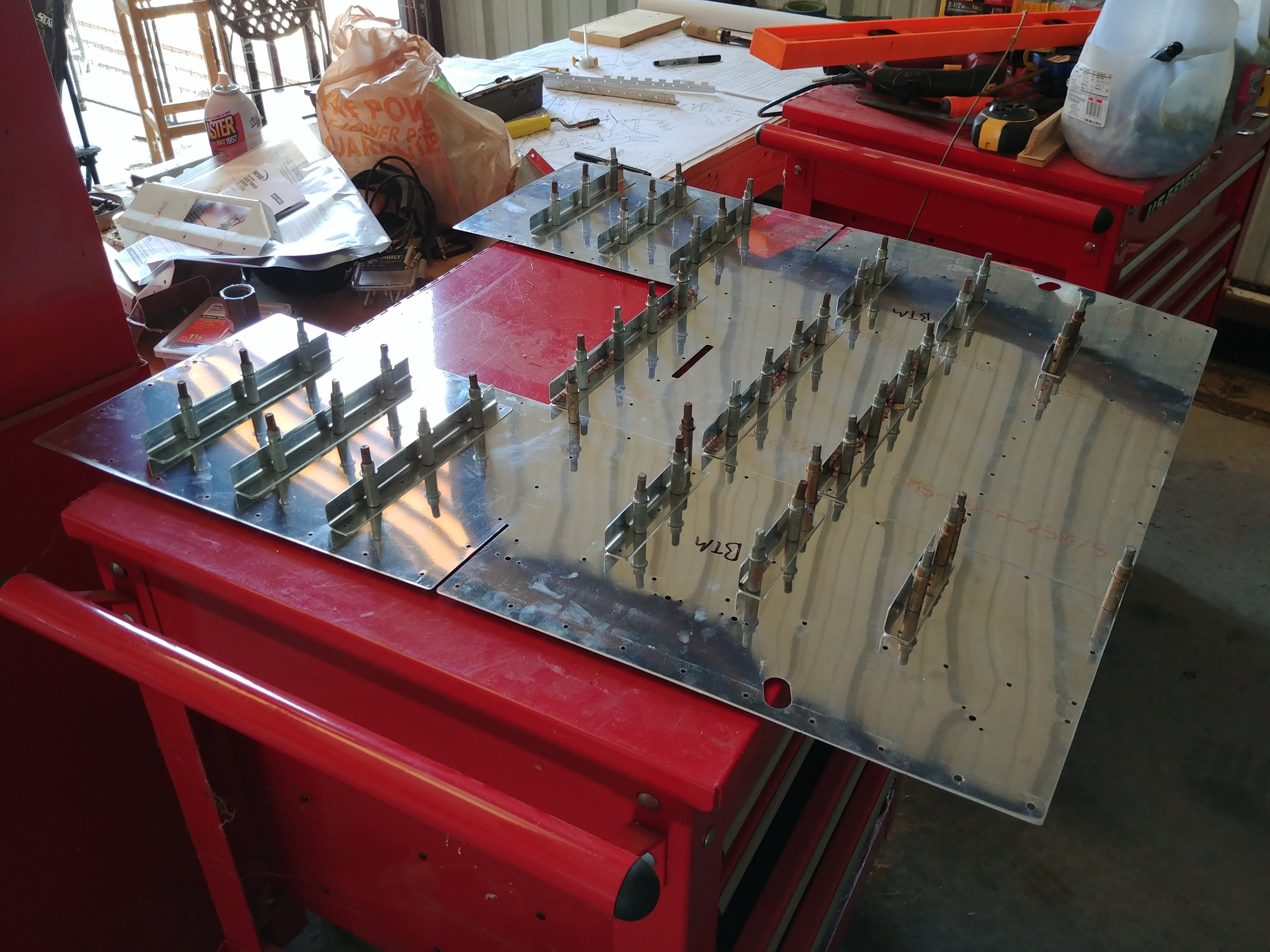 Interestingly, the manual never actually says to final-drill the rivet holes between the floor and the stiffeners, but pretty quickly it jumps to deburring the dimpling them, and obviously final drilling is a prerequisite for that work. Then everything came apart and, yup, time for a bunch of deburring. This included not just the stiffeners’ rivet holes, but also all the #30 holes between the floors and the seat ribs in the fuselage, which were match-drilled a while back. And that meant deburring all those seat rib holes too…that was a bit tedious.

Finally, I broke out the squeezer and C-frame and got all those #40 holes dimpled. Next step: a bunch of back riveting!

This is actually where the manual gets a bit interesting. It says to rivet only some of the stiffeners, not all of them. I’m not really sure why some of them need to be delayed, I want to read ahead and see if I can figure it out. I’d prefer to get everything riveted in place and go ahead and prime and paint the floors, but I want to do that as late in assembly as possible, especially in this case since back riveting would probably mess up the paint and I’d have to touch it up.

At some point I need to go way back in the manual and finish riveting the forward bottom skins. Back when I was doing that, I got as much done as I could by myself, but decided to move on to other things and recruit Josie to help later on. Well, it’s really later on now…I did broach the subject, and she seemed up for it, Maybe we can get it done next weekend, or one night this week. If I recall correctly, it’s not really a ton of rivets, and could probably be done in one solid work session.

All this is just putting me ever closer to the really fun job of hanging the horizontal stab. Except I suppose I should tackle the service bulletin fix first; in case I ruin the thing, I’d rather not go through all the work of fitting it first…