So I spent most of the day working outside, yard work and so forth. But after it got dark and I had some dinner, it was time to get out and do some plane work. I started off working on the console, as mentioned last time. It turned out there wasn’t a ton to be done with this thing. Really, there are just two screw holes at the aft end that need matching holes drilled in the center bulkhead cap it mates to. So it was just a matter of attaching the console with a few screws, drilling those two holes in assembly, and then removing the bulkhead cap and installing nutplates in those two holes.

After the, next up was making the cable anchor that will go inside the throttle quadrant. This piece gets fabricated from raw aluminum angle, and while it’s not hugely complex, it does take some work. Here’s the raw angle sitting beside the depiction on the plans page: 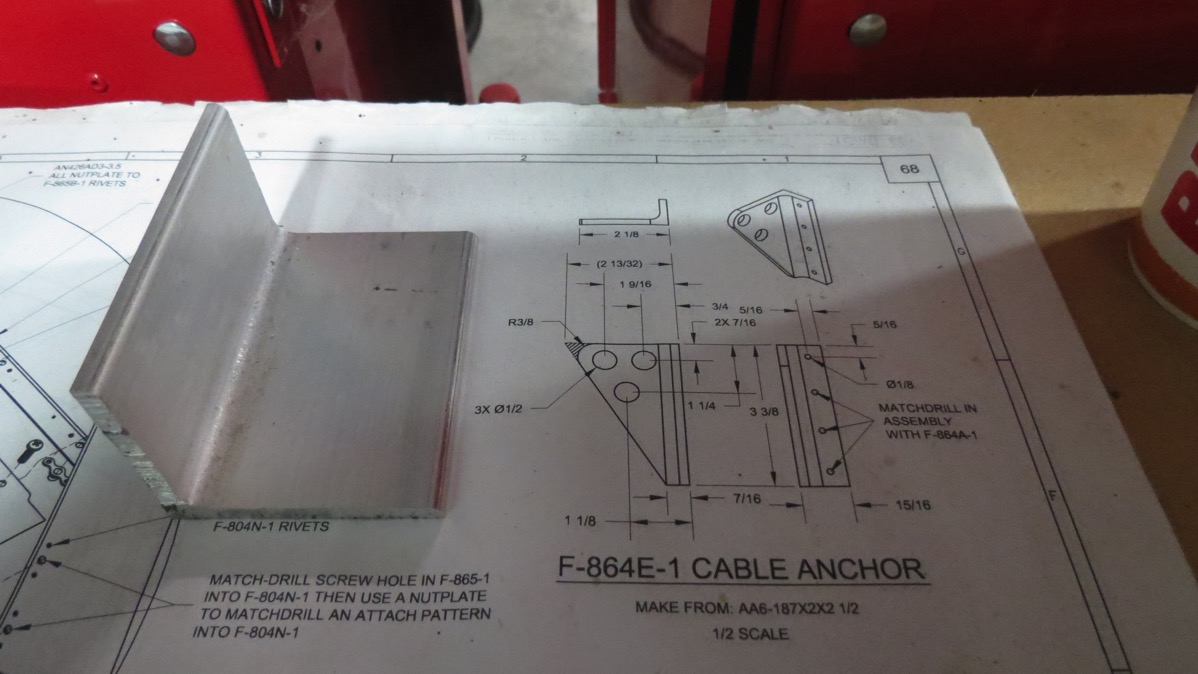 First up was trimming the angle down to rough size. Next I laid out the triangular section, drawing the main cut line. The fun part was figuring out how to draw in the 3/8” radius at the corner. I started to look around for round things that would hopefully have the proper radius, and then it occurred to me that I had just the things for a job like this – my socket set. Easy enough to find a socket with the proper outside diameter, which I used to trace the radius: 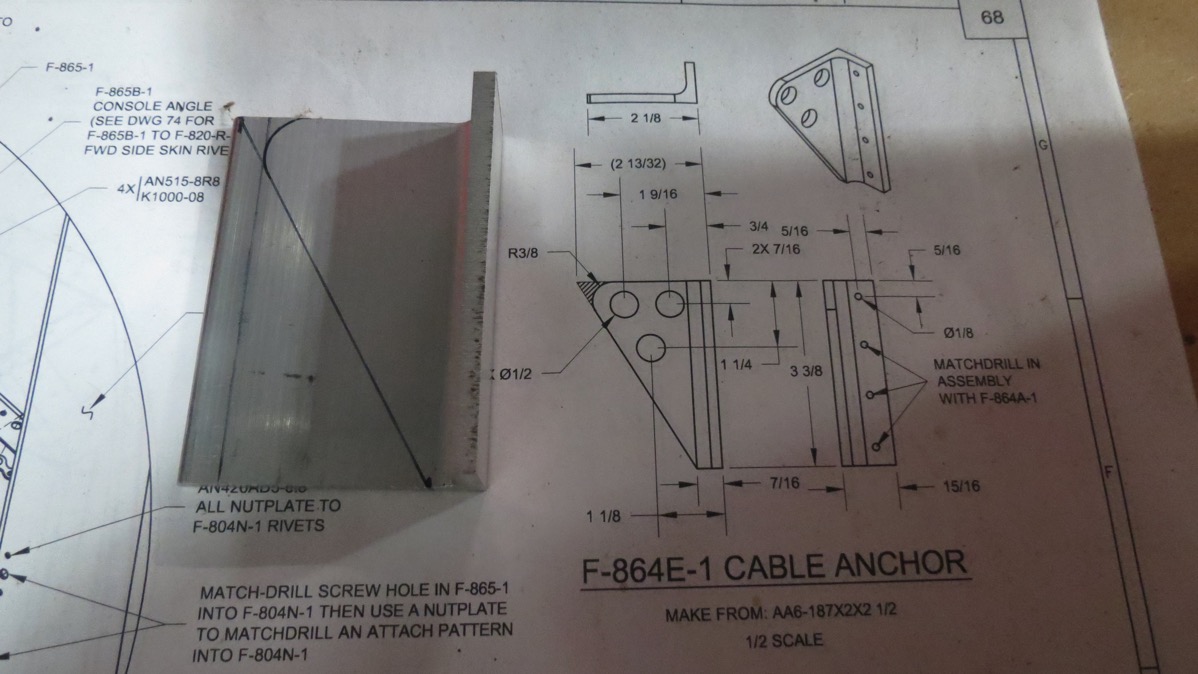 Then there was a lot of bandsawing, filing, shaping and smoothing on the bench grinder, and so forth. Oh, and I also had to drill the three 1/2” holes for the anchors themselves. Again, not too bad, just being careful about the locations and stuff. The only fun part is that I don’t have a good quality 1/2” drill bit, just the one in my cheap generic drill bit set. So I ended up drilling the holes with the largest nice bit I had (7/16”) and then opening them to final size with my unibit. And since the angle is thicker than each band on the unibit, I had to do this from both sides. And then I got to working smoothing the inside of those holes, which were just a bit too small for my dremel sanding drums to go into.

Finally, there was just the matter of drilling the four holes where this will attach to the quadrant mount. Here’s the anchor clecoed in place to that mount after the holes were done: 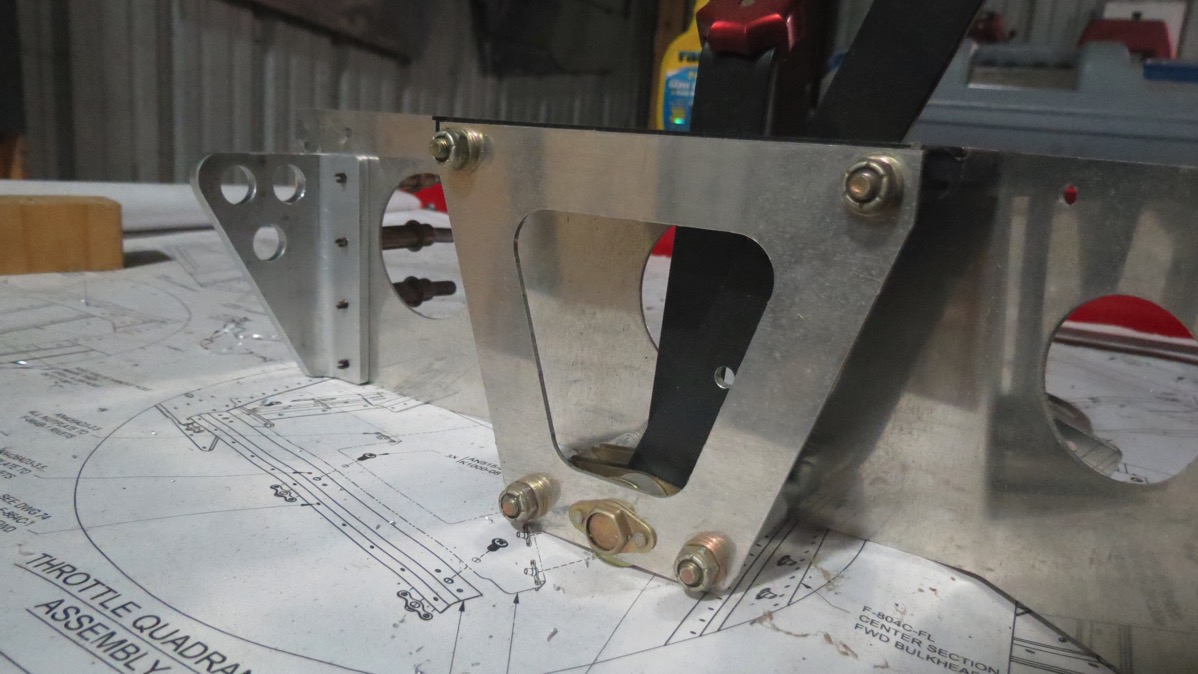 That just left a bit more to be done. Interestingly, these holes won’t be used to rivet the anchor to the the mount; it attaches with screws. But it doesn’t use nutplates either; instead, the holes in the anchor get tapped for 8-32 screws, and then the matching holes in the mount are opened to #19 for the screws.

And then it was time to go inside, feed the dogs, and relax for a while. I still need to do some deburring and cleanup work on the throttle quadrant mount, but before I do that I have to remove the actual quadrant, which is there from when I did the rear throttle sometime far in the past.