So tonight’s update includes a fun bit of black comedy. Last time out, I’d discovered that I couldn’t use one of the screw locations for the left-hand mid cabin cover because there was already a screw for the fuel selector mount there. I’d also mostly decided to just fab up a new cover so I could relocate that screw hole and not have a random empty hole in the cover.

Well, after thinking it over, I decided to do just that. So tonight, I cut off a section of my junk leading edge skin, traced the outline of the cover, cut the new cover piece out, got all the edges to match up really nicely, cleaned it all up on the bench grinder, and sat back to admire my workmanship. It was actually way easier than I might have expected. All I had to do now was transfer the screw holes from the old cabin cover to the new one.

It was literally the moment I finished drilling the second hole that I cursed, um, kinda loudly. Because the hole I’d just faithfully transferred from the old cover was the one I needed to relocate. Basically, by drilling that hole I eliminated the entire reason for jabbing up a new cover.

I could have made yet another cover, but I decided that maybe the thing to do was to just use the existing cover after all, and deal with the empty hole. It’s not going to be especially visible. And then it occurred to me that there was a much easier solution I could have done from the start: just fill that empty hole with epoxy. The cover’s going to get painted anyway. That at least made me feel a little better.

So with that, I got to prepping the cover, just cleaning up the edges and doing a couple test-fits. Next I marked the location of the new screw hole and drilled it in the cover. Then I screwed the cover in place with a couple of the preexisting holes that already had nutplates, and drilled the two holes in the longerons for the outboard screws. Next, while everything was still held in place, I got under the cover with a sharpie and traced out the cutout and three screw holes for the fuel selector. Off with the cover, drill the three screw holes, and cut out the big center hole. Nothing fancy here, just working with the unibit to get started and finishing the hole with the dremel.

Then it was time for the real test fit…can I actually install the selector? Answer: yes! 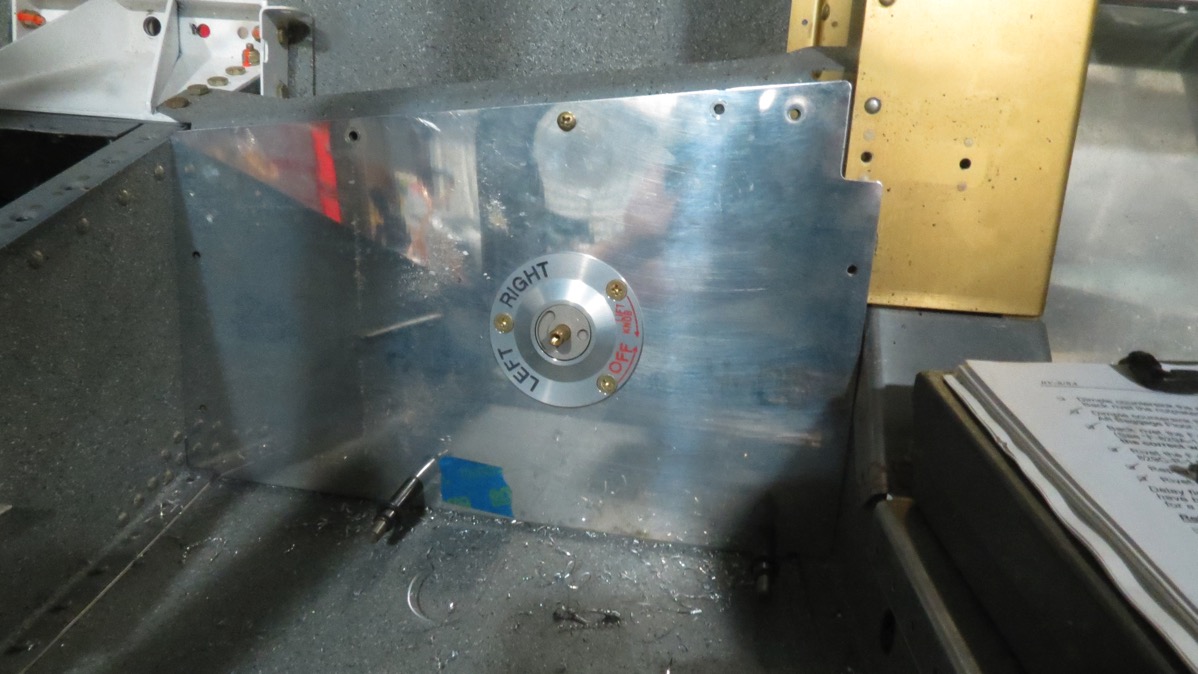 With that done, I removed the cover again, went over to the workbench, and set about filling the unused screw hole. I deburred the hole more than I usually would, in order to create a chamfer on both sides – that should help the bit of epoxy I put in there hold. Then I mixed up the epoxy, set the cover over a piece of wax paper, filled the hole, scraped off thee extra, put another layer of wax paper on top, and capped it off with a piece of lumber and two buckets of clecos. Tomorrow I should have a nice plug…I hope, at least. We’ll find out how well my idea worked then.